It is the middle of the morning as I sit here writing, but it seems dark outside. A steady rain is falling, the distant hills are masked by fog, and the underside of the sky is a stifling shade of gray. Even here at the edge of the season's first nor'easter, several layers of thick wet clouds obscure the sun's light. Maybe there will be snow later in the week, or maybe not. We are now at the whim of the iceman.

I flew home from Syracuse this morning in the rain, and I peered into the featureless gray of the clouds for a glimpse of his face. The temperature outside the plane had dropped to thirty three degrees, and I was expecting to see snow mixing with the rain. The iceman wasn't there, but I did see some of his work on a beautiful morning, earlier last week.

It was a morning after a clear night had brought the first frost to many areas, but Syracuse laid under a blanket of lake- effect clouds and rain showers. The usual cruising altitude of 6000 feet was just above the cloud tops, in air that was well below freezing. The white expanse of clouds below me was not as flat as usual, and northeast of Ithaca, I had to tunnel through a ridge that crossed my path. As the clouds swallowed the airplane and blotted out the sun, I looked out to the leading edges of the wings and saw the season's first ice forming on the plane.

Continuing southwest towards Elmira, the lake- effect undercast disappeared, and I gazed at lush green grasses and green leafy hills. Islands of white frost floated among this landscape, filling the low areas that are sheltered from the breezes and accumulate cold air on clear autumn nights. Descending for landing, I passed two thousand feet over Odessa, and couldn't help but marvel how vibrant and vivid the world seemed in the early morning sun.

I had to wonder about how the plants react to the coming winter. It seems to me that just like us, that they try to ignore the coming of winter as the days turn shorter more quickly. The fields and woods seem dull on an afternoon's walk in early September; the plants seem dry, as though they are bored. With the coming of the first frost, the tempo seems to pick up, and the greens are greener and the flowers are brighter. The trees gradually trade their brighter green for shades of yellow, orange, and red.

Part of this transformation is the result of cooler temperatures and increased rainfall, but every year there seems to be a sharp change in nature's world after the first frost. It is as though the trees and plants embrace their fates and make one last and glorious show before their souls are lifted to heaven. I see this from the plane, but it is an observation that I have made year after year with my feet on the ground.

As I descended lower and passed over the high ground south of Odessa, the iceman gave me a steely flash of his eye. I looked to my right just in time to see my shadow pass into a deep green alfalfa field. With the airplane directly between the sun and the dew- covered leaves, the field filled with a shimmering silvery light, a cold metallic brilliance that was devoid of both color and life.

Gone for now are the scorching summer days when we could say with assurance "at least it won't snow today", and gone are the evenings when I can look at a forecast of bad visibility with low ceilings and say "that's OK, at least there won't be any ice." Whether we like winter or not, for the next six months we will be working to keep the iceman at bay. 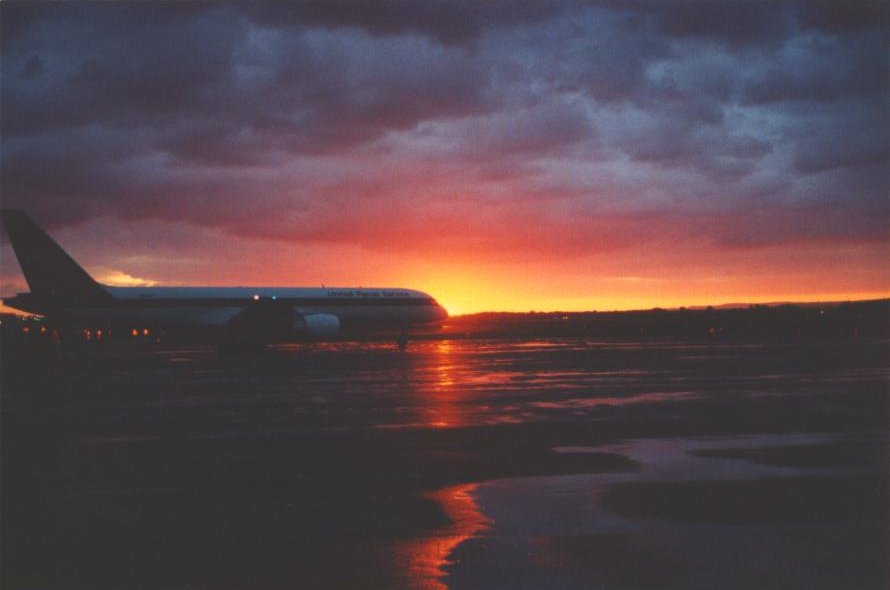 This is how the iceman's first morning started. The sun is just breaking the horizon on the freight ramp, yet there are clouds overhead, and a light rain is falling, as evidenced by the roughness of the water in the foreground. This is not unusual in lake- effect country, where clouds and precipitation are generated by the warmer lakes and driven over the land. In the distance, where the sun is rising, there are no clouds because the horizon is far enough from the lake on this morning.

Near Ithaca the lake- effect clouds start to break up below and around me. 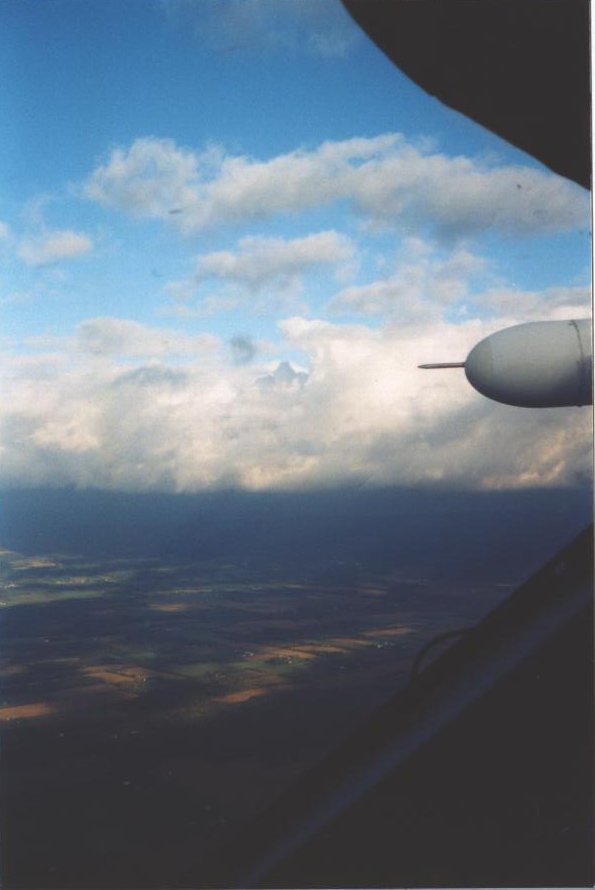 In clear sky past the range of the clouds, I looked back to see the weather that I was leaving behind. This picture shows a cross- section of our typical winter sky; a layer of clouds resides between four and six thousand feet whenever the wind is out of the northwest. Above the clouds the sky is brilliant blue, and folks beyond the reach of the lake- effect clouds enjoy a sunny day. All we see is gray sky and snow flurries.