I was on top of the world, seemingly one hand on the pulse of destiny and the other hand set upon the tiller. Behind me was a long week of dark nights spent in the airplane, making four flights throughout the course of each fourteen hour shift. Ahead was a week of vacation.

I had been to the city, and even at midnight the traffic into the major airports is busy. Passenger flights dominate the daytime schedules, but late at night and in the predawn hours, freighters come and go in surprising numbers. Just like the barn dances of old, the controller keeps a cadence with his steady stream of calls, and the airplanes dance through their moves so that we each arrive in a nicely sequenced lineup for landing.

The week had also brought a few hints of winter weather. During the first part of the week we could fly through clouds with complete impunity, something we have enjoyed since the weather warmed last spring. By Thursday night however, the temperatures aloft had dropped below freezing and flight through clouds brought accumulations of ice. Temperatures dropped and the winds picked up. For a few flights it was wintertime.

Friday morning had brought sixty mile per hour headwinds aloft and forty mile per hour gusts on the ground. Snow squalls had been forecast, but they never materialized; Friday night's flight was in clear air with stars above and the lights of Rochester visible from fifty miles away. Saturday morning dawned with just enough haze to accentuate the clearer air at cruise.

I sat in the plane and looked around at a blue sky which stretched forever under patches of cold white cirrus clouds. Our wooded hills, conspicuously brown, carpeted now with dried and fallen laves, melted into the thin haze. A few puffy clouds floated at the top of the haze layer, as though the picture needed one last splash of perfection.

I felt free, in command of my destiny. I thought back thirty years to the first "energy crisis" in 1974. Gasoline could only be purchased on odd or even days according to your license plate number, and there was a maximum purchase of three dollars. (Eight gallons?) . I remembered a particular Friday night, a payday night, and I had been able to accumulate a full tank of gas in my car. I was single, I had money, and I had gas. I was free.

Just as then ... just as ever... the work of climbing the mountain is what makes the view so satisfying. Each night this week I had set out for a full tour of the northeast's traffic and weather, knowing that after five years there are few things I haven't seen or done. Each night though, I was aware that there are a thousand ways of ending up scared or embarrassed by some foolish mistake or twist of circumstance.

We are such silly creatures. We seem unable to appreciate the simple pleasure of a lazy summer breeze unless we can recall the biting winds of a winter blizzard. If things seem too peaceful for too long, we seem to find ways of developing conflicts. Flying's continuous flow of challenges and rewards keeps me satisfied and out of trouble.

Saturday morning brought a bright and happy sky at the end of a dark week, and sunshine with moderating temperatures was forecast for the weekend. With the winds on my tail, I sat on top of a cloud at the edge of a week's vacation. I felt like I had the world on a string, and I savored the moment. 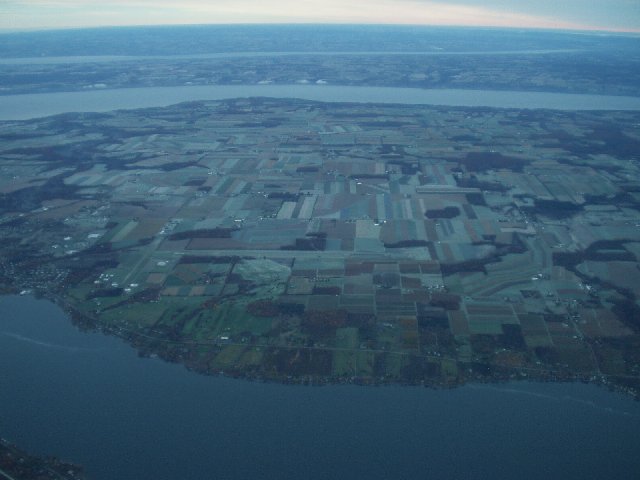 The east fork of Keuka Lake is in the foreground, followed by Seneca and then Cayuga Lakes. Penn Yan is at the very left edge of the photo. The Great Lakes plain ends right about the right edge of the picture, and the land breaks from the flat fields with sweet soil to rolling hills with acid soil

Note that the ground is frosted except where it is "in view" of the lake. 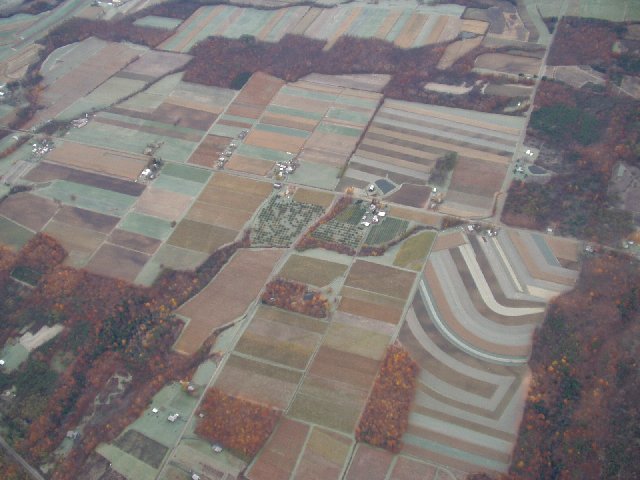 Cultivation patterns of the fields between Penn Yan and the start of hill country. The frost puts an autumn dressing on the ground. 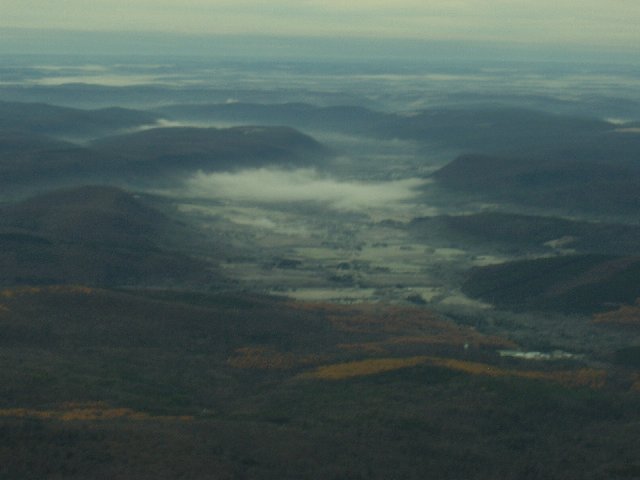 Not the prettiest picture I have ever taken, but it shows the difference that a few miles and a bit of elevation makes.

This picture was taken a few minutes after the first picture, and through the right window rather than the left window. It shows the valley near Monterey NY. Note the cloud laying within it and note that the frost has gathered in the low lands, and is not apparent at the higher elevations where the cold air can "drain" away. 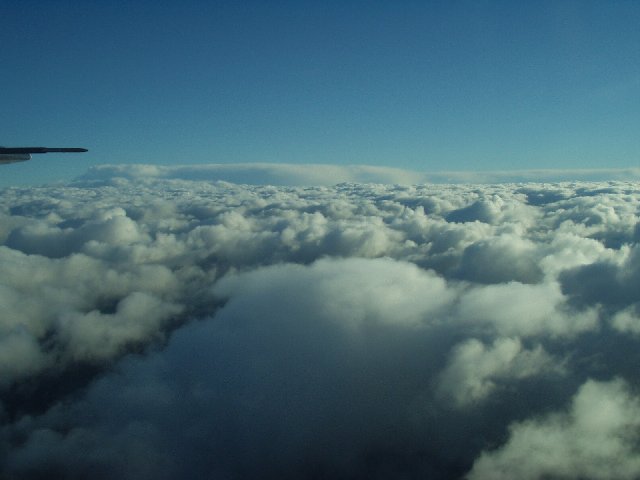 A prettier picture, one which embodies the title of this essay, "FREE"
use your back button to return to the Table of Contents
Plane Talk Archives
Return to Home Page
E- mail Bob Tilden