I sat in the plane and listened to the engine drone on as the white clouds slid below me. The sun was bright on my eyes and even made my face feel warm. I have a tendency to think about three or four things at once, and as I wondered why I can never get my paperwork done en route, I wondered what I do instead. I interrupted this thought with a passing revelation that, for a fellow who lives in western New York, I must be pretty close to heaven. I was warm, the sky was sunny, and I was free of the frozen gray agony of winter.

I chuckled too, that the loading crews were feeling sorry for me this morning. They were on the ground, amidst swirling snow, in and out of the cold, or huddled around little heaters if they were lucky. "Poor Bob has to make a double trip this morning", they said. Recently, some of them have asked "If we load the plane, are you really going to fly it in this weather?"

The winter is starting to wear on people. On Friday night even the air traffic controller was complaining to another airplane how Rochester hasn't had ten miles visibility in the last ten days. Saturday morning's Rochester paper was headlined that the past 19 consecutive days of snow have set a record. Sitting in the sunshine for the moment, these thoughts seemed far away.

I thought of a poorly- remembered childhood story of Bra'er Rabbit, who begged the fox not to throw him into the briar patch; The fox was such a malevolent creature that he threw the rabbit into the briar patch rather than eating him. Bra'er rabbit, once amid the thorny briars, lived happily ever after among his brothers sisters, aunts and uncles, safe in the briar patch where no predators dared enter.

The sky has been my own happy little briar patch so far this winter. My personal rule of thumb is that "any weather that doesn't stick to the airplane is not a problem". Once the airplane is in the air, snow just blows right on past it, just as it does a car. The extreme cold that we have had for the last two weeks has minimized the chances of airframe icing in flight. Just as Bra'er rabbit's family accommodated the thorns in exchange for their safety, I have gladly accepted the discomforts of the cold.

Over the last month, I have half- frozen while I supervised the loading of the airplane and tended to the paperwork. I have rolled gingerly along icy and obscured taxiways, sometimes moving sideways like a floatplane pilot taxiing across the wind. I have required "slime", a fire- hose sized spray of steaming hot glycol to deice the airplane almost every morning. There is a lot of frustration and aggravation generated when people and their machines try to keep a schedule in the pits of winter.

I have endured all of this among people who are on the ground and suffering all the discomforts that I have felt. Each morning and evening I have left those people behind and basked in the comfort and warmth of a good airplane, usually above the lake- effect weather. Usually I have watched the morning sun break above the undercast, and I have admired the big dipper, still standing on its handle in the evening.

My customary morning flight is just a return from Rochester to Elmira but Saturday morning's freight load required an extra round trip. Elmira was merely snowy and gray, but the snow in the Rochester area kept the visibility down to a mile or so. Three times I left this murky and miserable world to bask alone in the sun that beamed brightly down into my briar patch.

I am waiting my turn on the deice pad. An AirTran jet ahead of me is all but swallowed by the steamy deice blast. Note that even if the jet wasn't there, there isn't much to see due to the poor visibility in snow and fog. 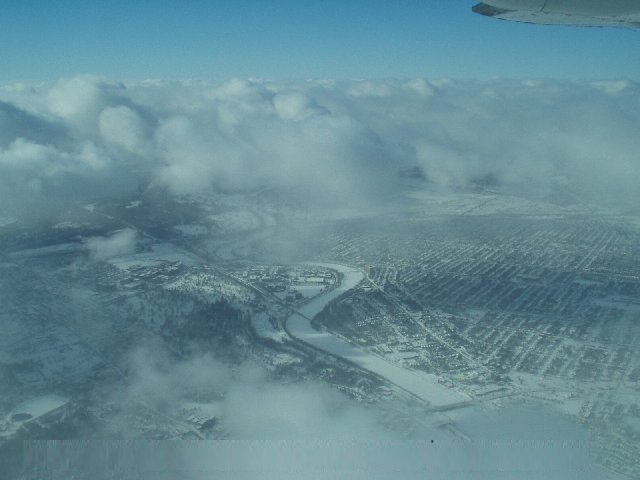 This picture was taken just a bit later, next to a hole in the snow clouds over Rochester. Note the unbroken expanse of blue sky above the clouds, and recall how cruddy the weather looked below them. Getting on top of the weather is like magic!