One of the other pilots at work has been building an acrobatic airplane at home for the five years that have known him. With more care and vision than most of us can muster, he has been cutting and fitting little pieces of wood and steel together, gluing or welding them into place one at a time. It takes an unusual amount of faith and perseverance to build an airplane, but he would know because he had built one many years ago.

This fellow, Ray, came to the point in his project where he was listening around for a good price on an engine for the new airplane. Almost two years ago he was told that a good solid engine, just the one he wanted, was available at a reasonable price. The only problem was that it had an airplane attached to it.

He was buying an engine for his project airplane, but he worried that the airplane attached to the new engine would distract him away from his project. So to speak, he rolled the dice, and things have worked out well for him. The airplane is a Pitts Special, another acrobatic airplane and identical to the plane that he had built years ago. There was a reason for the low price, but his familiarity with the airplane led him to the cause of the trouble. With a little work he made a "lady" of the airplane.

I invited him to fly out to have breakfast or lunch with the gang but he always declined, and I stopped asking. My idea of fun with an airplane is flying a short hop to another grass airport, but there are other pilots who don't understand flights of less than a thousand miles. Ray's idea of fun is to go out and do loopty- loops and be back in half an hour.

I don't enjoy Ray's kind of flying because it makes me woozy; loopty-loops are an acquired taste. For Ray to do my kind of flying would be almost as uncomfortable, because his plane is so different than a normal airplane.

His plane is optimized for zooming and looping, and for twisting all around in the sky. It is as small and as light as possible, has two sets of wings, and a 180 horsepower engine. Speed is fairly meaningless for an acrobatic airplane, but an ability to climb and descend rapidly is important. The two pairs of wings, with the cross- bracing of struts and wires between them, makes the plane exceptionally strong but also creates a lot of drag. With 180 horsepower to pull the plane through the sky at the slower loopty-loop speeds though, the drag is not an issue.

For him to fly his plane fifty miles for breakfast though, would be like driving the trip in an old farm truck... He would barely be comfortable, the engine would flail as though it was in second gear, and he would burn gas like he was going uphill both ways. It can be done, but it costs a lot, especially since the bigger engines can't burn the cheap gas that putt- putt engines can. A trip in his airplane is not done on just a whim.

Ray and I spend a fair amount of time together in Elmira and Rochester every morning and night, and he tells me about loopty- loops and I nod. I tell him about floating along en route to lunch, and he nods. We both like airplanes but he has no appetite for breakfast flights, and I have no appetite for anything after doing loopty-loops.

Last Friday, on my way to work, I stopped to see if the ground at my favorite airport would be dry enough let my plane go flyin' this weekend. As I walked along the hilltop runway, I heard the sound of an airplane coming closer. I didn't even have to turn around to know that Ray was out flying, and had seen my car. He buzzed past at a respectable altitude and then pulled up, rolling the wings round and round as he climbed. He did loops, rolls, cuban eights, hammerheads, and other stuff that I either can't spell or don't know what is.

I admired the ease that the plane went from down low up to fly-speck altitude, and back again. The airplane flowed through the air with the grace and ease of a figure skater on ice, or dancers across a floor. For a moment I wished that I could own so much of the sky all at once, and to work it as easily as he did.

It was a short view into Ray's World, a sort of parallel universe that coexists with my own. We have both made flying the centerpiece of our lives, but each of us have been drawn to entirely different areas of it. Watching Ray was fun and to a degree inspiring, but I think I'll stay with the kind of flying I do best... the kind that involves food. 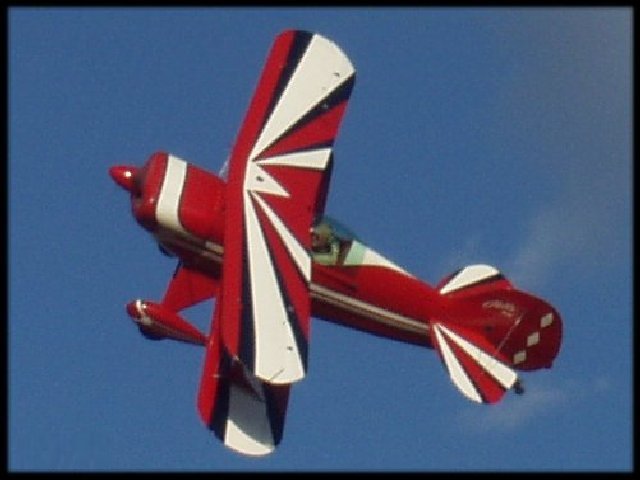 A telephoto and some enlargement brings Ray and his Pitts Special in close. It is a small plane, with a wingspan of less than 20 feet. 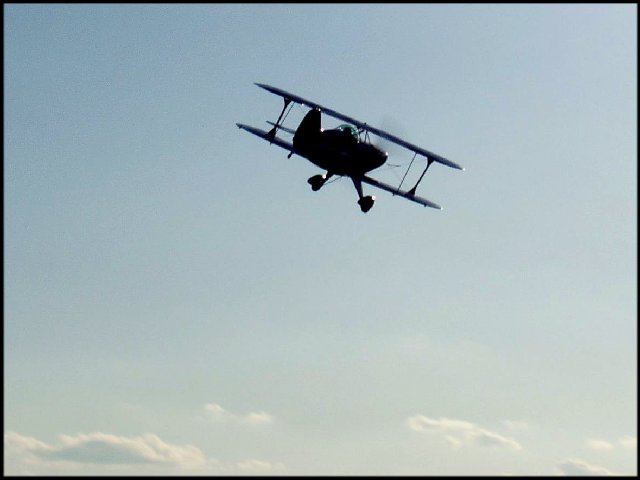 The plans hangs motionless in silhouette, flying towards the low sun in the west.