I had a good week. At its beginning I looked with icy wings at snow- covered fields far below. At the weeks end, I looked down at farmers planting corn. It was as though the transition from winter to spring was condensed into one fast- forward week. Never mind that much of spring's greening had already taken place before this week, and never mind that grasses are not nearly as insulted by a late spring snowfall as people are.

It was a time for my annual springtime contemplation as I sat in the airplane, marveling at the world below. Each year, after the snow melts and the ground firms up, small patches of the scenery below turn a deep brown. As spring marches on, and grassy fields start to green, more and more fields turn dark brown under the farmer's plow. I watch as the fields are plowed, fitted, and planted through the days and weeks.

It is like magic; there was no fanfare, no public debate, and no great pontifications were made. All on their own, thousands of individual farmers made their best plans, and set about doing what they needed to, do as soon as they were able to do it. They make their best bets, roll their own dice, and hope that long hours will make everything pay off by autumn.

Every year this happens "all by itself'", and I find myself wondering how such an enterprise could take place within an authoritarian "centrally- planned" economy. How could the labor, machinery, and materials possibly be allocated and marshaled to the right places at the right time, when so much needs to be done so quickly? History has shown the answer time and again; the words "enterprise" and "authoritarian" cannot be used successfully in the same sentence.

Pilots sometimes make sweeping and simplistic generalizations about the land below, because so much of it can be seen in just one glance. Waves breaking on a beach may cast a glitter beneath us, and a tiny flick of the eye may change the view to a mountain panorama. It seems that we see everything, but at the same time we see nothing, because we see no people.

The land has an invisible overlay created by the interactions of people. All of us are bound to each other in a web of relationships, things that bring us the smallest of personal satisfactions to things that are imperative for our survival. Just as people work to achieve common needs they also find themselves working against each other when common needs are in conflict. Just as the view from an airplane excludes people, a spreadsheet laid in front of an analyst or planner also excludes the human elements.

Each spring for many years I have looked out from my airplane and watched farmers rework the landscape, but that is only part of the story. All year long, less visible because it takes place indoors, people work at various businesses, creating products and services which have value within the marketplace. Who would presume to fix the value upon this work, to assess it in terms of its validity or against a perception of its necessity? What sort of public agency could effectively manage the flow of all this invention, enterprise and commerce?

You don't need to fly an airplane to see the view, just climb a high hill and look about you. Think of how difficult it has been to steer the lives of your own children, and then contemplate how impossible it would be for some enlightened authority to watch out for all the people within your sight. Multiply this challenge by a million rural hilltops and then gaze across the LA basin or from a New York skyscraper.

Many times I have worried that the country is "going to hell in a handbasket". Maybe I still worry about the future, but today's fact is that our economic system, for all its imperfections, is far better than anything else that has ever existed. The common good of prosperity is most likely to be achieved when every worker is charged with the responsibility of doing the best for themselves, individually.

At the beginning of the week, low clouds tried to conceal the snow that fell overnight. Skaneateles Lake is in the background, to the southwest. 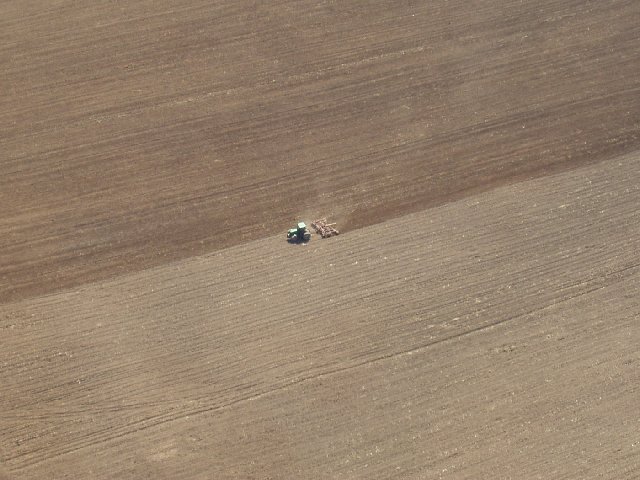 By the end of the week, one field is being disked... 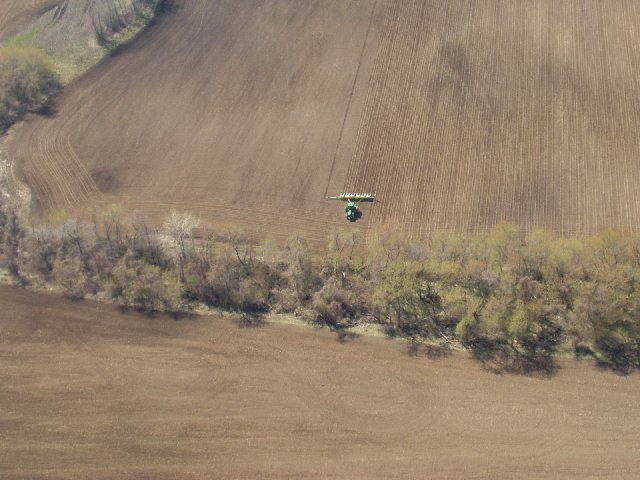 ... while another is planted.