One lunchtime several summers ago... once upon a time when it didn't rain every day... the conversation momentarily lapsed. Almost on cue, one of the more dedicated pilots spoke up, stating that he was certain that if it wasn't for his little airplane, he would starve to death. Most of the guys at the table recognized this as an exaggeration, but everyone else pondered for a moment. On a good week, more than a third of their meals were coming at the end of an airplane ride.

Most of the fly- around gang is retired, and they gather quite regularly, just like so many other groups gather over coffee everywhere else. The threads of several conversations can run concurrently, and carry on for a week or more. Talk of the weather has a bit more significance to these guys, and there is always some aspect of the day's flying to talk about. Over all though, coffee conversation is pretty much the same wherever you go, and however you get there.

Any talk of a new place to fly for breakfast or lunch is always more important than any other topic. To hear the guys talk, you would think that they were refugees, street urchins or post- Armageddon survivors; conversations regarding new places to find food carry a nervous sense of urgency.

Most of these old crows have been flying around this area for decades, and of course they know all the places that are available. It is always reassuring however, to know that farther afield a good meal can be had in Cooperstown or that the restaurant at Wyoming Valley has reopened. I found it amusing that this summer, while we've all been scanning the distant horizon for signs of a friendly camp fire, good pickins' have appeared right in our back yard.

On a ridge northeast of Prattsburg, truly in the middle of nowhere, the Speckled Hen Restaurant has opened for business ... just around the corner from a private airstrip that had recently become available to us. Such a happy coincidence is about as rare an event as the conjunction that guided the Wise Men to Jerusalem. Larry was the first to find out about it, and he had to pinch himself to make sure he wasn't dreaming.

A week ago Sunday I had a wonderful morning, starting with a breakfast at Middlesex. I flew to Weedsport for a mid- morning coffee and then flew to Prattsburg for dessert. I had stayed far too long at my first two stops, and despite an ambitious start on the day, I was running late. I worried that I wouldn't arrive in time to have the slice of pie that I was promising myself.

In calm air under a blue sky, the plane swished into the grass at Prattsburg and almost in one motion I parked the plane and started hiking down the road. I walked through the door a minute before closing time and asked if I could get a slice of pie to go. The waitress replied that I could have whatever I wanted, any way I wanted. I hate to inconvenience people, but the greeting was so friendly that I sat down and selected the red raspberry pie from their list of choices. I accepted their offer to warm it up, and I accepted the offer of whipped cream on top. When I was asked about a beverage I replied that a large glass of milk would be good.

I watched the staff as they subtly made the shift from serving meals to cleaning up, and I looked around this new restaurant. It is a freshly restored farm house which probably should have been razed instead of repaired. I am told that just two years ago, a visitor entering the front door would have looked right down into the cellar. Today it is as "cute as a bug", inside and out.

Sunday was a long awaited fantasy day for me. I always talk of "wasting half the day in the airplane" and on this day, that is exactly what I did. I traveled around and found a slice of heaven just down the road from a quiet country airport. 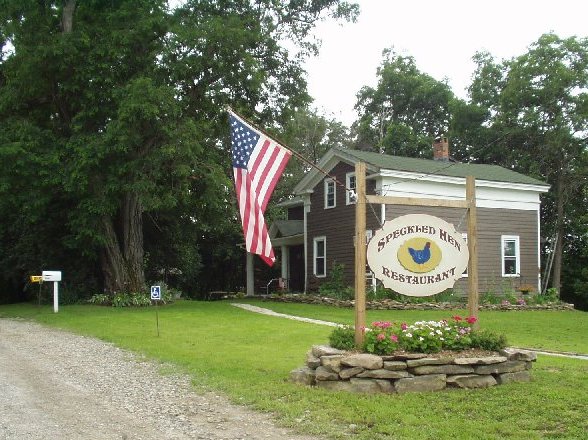 Two pictures of the Speckled Hen Restaurant. For those readers in the local area, directions and hours can be obtained by calling 607 522 7877. 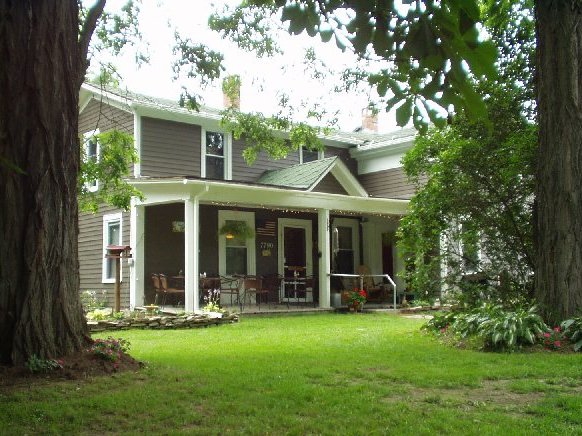