I remember the hot spell we had last August. It had been several years since we had seen a spell of 'hundred degree days. People complained, and I suffered right along with them, but I comforted myself that the weather would soon would change.

For the next month, cold fronts came in from the northwest once or twice a week, each one in turn bringing down our temperatures. In January we would have called them Alberta Clippers, but in August we called them relief. I knew that would change too, and I knew that soon enough I would climb up into a cloud and watch as ice formed on the wings. Winter will come and we will be dumbstruck at the thought of hundred degree days.

Other things have changed too. My nightly duties now carry me to Syracuse instead of Newark. It's easier trip, but not my choice. The flight to Newark is longer, busier, much darker, and the overnight accommodation are crude, but I always felt rewarded by it. Nowadays my return flight to Elmira is in daylight and I can usually enjoy the views of clouds and landscapes, but the trip seems almost like a sprint.

My airplane has also changed homes in the last month. I have called Dundee my "home" airport for most of the last 14 years, but it is a 25 minute drive from where I live. Lots of folks would be happy to live so close to their airport (or marina, or golf course, or...), but it has always bugged me to drive north for half an hour so that I could get into the plane and fly south for an hour. Other people wouldn't be bothered by having to pass through Watkins Glen en route, but its summer logjam reminds me too much of the outside world.

Its not like I am going to be a stranger to these parts, but the plane now lives at an "interesting" hilltop airport above Beaver Dams, less than ten minutes from home. I first landed there in 1988 before any buildings had been erected, and it felt as though my short flight had taken me back a century. The airstrip sits atop some of our area's highest ground, and is far from main roads. The view of the hills and blue sky seemed as timeless as the wind itself.

Things changed on September 11th too, perhaps announcing the start of the next century. Things will certainly be different, but we needn't rush into change without a measure of forethought. Our safety is a concern, but we must remember that liberties which are surrendered in the in the swirl of a storm are not redeemable when the weather clears.

On reflection, it may be argued that airport security did not fail. The hijackers obviously considered that their plot would too likely be foiled by existing security systems, but realized that the psychology of hijacking required minimal force for success. They reasoned that they would be among people who had rendered themselves free of weapons, were risk- averse, and who regarded their safety to be a concern of the "experts".

The psychology of hijacking changed later that day, when the passengers on the Pennsylvania plane became aware of their fate and counterattacked. There is no doubt that they saved a national landmark and the lives of hundreds more people. Their actions also showed any future hijackers that real weapons will be required for success. Theoretically, no change is required of the old system of airport security.

The core of the "airport security" issue should be more accurately stated as "aircraft security". The central element is a knowledge of the people and things that are loaded in our airliners, and also control of the people who come in regular contact with the airplanes. Several excellent proposals have been offered. Airports have many businesses though, and most of them are unrelated to the flow of passengers and airliners in and out of the airport. Even though they are located far away from the airline activities, they are hobbled by unwieldy restrictions which look good on paper but have little basis in reality. A measure of common sense is needed.

Some things never change. There is always somebody who wants to control your mind, and to make you steer yourself in their direction. We can gradually surrender our liberties, incrementally accepting a totalitarian government, only to find that terrorism can only end when the government itself rules by terror.

We are a nation descended from rogues and risk takers, people who had the confidence to uproot themselves and seek better. They were people with the self confidence and independent spirit to assess a risk and accept the consequences. Let's not change the destiny that our forebears hoped for us. 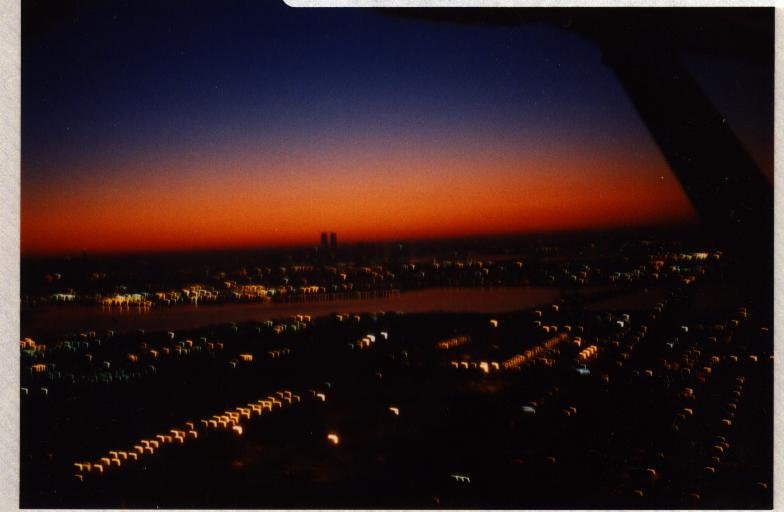 On my trips to and from Newark, I regarded the twin towers as a companion. One evening as I was arriving straight in for runway 11, I watched a fireworks show in the New York harbor, and saw the colored bursts reflected in the glass facades of the towers beyond the harbor. It was a spectacular sight. My usual view of the towers was in the early morning as I departed; they were the first part of the skyline I would see. This photograph was taken one summer morning at first light, just as I lifted off.
Plane Talk Archives
Return to Home Page
E- mail Bob Tilden at rdtilden@yahoo.com