bobtilden.com
TOO PRETTY FOR A PICTURE
October 6, 2004

Saturday the second of October had sat with an evil malevolence on my calendar for months. As the time grew nearer, the cloud grew larger and darker. It was the time for our semi-annual recurrent training session, the day when all the pilots of the western realm of the empire are gathered together in central Pennsylvania. It is never as bad as it seems it will be, and it is good to see everyone again. Still, I am sure that all of us would rather have been home.

The forecast for the day was as gray as my sentiments were, and on purpose I left my camera at home. I couldn't imagine a chance for a good picture on a day when the weather and I both seemed so uninspired. I did this even though several other pilot meeting flights had passed through memorable cloudscapes.

The outbound flight was unimpressive; there were a few views of white clouds piled in the distance, but mostly it was gray. One of the other Elmira pilots was riding with me, and we were both grateful that we beat the rush which inevitably occurs when a dozen planes try to arrive at once. It was an easy and uneventful trip, and it foretold a meeting which was much like a visit with a good dentist... We didn't want to be there, but after it was done we could say that it wasn't so bad after all.

While we sat inside all day, a sharply defined cold front passed overhead and had just cleared Elmira by the time we were ready to return. Folks here at home had seen a dull day which developed a period of rain and then cleared at sunset. A magical coincidence of timing, where the setting sun would break through a narrow gap between retreating clouds and the western horizon, was about to occur.

We had no idea that the sun and clouds were moving into this rare conjunction. All we saw as we flew home was the insides of bumpy gray clouds and rain which occasionally splattered against the windshield. Like so many of the flights we make, we sat dumb in the front seats knowing that the present weather and the destination weather were no particular challenge. With folded hands we listened, watched and planned.

As we descended into Elmira, the world of gray outside the airplane changed to a brilliant orange. There was nothing to see in the windows but an orange glow which seemed to come from every direction. As soon as we had the chance to exchange wide- eyed "WOW"s about the sight, and to take a second look, we started breaking through the bottom of the cloud deck. Through wisps and lumps of orange mist, the forested hills southwest of Elmira started to reveal themselves in surreal splendor.

Many of the trees were in their fall colors, and the orange light of the setting sun absolutely turned them ablaze, highlighting the shades of autumn while darkening the leaves which were still green. The light of the sun raked horizontally across the land below, setting every ridge in stark contour with every hollow. Thousands of people on the ground were marveling at this beautiful sunset, but we were the only two people to be admiring it from inside looking out.

passing cold front. We looked all around for a hundred miles at patches and lines of firey clouds, sitting motionless in a darkening blue sky. To the east there was a short splash of rainbow, but with only red- end colors to refract, it held an other- worldly shimmer. The whole scene could well have been painted by a "science- fiction" artist.

As the sun set a bit further, the world below fell into shadow, yet we were still in a sky painted in yellow, orange, and red. A few shards of the defeated weather still straggled in clumps and lines below our altitude, and as they too fell into the shadow of the distant horizon, they faded into a gray that almost seemed purple. They hung like ornaments between the darkening earth and a sky which remained irrepressible.

I was conscious of what the other pilot was saying, but his words were drowned out by my own words. For a few minutes we were like a pair of wide- eyed boys who were just making some great "discovery". In our job, as the seasons change and the years pass along, we fly through many sunrises and sunsets, and appreciate each one of them. Neither of us though, in a combined twenty five years of instrument flying, had seen such a spectacular sky as we watched for those few minutes.

The next plot meeting is in April, and I will bring my camera, no matter how much I would like it... and me... to stay home. Even if I had a camera last Saturday though, I couldn't have brought home a picture that would have done justice to this experience. A four- by-six inch photograph cannot hope to capture the drama contained in fifty thousand cubic miles of sunset.

In retrospect, it is fortunate I didn't have the camera; a picture would only have dulled my memory of the experience. For the rest of my years, I will be able to look at photographs of great sunsets and say to myself "That's where I was, right there in the middle of it... and yes, it was as spectacular as you can imagine".

I don't think that it is unusual that the three best sunset pictures in my collection are taken from the ground. From an airplane, the "show" is spread out over too wide an area up, down, right, and left to capture with a single picture. On the ground,the viewer stands back far enough to see everything at once, although a bit less personally. 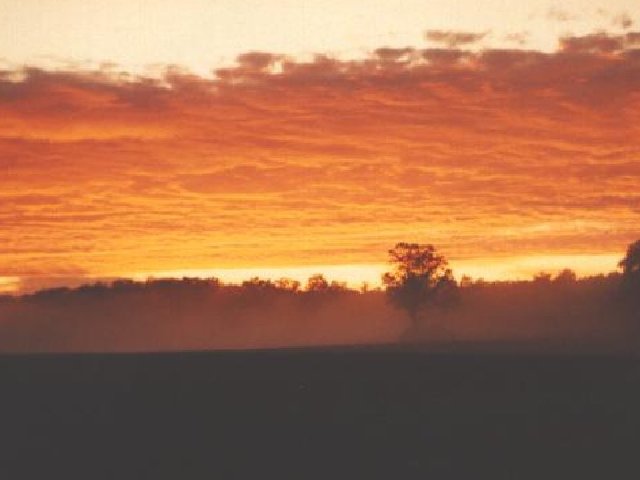 Early '90s, just up the hill west of Watkins Glen, maybe the best picture I have. This scene is close to what my friend and I saw, because the clouds are fairly low, and a cold front had just passed through the area; note the mists from the recent rainfall. Usually the prettiest sunsets are made of high clouds, where the sun has plenty of room to get "underneath" them.

"Our" sky was much more complex than the one in this picture, but we descended through clouds that looked just like these. 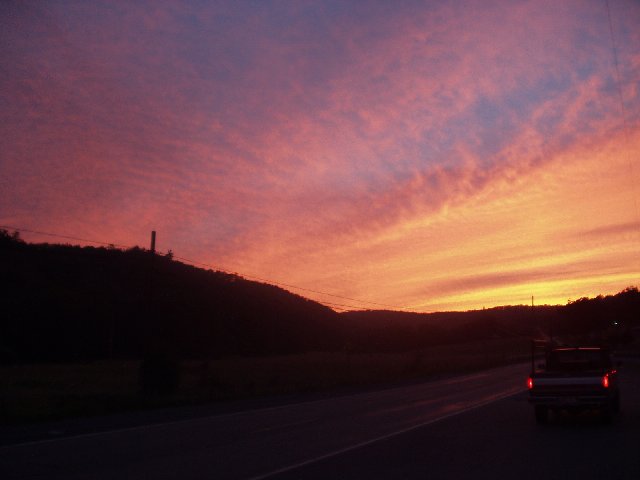 Someplace in West Virginia, late August of 2003. These are higher clouds than those shown in the first picture. 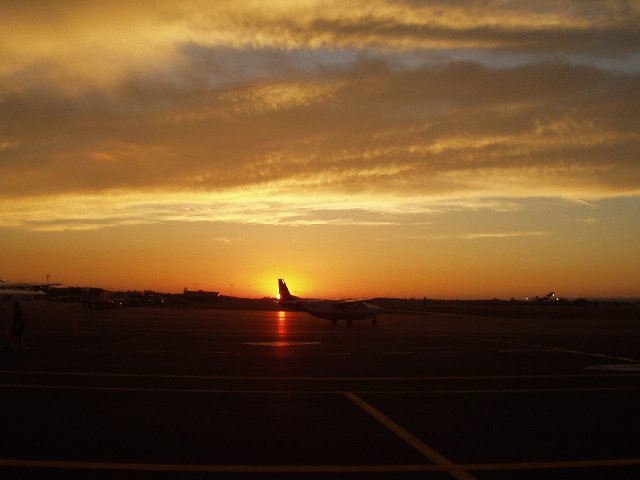 The tail of a departing Caravan blocks the sun on this morning in Syracuse. I suspect that sunsets are prettier than sunrises, but this one has plenty of color too.
Plane Talk Archives
Return to Home Page
E- mail Bob Tilden at rdtilden@yahoo.com