I sat comfortably in a world of darkness beneath the canopy of a billion stars. My arms were folded in front of me and I smiled because on this night I didn't have to take a "trend". I was celebrating a victory that was entirely ceremony and devoid of substance, but I'm not picky when it comes to things like this.

Taking a "trend" refers to the engine trend monitoring program which most operators use to extend the overhaul intervals of their expensive turbine engines. In essence, if a record of a half-dozen critical engine health parameters is faithfully kept, and the numbers stay good, the engine can remain in service far beyond the manufacturer's normal limit.

On this evening last week, I had climbed through a layer of icy clouds and had to engage the deflector vanes that prevent the engine's air intake from icing. The vanes put a sharp bend into the path of the engine's inlet duct; moisture droplets are too heavy to turn sharp enough, and continue straight back and out through a vent. This disrupts the engine's breathing efficiency however, making any "trend" numbers statistically worthless.

Thus I celebrated my statistically worthless victory, avoiding a few minutes of distraction on the first of many icy nights to come in the next six months. There was more winter to the night than the ice though, and many other things said "winter" to those who cared to notice. The clouds that I had climbed through were our familiar winter residents, the lake-effect layer that is usually a couple thousand feet thick beneath a sky that is otherwise crystal clear.

As I passed through the top of the cloud deck, I dimmed the panel lights and looked around. Most everything was just the way that I left it early last April, the clouds absolutely black below me and the billion stars of a moonless night above me. Somewhere there was a flat and level horizon line out there where the black sky met the black clouds, but it could only be deduced, not seen.

Once I leveled the airplane two thousand feet above the cloud tops, I could see that the lights of Buffalo were cast high into the sky, indicating that there was no cloud cover there. The lights of Rochester, much closer, showed up later because the tattered edge of the cloud deck was right over the city. These clouds were formed by Great Lakes moisture only after it was forced uphill by the rising elevations to the south.

Quite often the lights of cities and large villages shine up through our winter cloud deck, making small islands of brightness upon a dark ocean below. The light is diffuse enough that it seems to be more like a fancy ballroom, where lights are cast through translucent slabs of stone on the dance floor. Penn Yan and Canandaigua were bright enough to cast their glow through the clouds, but the undercast remained dark over the smaller towns.

I could see that I wasn't alone. On such a dark night with hundred-mile visibility in fresh winter air, airplanes departing Buffalo, Rochester and Syracuse were visible at unusually great distances. Seemingly the world was empty except for us guys flyin around on a beautiful night, and the thought of such an uncomplicated world seemed inviting.

A look farther up, at the stars, showed that there were things that were not exactly as I had left them last spring. Orion is my springtime favorite, the three stars of his belt standing almost vertically in the twilight of the western sky, well after the days have become long. Orion was nowhere to be seen on this night, but instead there was the Big Dipper, sitting level in the northern sky as it does every autumn evening. It is the main feature in a sky that darkens early over a land that still holds the warmth of summer.

There were other hints too, the Pleiades was on the eastern horizon, and the Milky Way stretched across the sky mostly perpendicular to my course, visible all across the sky if I leaned forward and looked out the top of the sloping windshield.

I will admire the stars making their silent but inexorable march through the sky on many crisp and clear nights this winter, but there will be many other times when just walking from the house to the car will seem like an arctic expedition. Hollow victories are better than none at all, and I intend to cherish every one of them until the oak trees turn green again. 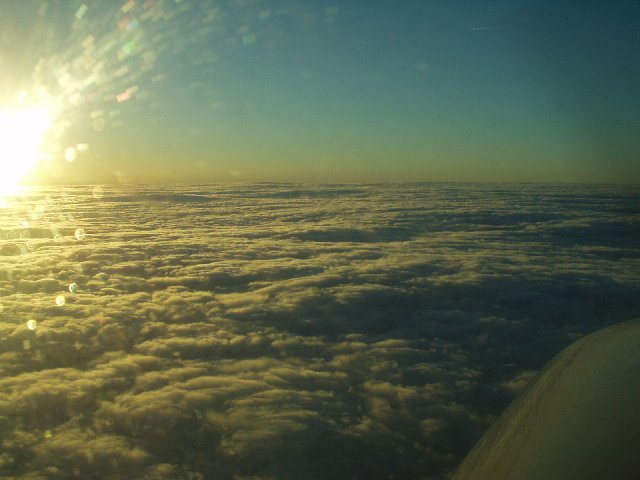 Looking the left of the nose at sunrise, returning from Rochester in mid December 2004. This is a daytime picture of the weather I described above; the sky is a bright blue, with visibility that stretches for a hundred miles. Below me is several thousand feet of clouds which would block out most, if not all, of the lights on the surface. With no moon at all, this makes a very dark (but not unfriendly) night sky!
Plane Talk Archives
Return to Home Page
E- mail Bob Tilden at rdtilden@yahoo.com