A few nights ago, I came to one of those idle moments of contemplation that could suggest either rapt fascination or boredom. I pondered the word "hurtle", and could not think of a situation where I have heard it used with a positive connotation. The best that I could conjure was a somewhat neutral situation where celestial bodies hurtle through space; they go fast, but no imminent hazard is implied.

When two things hurtle, they are usually hurtling towards each other. When one thing hurtles, it is usually towards doom. Things hurtle to a firey death, but never it seems, to paradise. It just didn't seem right, because "hurtling" was the only word that could describe the scene out my window.

It was really quite a relaxing flight. Weather during the load and departure was no worse than dull, and the arrival weather was much the same. In each case, some snow was falling and there was a bit of a breeze. In between there was a band of lake effect snow, and aloft, the snow was quite heavy.

Cars are no fun to operate in the snow. Traction is poor and there is peril at either edge of the pavement. A parade of oncoming vehicles, any of which may or may not be under control, appear ahead and pass by. Visibility, the ability to see all these imminent hazards, is also poor. The windshield defroster, put to the test by the moist air outside and the melting snow on your boots and jacket, doesn't work well. Clogged windshield wipers only add to the misery.

Snow presents no such hazards to airplanes in flight, where traction and visibility are both irrelevant amidst miles of thin and empty air. Wing ice, the great bugaboo of winter flying, is almost guaranteed not to occur when flying in snow. Taxiing, takeoff, and landing can be a challenge, but in flight the overall sensation can be quite serene. Several times before, I have mentioned the sensations of "floating along in my little bubble of warmth and light".

So it came that I was sitting there amidst the blizzard, "with the taxes paid and the woodshed full", so to speak. All of my paperwork was done and everything was set up for the landing approach. I started to watch the snow outside, and turned on the landing lights to maximize the eerie effect.

Snowflakes passing at 170 MPH appeared only as streaks against the darkness. Some struck the wing, but mostly they made a wave above and below it as they rode the air around it. The sight of the snow against the landing light cover on the leading edge of the wing showed this the best. The flashes of the strobe lights would capture a motionless galaxy of snowflakes beyond the wingtips, creating a stark contrast to the dizzying streaks rushing towards the landing lights.

As I looked beyond the dimly lit instrument panel, into the onrushing snow, I could only feel that I was "hurtling". In some respects, it was like the classic nightmare of falling down a bottomless hole in the earth, but all I was doing was making my way to Syracuse. It was an interesting contrast between the exotic and the routine, just as the landing lights and the strobe lights gave such different views of the same snow.

I have yet been unable to conjure a word that conveys the rushing sensation of "hurtling" without the connotation of imminent demise. Perhaps it is our ethic, an underlying sentiment that good things come only with pace and deliberation, and that anything that happens quickly, whether good or bad, always turns out bad. Even if it was confetti that I was hurtling through, it would be expected that such abrupt fame would lead to disaster.

It may be that part of aviation's lure is the indescribable, the things that are seen and felt, but do not fit any traditional definitions. 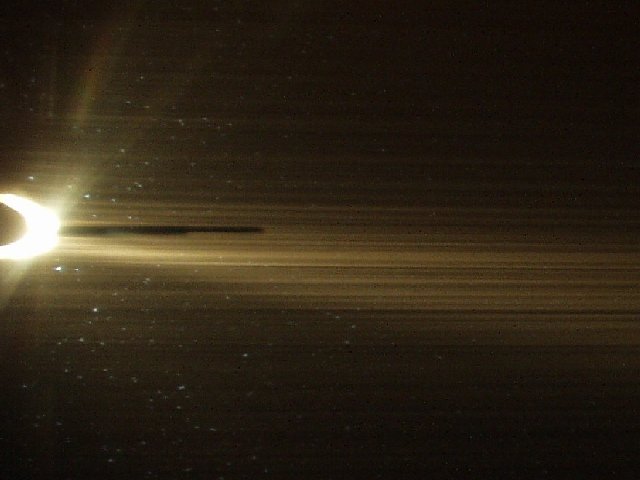 This picture is about as good a photograph of "hurtling" as a simple camera such as mine will ever capture. The snow is rushing towards the "headlight" of the plane out on the wing. Behind the lines of rushing snow are individual snowflakes, frozen in the darkness by the strobe lights on the wingtip.

Incredibly, this picture was taken at 9000 feet over Schuyler County, an hour short of July 2004. The temperature was below freezing, and it was snowing just as heavily as I would expect in the middle of winter.