My wife sat at the table looking through the latest batch of pictures that I had taken. It was the usual mix of photos from "Bob's World", Some pictures of shop projects, some pictures taken from my Commonwealth, and some taken from the company's Caravan. She commented on each one as she worked her way through the pack, but abruptly she stopped and asked " why did you take this one?"

The picture was of almost nothing, just a gray straight- ahead view of the Caravan flying through seventy miles of cloud. A second look reveals a few subtleties, such as the a bit of ice crusted upon the windshield, and a little green annunciator light which notes that the windshield heat is on. I told her that it was a picture taken at work. She replied that my usual work pictures, with puffy clouds and red sunsets, were much prettier.

The pretty pictures were taken during the times that I was being paid to maintain a physical presence in or near the airplane, but the several dull gray pictures were taken during one of the few flights when I had to work. Other pictures taken on that trip showed as much as a quarter inch of ice on the airplane, and one picture even showed that the deice boots on the wings sometimes work exactly as advertised.

On this particular trip, my usual altitude of 6000 feet was icy enough that I had to try someplace different. I was considering a descent to 4000 feet where I suspected the temperature was above freezing, but another plane reported clear sky at 7000 feet. I had the luxury of two choices, and I climbed into a blue sky that covered a world of white that went from horizon to horizon.

Statistically, the odds are that "things will work out". It always has, but we all know of people who have suffered very ungraceful escapes from the ice, and some people who weren't even that lucky. Strangely enough we are usually anxious to "get going" in this weather, because on the ground we have only guesses about what we may face. Once in the air, the speculation ends and the business begins; the list of possible problems is whittled down, and the fix is usually apparent.

Last Saturday morning, the air was cold and raw, with low ceilings and light rain mixed with a few snowflakes that fell with a thud. I anticipated a difficult flight down to Elmira, but was delighted to find that the temperature at 4000 feet was mostly above freezing. I watched the digital temperature gauge as it meandered in a range of a degree above and a degree below freezing. The air was all mixed up, both horizontally and vertically, as other pilots were reporting that there was a layer of freezing air above my altitude, and then another warm layer above that.

Mixed- up air brings all sorts of problems, especially when the warmer air is above freezing and the colder air is below freezing. I was very happy to coast along in warm air below it all. In fact, I felt as though I was coasting all weekend as the weather went from bad to worse, and I played happily on the ground.

It may well be that the only person who can enjoy the mix of rain, ice, snow, and mud that we had last weekend is a pilot who is not scheduled to fly. I had a couple of projects down in my workshop, and a pile of poplar that needed burning. Each morning I slogged through the mud , lit the stove and kept it stoked with the ugly logs that are unfit to burn anyplace else.

The shop was warm, cozy, and of course dry. I alternated between a welding job, making a snowplow mount for my truck, and a woodworking job, making a butternut table for the cabin. They were two very different jobs, but I had the same "cat- ate- the- canary" feeling of giddy contentment every time I looked outside. 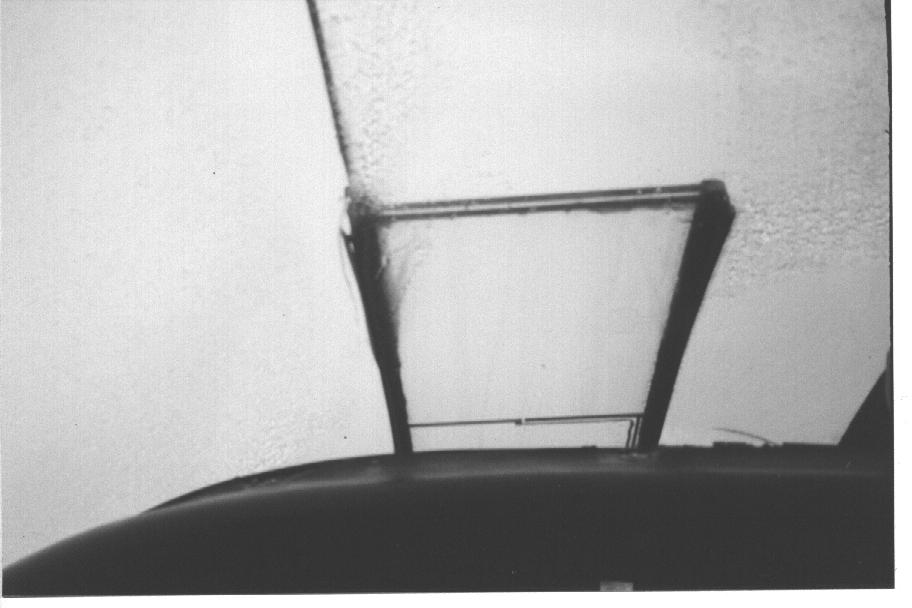 This is the picture that I took "while flying in 70 miles of winter cloud". The rectangular device on the windshield is the "hot plate", a plate of electrically heated glass which is mounted just ahead of the plastic windshield. When ice formation is especially bad, the only view forward is through the upper two- thirds of the plate, and the area around it becomes crusted with frozen runoff from the heated area.

When cruising in clouds, there certainly isn't much to look at. If there is no ice or thunderstorms to hold your attention, there isn't much to do but read comic books.