I could offer a dozen reasons for Plane Talk's five- month absence, because there are at least that many. Plane Talk is mostly an evening project, but summer nights are so short and the days so busy. Writing was set aside partly because I was busy, but partly too because it seemed trite; While we all ride in a handbasket sliding to hell, I babble about the pretty clouds.

My wife and I like to recall the winters years ago, when the kids were still little and there wasn't much money. I had a part- time job, cut wood in the winter, and farmed in the summer. We spent a lot of time together and had a lot of fun. With a bit of wistfulness and some exaggeration, we like to recall the winters that we lived on cow corn, pumpkins, and powdered milk. Every day was a victory, and victories are always sweet.

We didn't spend time worrying about things like Kobe Bryant or Laci Peterson because we didn't have a TV to drop visual images of far- off and far- out problems into the middle of our living room. Our home was warm and dry, and the pot of corn mush on the stove completed our sense of contentment. People have no little victories to savor, and no sense of thankfulness, when they lust for toys and trivialities. Life becomes pallid when people can hold "someone else" responsible for the consequences of their own poor judgement or inattention.

Recently I read an article about the Neanderthals, the last of our hominid "cousins" to become extinct. The article credited them with more intelligence and skills than otherwise believed, and also noted that their skeletons bore injuries that suggested that "they hunted down large game at close range, with hand weapons" Shall I suggest that second hand cigarette smoke was not high in the Neanderthal's list of workplace worries?

I say that we have it easy. We don't have to go out with our neighbors each week and hunt down wooly mammoths with stone knives, and we don't even need to duck bullets or step around land mines. We all live on easy street; some sleep on the sidewalks and some party all night in penthouses, but compared to other places and times, we have it good.

We have had it so good for so long that we have let the fires grow cold within the engines that brought us here. We have lapsed into a culture of indulgence, placing matters of style far above considerations of substance. Like all those who have come before us, we worry... but we have lost focus and perspective. We worry about all the wrong things.

Flying, whether I am in my own airplane or at work, takes me away from all that. When I leave the ground I enter an old- fashioned sort of world where bad decisions have bad consequences, and bad luck can force me to call up my every reserve of skill and guile. This responsibility is balanced by the stunning freedom to see the world from a perch among the clouds. From a few thousand feet you can see everything, but you can hear none of the silliness that seems to have captivated so many of the people below.

Flying keeps me focused. Most of the time it is all fun and games, but at a deeper level there is always a vigilance for rude surprises. I make a point of enjoying every flight, or at least acknowledging a thanks for every safe arrival. Each flight is a sweet little victory. 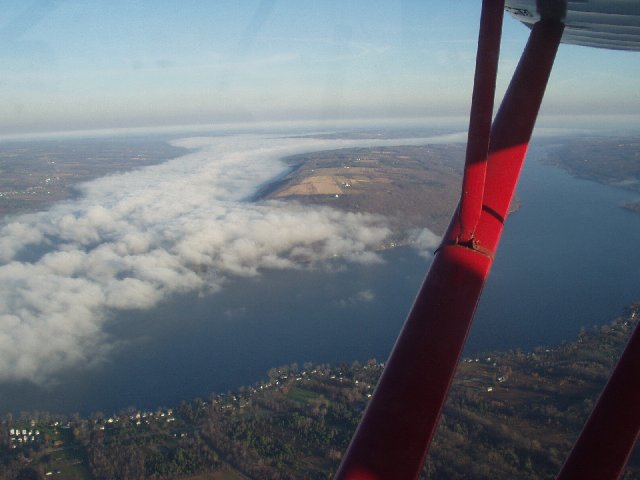 This picture has little to do with this column, but indirectly it says everything. It shows most of Keuka Lake, looking north on an early morning in November 2003; the west fork is hidden beneath a whimsical layer of fog. I will reinterate what I said a few paragraphs ago... "From a few thousand feet you can see everything, but you can hear none of the silliness that seems to have captivated so many of the people below". There is only the timelessness of the lakes, the hills, and the sky.