The land that rolls along beneath the airplane is a pattern of patterns. Ridges and hills fit hand- in- glove with the creeks and rivers. Man made his first "permanent" marks in this area with survey lines that were dictated by compass direction rather than terrain. Settlers followed, and the land was opened for cultivation in fields that tended to parallel the survey lines, or when necessary, the terrain. Roads between settlements followed the flow of the land, but local roads from town to farm generally orient with the old surveys.

Railroads followed, with the mandate to join the country together and with the imperative of avoiding steep grades. The pathways of their long- gone rails are still visible, meandering across the lay of the land as they balanced the often conflicting factors of shortest distance, shallow grades, and minimum excavation. Today the interstate highways follow many of the old rail routes, but will often hop over a hill that the railroads would avoid.

On an individual and more contemporary level, I have seen crude "crop circles", some mazes cut into corn fields, and some imaginative cultivation patterns. Recently though, I was unprepared to see fifty foot letters, F-L-Y , mowed into a small field. Accompanying the letters was a miniature airfield, with a runway, a parallel taxiway, and four short taxiways connecting the two. I was on my way to Rosie's midweek lunch for antique pilots, and even though I was running late, I paused to circle the sight one time.

My curiosity was piqued, and I received no satisfaction when I asked the others about the letters. Nobody had seen it, or knew who might have done it. Since it underlies my usual path to Weedsport, I saw it several more times, and was surprised to suddenly realize that there seemed to be a genuine runway adjacent to the artwork.

Runways, even grass strips in farm country, are often distinguished by a break in the pattern of the surrounding land. A hedgerow will be penetrated for no apparent reason, a notch will be cut into a woodlot at one end, or the land will be graded into a long and narrow shape. This runway, if it was one, was no more than an unusually wide farm lane separating two fields. It was disguised by being so normal looking.

Since the area was obviously populated by friendly natives, I considered landing, but caution got the better of me; I have learned that a landing area can please the eye more readily than it can please the airplane's undercarriage. During the next week I was able to determine that the inviting strip of grass was meant to be a runway, and I decided that I would land there the next time I passed by.

Last Wednesday was not an ideal day for dropping into small private airstrips, but winter's snow and mud is coming, and things will only worsen. Northbound, passing Aurora off my left wing, I started looking for the field ahead. As I said, the strip is camouflaged, and the letters can be missed if viewed from a bad angle. Suddenly I saw it just out my left window and I cut the power to glide around and land.

On the approach, I couldn't help but feel that the runway just ahead was "comfortable" Wide enough, long enough, flat, and smooth. The touchdown and roll- out were as pleasant as the runway had looked, and I taxied back towards the barns. I turned at the end of the landing strip, followed along the end of a plowed field, over a culvert, and into a grassy yard.

As I shut down the engine I saw a man approaching at a half run. I was relieved that he didn't have a buzzard gun, and greeted him by explaining that the letters said "fly" not "land" but that I had taken them as an invitation to drop in and see. The man, a fellow named Bob, was just tickled to see any airplane on his runway, even if it wasn't his own. He asked if I had any trouble taxiing in as far as I had, and I replied that there was no difficulty. He replied "good", and said that he wanted to put his hangar where I was parked.

It turns out that he is a pilot, but does not own an airplane. He laid out the landing strip as a first step in acquiring a plane, and mowed the letters in the field as a joke between him and another local pilot. I wish him luck in his quest; new faces are always welcome around the breakfast tables... and the woods at the far end of his strip sure looks like a great "middle of nowhere" fly- in picnic spot. 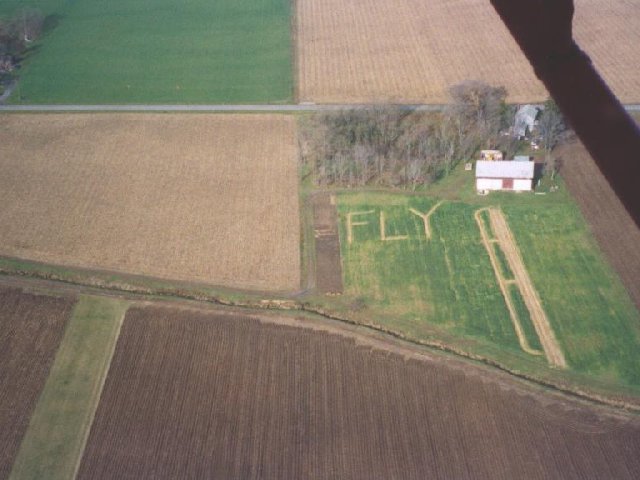 The yardwork which caught my attention. The north end of the real runway is at the lower left. 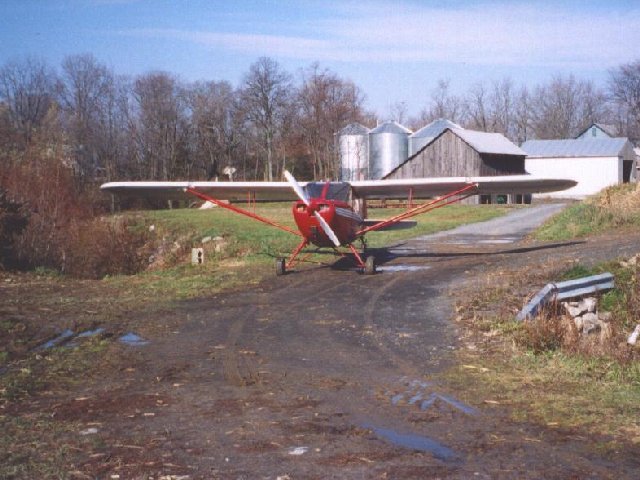 After turning left at the north end of the runway, I taxied along the end of the field, into the farm yard, and turned around.