Gibberish at first, but if you sound out the words in the title, they become the immortal words of Sylvester the Cat; I- thought- I -saw- a- puddy- tat. What though, does this have to do with aviation?

The seemingly blue sky above us is carved into all sorts of different classifications and designations. There is class A through G airspace, various restricted areas, airways both high and low, approach paths, intersections, and more. The sky is a spider web of navigation signals, radar beams, and communication chatter. Sometimes I wonder how the sun ever pokes its way through.

The four strange words of the title are the names of intersections, and every intersection is identified by a five letter name. It is a big country, with a growing need for these identifiable points in the sky. Even though the english language is formed from quite an impressive array of sounds, there is only a finite number of five letter groups that are pronounceable. Those four particular intersections are waypoints on the landing approach for Portsmouth, New Hampshire.

Some intersections have sensible names. BIZON is near Buffalo. LYSAN is above the town of Lysander, near Syracuse, and SCIPO is near the town of Scipio. THINK intersection is near the birthplace of IBM's founder, Thomas Watson. Our governor was honored with PTAKI intersection within the past few years, but the proposed name TXCUT was never applied to a new intersection near Albany.

Sensible, humorous, or even pronounceable names are becoming scarce though. Some other local intersections are AGFUB, XUCCO, NUFXO, WOFIL and UMAGY. Fortunately, most of these outlandish names are connected with the specific procedures used to make instrument landing approaches; Pilots have a detail map of the approach which clearly shows all the intersections. Spelling and pronunciation are not critical, since it is unlikely that a pilot could mistake XUCCO for NUFXO.

A creative hand also comes into play with the formal designations for aircraft call signs. These are coordinated by an international agency, and no two companies in the whole world can have the same one. Even the untrained ear can recognize USAIR, AMERICAN, UNITED, or SWISSAIR when they talk with the controllers, because their name is their call sign. I don't know why National Airline flights are addressed as REDROCK, but I do know that the ill- fated ValueJet airline flights were addressed as CRITTER because of the peculiar logo displayed on their tails.

The more colorful names seem to be applied to cargo airlines, sometimes called "freight dogs". A look through the registry shows several references to boxes, vans, and dawgs, but a freight line in Hawaii is assigned the standout call sign of UGLY VAN. I will bet Dollars- to donuts that they operate a fleet of Shorts Skyvans, starkly utilitarian airplanes that look like they are built from Lego blocks.

For all its complexity, the air traffic control system becomes a small village as the night wears on. The same call signs are cleared along the same routes and through the same intersections at the same time every night. It is much like sitting quietly in the woods for a few hours a day; you learn the different birds and animals, and then learn the individuals within the different groups.

Like the woodland animals, we find comfort and reassurance in the normal noises around us. When bad weather lurks, we note the reactions of the others as we each formulate a plan to keep from harm's way. Despite all of the bureaucracy and technology that underlays commercial flying, there's room for a surprising amount of what would otherwise be called "animal instinct". Much can be learned just by watching and listening. 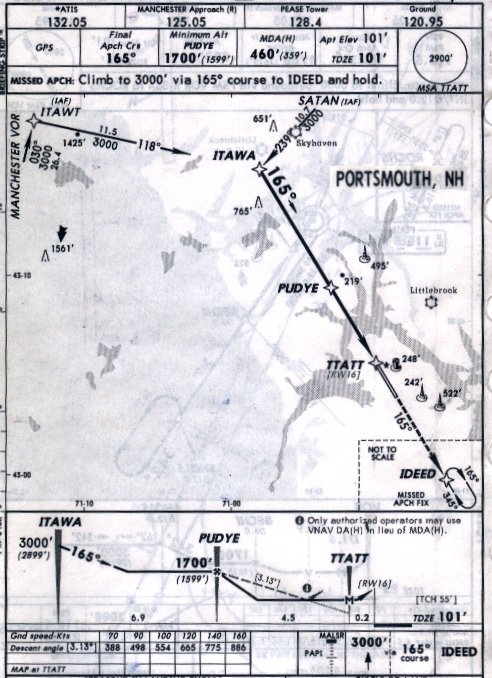 An excerpt of the approach plate for Pease International Tradeport, (the former Pease AFB) In Portsmouth NH. The upper diagram shows that the approach can commence from ITAWT or SATAN and then progress through ITAWA and PUDYE. The waypoint TTATT is the "missed approach point" located a quarter mile from the end of the runway. Unless otherwise instructed, planes that are unable to land at the end of the approach are expected to proceed to IDEED (I did see a puddy tat!) and hold. Pictured below the overhead view is the descent plan, showing the step downs at each waypoint. Incidentally, the GPS approach to the other end of this runway starts offshore, crosses the beach, and the missed approach hold is 12 miles farther inland... It is made up of SHOLS, BECHI, and ROCHS intersections..