bobtilden.com
SOMETHING OLD, SOMETHING NEW
December 19, 2001

My little red airplane is a Commonwealth Skyranger, built, like most of its brethren, on Long Island in 1946. In all, less than 400 were built, and probably 60 are still flying today. More than half of the owners are tied together by an internet mailing list which allows any of us to query all the others with technical questions and the wherabouts of spare parts. I received an e- mail recently which concluded with the apology that "I'm sorry be so windy, but it feels so good to be putting things back together... I had to crow to someone, and you guys were selected."

The message was written by a fellow named Paul who introduced himself to us last July with an email that announced that he had just "rescued a Commonwealth from a slow death in Pomona", and had brought it back to his place in Tacoma, Washington for restoration. He said that the plane had set idle for so long that it had been dropped from the FAA registry, and that it had deteriorated during its storage.

During the course of the summer and fall, Paul sent many messages to the group, asking about the landing gear, instrument panel, wing ribs, a source for windshields, brake parts, and other things as well. No doubt there were other messages between him and the various people that responded to his questions. His recent email marked the turning point in the project, where the piles of airplane parts were starting to be reassembled into an airplane again.

The left wing was the centerpiece of the restoration because it had suffered damage beyond mere neglect. I am under the impression that the only salvageable parts were the main spar and the various brackets, fittings and braces. Paul made new wooden wing ribs in a jig that he built, and made a new rear spar from a blank of certified Sitka Spruce. It is very much old technology, but very exacting in the specifications. A mistake made at the beginning might not show up until the final assembly, and weeks- or months- of work night have to be redone.

Paul's email announced that he had made a trial assembly of his left wing, and that everything had fit perfectly. He was happy and proud, and told how he had solved several problems. A number of holes had to be drilled in the new spar, and they had to be perpendicular and of the exact size. It can't be reliably done by hand, and the piece, outwardly resembling a sixteen foot 1x4, is too flimsy to place on a drill press. His solution was to block the spar in place on his big flat table and move a bench- mounted drill press to each hole. He also explained how he had set up guides for an electric hand planer to cut the bevel angles on the top and bottom edge of the spar.

I was very interested as I read the solutions to the problems he had faced, and it took me by surprise when he apologized for taking too much of our time. I re-read his message and thought back to the day that my plane followed me home from an auction. I did just a little bit of telephone work and found out that this Commonwealth group exists. After talking and corresponding with some of the guys, I realized that my plane had come complete with a whole bunch of new friends.

The Commonwealths are similar to the Pipers, Aeroncas, and other planes of the 40s, but each manufacturer did things just a bit differently. Among our group, there is always somebody with the experience to know just how some particular part was built, what can go wrong with it, and how to fix it. There is a complete set of manufacturer's plans available, and even a small stash of 55 year- old parts that are still brand new. Scattered among a few dozen hangars and workshops across the country is the answer to any question and the solution to any problem. It is reassuring.

When our airplanes were built, the concept of the PC- driven internet was not even imagined. Today though, our planes are examples of a fading technology; things were built differently then, and the builders are long gone. Computers, plastic boxes filled with magic, are the lifeline of contemporary information which allows today's owners and mechanics to keep old planes flying. Without the personal computer, more old airplanes would be dying "slow deaths in Pomona" because normal folks wouldn't have enough information to restore them. 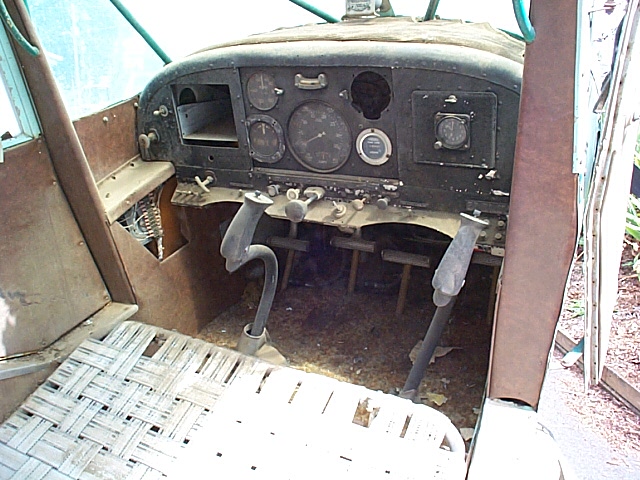 Commonwealth airplanes were a step up from the basic planes of their day, and had an electrical system including a starter. There was an option for radios as well. The "dashboard" was very stylish, with a large center instrument panel flanked by two smaller panels, all shock- mounted into the dash. You can see that the original dashboard was completely cut away (look at the cut line that parallels the upper curve of the dash) and parts of it replaced peacemeal. The lower switch panel, among other items, is also a "midnight modification". It looks like a bunch of kids used it as their "fort". 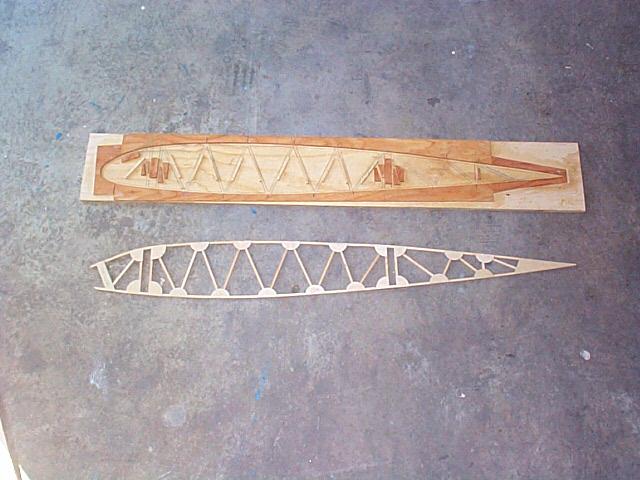 For those of you who are unfamiliar, the spindly assembly at the bottom is a wing rib, the skeletal element which defines the shape of the wing. The board at the top of the picture is the jig fixture which secures all the little rib pieces... I see more than 60 of them... in just the right position while they are glued. 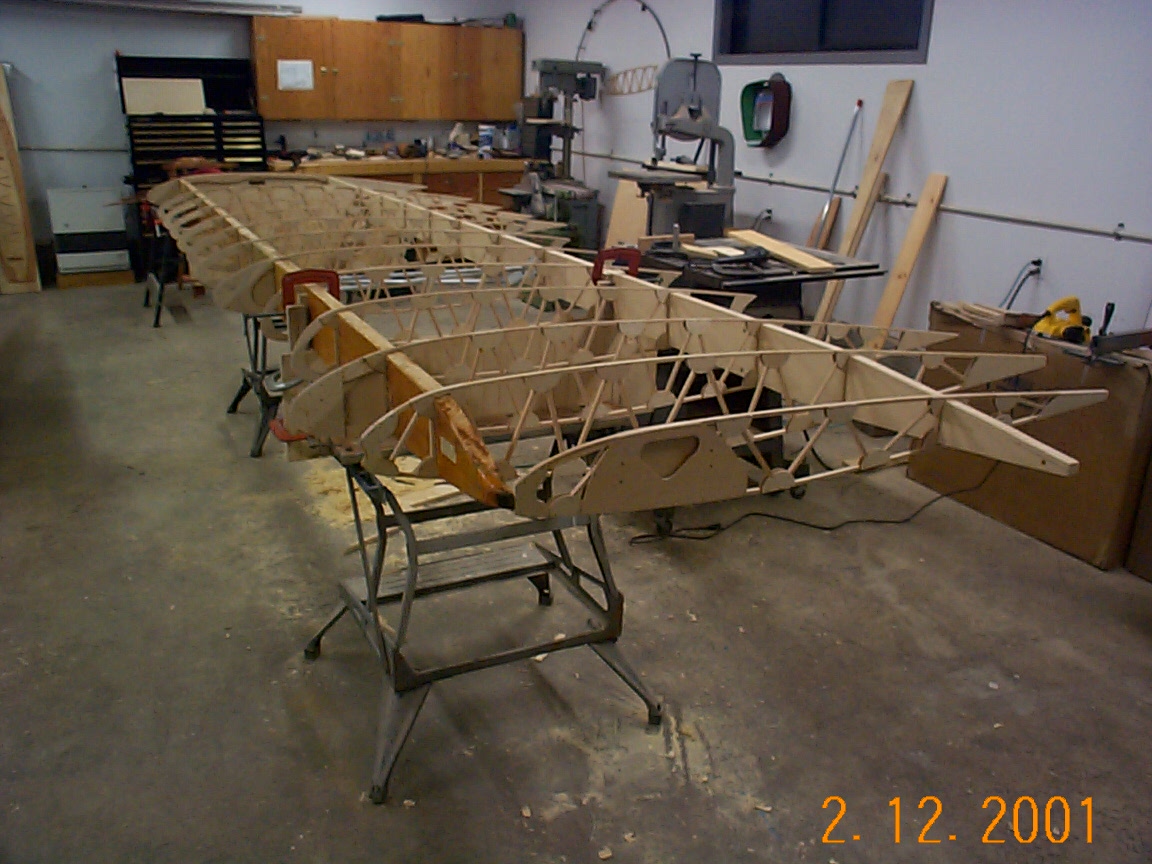 This is a picture of the ribs being assembled onto the spars. Lots of ribs, each made from many pieces, and then everything must be located precisely. The bigger story in this picture is in the background; notice the workshop. Most people cannot accurately comprehend the magnitude of an airplane restoration or construction project, but they can understand the efforts expended to create this kind of workshop. You need room for the tools, room to move around, light to see what you are doing, and heat as well. Managing so many parts and pieces does not leave room for the lawn mower, the vacuum cleaner that needs fixing, or the kid's current automotive project.