I think that most everyone has dreamt that they could fly simply, by flapping their arms. Once or twice I have dreamt it was an effortless glide like a soaring hawk, but more often it was a lot of work. I remember once flapping my arms furiously to gain a height of only a few hundred feet, only to realize that I still had to flap almost as furiously just to ease my way back down. I worried that I would have enough energy to do it. It was much like the flight of a white leghorn chicken; an unlikely sight, not high, not far, and not pretty.

I can still imagine though. I will often pause to watch a hawk swoop and soar while it searches the ground for its next meal, and I have seen them on "pleasure flights" just gliding along at airplane altitudes. I enjoy watching the little birds as they cycle from the trees past the feeder, and back. The local crows get first picking of our table scraps, and they sometimes get close enough that I can admire the way that they work their wings.

Sea gulls are by far the most interesting to watch. On a good day at the shore, there is enough of a breeze that they are able to hover just downwind of you and catch pieces of bread as you toss them into the air. With each flap of their wing, they show you another page in the book of "How to Fly"

The high point of my New Year's Day, stranded with my airplane in Rochester, were the minutes that I spent feeding the seagulls in a supermarket parking lot. While I was walking to lunch I noticed several of them fighting over a few scraps of food, so I went inside and bought a loaf of bread.

I doubt that it took half an hour to dispense the whole loaf, but I became so lost within a reverie that it seemed the whole day. I watched them cruise in, watched them circle in a holding pattern, and watched as they landed and took off in front of me. I marveled at the things that they did with their wings in each mode of flight. Just like any good pilot, they flew mostly with their fingertips, which is to say that the most significant changes to their wing are made by the way with which they position the long feathers at their wingtips.

They can splay them out to get more wing surface for slow flight, or tuck them tightly to cut their drag and make higher speeds possible. With the stronger slipstream in cruise flight, their control inputs are so small that they are imperceptible, but when they slow to land, they display all their tricks right before our eyes. The tip feathers fan way out and the wing feathers spread out to fill the increased span. The profile of the wing changes too, becoming quite arched, to wring the last little bit of lift from the air.

As they glide in on long fat wings, the start of a stall can often be noted by a ruffling of the small feathers on the top of their wings. This is their cue to make the final transition from flight to ground by fanning their tails and rotating their wings to vector their thrust downwards and forward to cushion the landing and slow to a walking speed.

I watched with fascination and marveled at the fluid array of sizes, shapes, and angles that their flight surfaces could assume. I couldn't help but feel jealous that I can never feel the air as keenly as they do. They are completely immersed in their slipstream and their every feather reports the airspeed, direction and pressure just as naturally as our feet report our balance to us as we walk along.

I thought about airplanes, and considered that they offer only the crudest approximations of flight. We sit in a big tin can, completely isolated from the feel of the wind and weather around us, and drowned in the noise of the engine. Like birds we can take off, maneuver, admire the splendor of the world around us, and land, but with precious little style. The body of the plane cannot change shape, and only the most complex airplanes can make only modest changes to their wing shape.

Consider the bottom line, if nothing else. A bird might have a maximum speed that is twenty times its stalling speed. My little plane has a two- to- one range and an airliner might have a range of six- to- one. A high end military plane (excepting the Harrier) might approach a twenty- to- one range, but it does it all with kerosene.

I could say that I traded a loaf of bread for a flying lesson, but I have watched birds before. I was more like a little kid at an airshow, marveling at all the tricks that the planes can do, and silently observing the personalities of the participants. I wished that I could control my flight through thin air without the clumsy prosthesis that we call an airplane. I wished that I could feel every nuance of the air that I pass through.. Just like the little kid, I wished that I could "fly like they do"`. 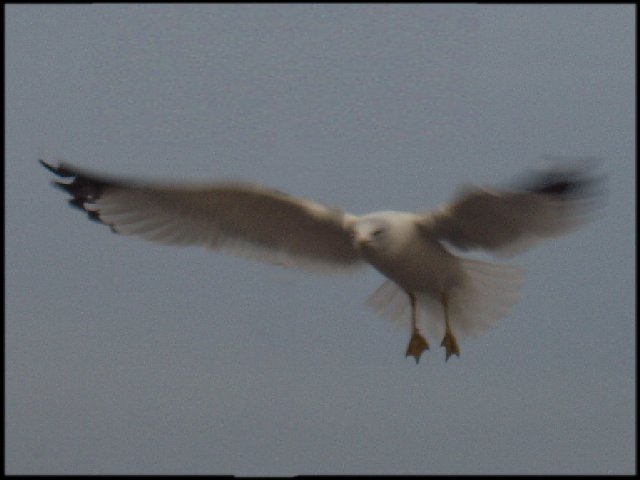 Into the wind, Flaps down, gear down for a routine landing. 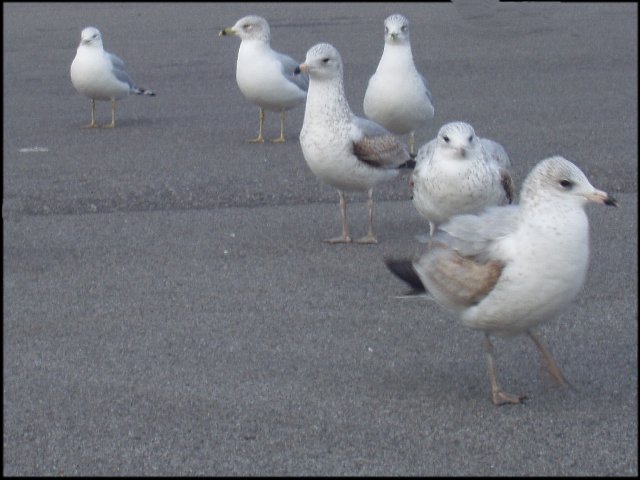 Patience is not one of the seagull's virtues, but the gang seems happy to wait for a moment while another slice of bread is pulled apart.

We like to think of gulls as serene creatures as they glide along the shore, and their call is as much a part of the sea as is the sound of the surf. For them though, the bottom line is "who is going to sleep in a full stomach tonight?". Perhaps for them too, flying is something they do mostly for work.