"You don't see them on snow" was the statement which clinched our discussion. A number of us had been sitting around the freight office in Syracuse waiting out a delay caused by freezing rain when I asked about the circular rainbows that surround an airplane's shadow against a cloud.

When we stand on the ground and see a rainbow we see only half a circle at best, because the earth fills the bottom half of our field of vision. On the other hand, terrestrial rainbows tend to be much more spectacular because they are often viewed against the darkness of a retreating storm. The rainbows that we see in the clouds below our airplanes are diminished by the whiteness of the cloud which contains them, but travel a full circle because there is nothing to block the "bottom half".

A shadow weighs nothing, and a cloud is barely more substantial. These rainbows are sometimes so ephemeral that they can't be readily noticed except that they follow along with us as we travel across the cloudscape. I had always thought that these rainbows were the result of the refraction that occurs when light moves past the surface of an object. It is referred to as "knife- edge refraction" and it can be demonstrated by placing two razor blades facing each other edge- to- edge with only the tiniest clearance between the two. When the sun shines directly through this narrow aperture, it is broken into a "rainbow".

I was content with my analysis of circular rainbows, but I was disturbed by the fact that the water droplets of the cloud could be creating these rainbows in the same way that normal rainbows are created and viewed from the ground. There were five of us sitting around the office that morning, and I tossed my refraction theory to them when other conversation lapsed. Two of the guys shrugged their shoulders, as if to say " you look, its there, so what?" the other three of us tossed the idea around and one of them, recalling his shadow watching days as a flight instructor, said that he never observed a circular rainbow cast upon the opaque canvas of a snowy landscape. So ended my refraction theory; the rainbow we see around our shadows is caused the usual way, by sunlight passing through the water droplets within the cloud.

Of all the circular rainbows I have seen, the most memorable one occurred ahead of me rather than below me. It was on an evening last summer as the sun was setting behind me on the way to Newark. I was in a clear sky with a bank of clouds straight ahead, and the setting sun directly behind me. With only the red light of the sunset to work with, the rainbow was comprised of only shades of red.

More recently I have had many chances to see rainbows in the clouds below me as I climb away from Syracuse right about dawn. On the most interesting morning yet, I cleared the cloud tops with only my last 100 feet of climb, just as the sun was breaking the horizon on my left. As it rose fully above the clouds, it cast a rainbow that stretched to my right as far as I could see. The circle of the rainbow was distorted into an ellipse by the extremely flat angle of the sun and my low altitude above the cloud tops. I was at the narrow end, and each arm reached out to meet the big end someplace near infinity or maybe Rochester.

I had misunderstood the phenomena that I had been admiring all these years, but it didn't hurt my appreciation of them. I fared no better than the guys who don't question what they see, and no worse than the fellow who sank my refraction theory. I look, its there, and its beautiful.

As a postscript, 02/18/02. Several of us have discussed the role of knife edge refraction on the shadows we see. We agree that the rainbows are caused in the "conventional" manner, but that our shadows "fill in" as we climb due to the knife- edge phonomena. As we climb, the shadow grows less distinct, and at some point the fuzzy shadow is surrounded by brighter light. We believe that light is being refracted from both sides towards the shadow, ringing it with a double hit, and an increased brightness. 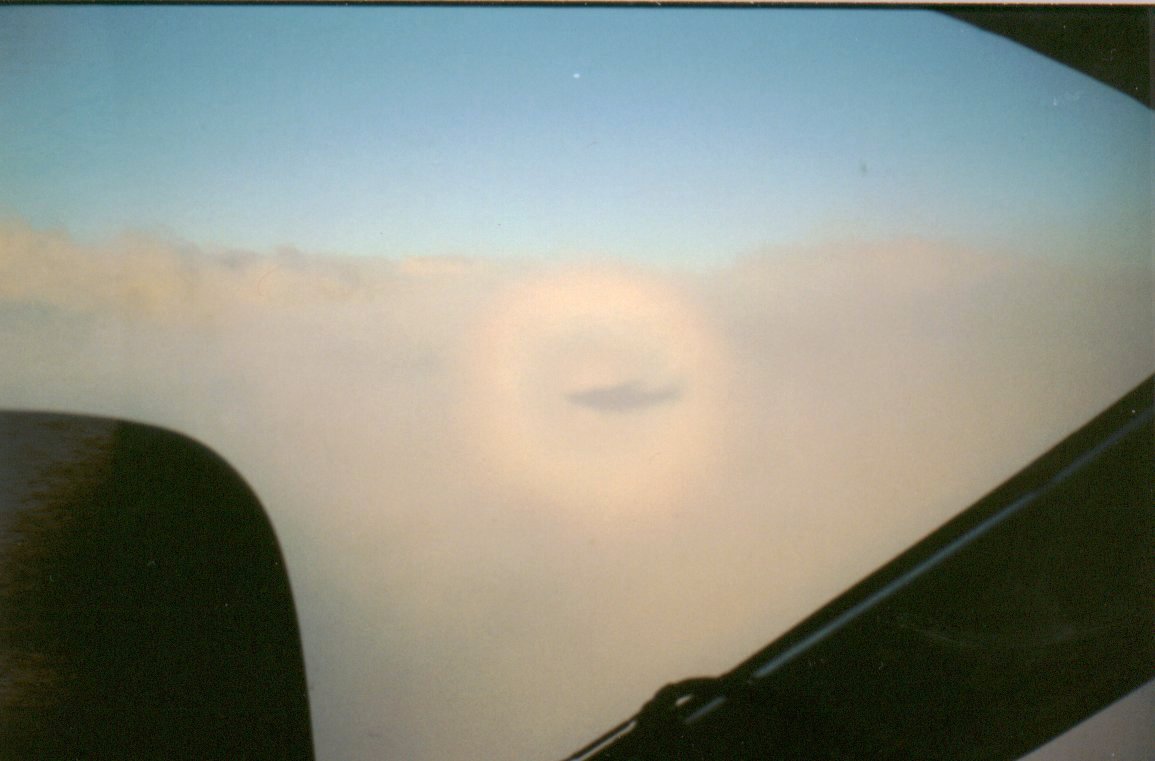 A good photo of a circular rainbow cast within a cloud as I was descending into the Great Lakes Gloom one January morning this year. The clouds to my right were higher, and the rising sun was to my left, putting the shadow out my side window.