I looked up from my clipboard just in time to catch a fleeting view of Keuka Lake as Bluff point passed off my right wing. It was one of those recent nights of wicked cold under the full of the moon. The lake was boiling its heat into the empty sky and creating a train of moonlit clouds above it's wind- swept waters. It was beautiful, and I had almost missed the whole show because I was doing paperwork.

I don't mean to disparage those folks who make their living at the receiving end of other people's paperwork, because somewhere, somebody has to keep track of what is going on in the trenches. Someplace out there though, there are a few people who would do well to look at our end of their precious piles of pulp.

For just a few moments I would like to stand like the Marlboro Man, cool and aloof, leaning against the side of the airplane while I watched Mr. Paperwork fill out, sign, and sort triplicate and quadruplicate paperwork for manifest, hazmat, and loading details. Sometimes this is done within a frame of perfect tranquility, comfortable in shirtsleeves on a calm summer evening with the benefit of daylight.

The memorable moments though are amid torrential summer downpours, or like last week with the temperatures below zero, heavy snow, and a howling wind. Even if the paper wasn't damp, the pen is balky because the tip is frozen. I can't help but wonder how different the officeplace would be if the people who mandate paperwork actually had to fill it out in the "field environment".

Sometimes the Marlboro Man would be doubled over in stitches of laughter as soggy papers tore under the pen, pulled in half rather than separating along the perforations, or flew in the wind. More often though he would stand in the cold wet dark of the world before dawn, stoically enduring the dull aches of cold and wet. With tired eyes he would watch while Mr Paperwork trudged through his routine, a small flashlight clenched in his teeth.

The paperwork doesn't end with the commencement of flight; you can't expect a pilot to sit alone in an airplane with nothing to do. The first order of business, just after clearing the airport area, is to figure the times for taxi, takeoff, and estimated arrival, and call them back to the loading crew. Then there is time to "do the laundry" if necessary... some of the wet papers are hung from a big clip on the sun visor and others are spread around the cabin so that they will dry before being stowed.

After that, there is the opportunity to do paperwork that is more specific to the flight, namely the aircraft logbook. Each round- trip flight requires that data be entered into about 60 places, including ten which record several important engine operating parameters. This is what I was doing instead of admiring Keuka Lake on that beautiful night.

The most onerous paperwork is completed before the flight can commence. It is done under a deadline, whereas the logbook stuff is discretionary, sort of like the homework of school days. It has to be done, but there is some flexibility about exactly when.

Like any genuine kid, I usually wait until the last minute. I most often squander my flying time admiring the scenery, watching the continuous interplay of the sun, the clouds, and the lands below. On nights when there is nothing but icy gray outside my windows, the paperwork doesn't get done either, because I am absorbed by the unfolding details of the flight.

I remember many mornings after parking the airplane, sitting in my seat with the first warmth of dawn coming through the windshield, leisurely fishing out all the numbers that I needed to complete the night's homework. With just as much fondness, I can recall sitting in the plane amidst the dark swirl of a winter's night, completing the same homework.

For better or worse, I had just been on an airplane ride, and it had captivated my entire attention. Some people have never had this chance, and lots of other people would be willing to pay money just to look out of my office windows for a while.

I guess that I fly for free, and Mr Paperwork writes my paycheck for all the tedious, frustrating, and perhaps senseless things that I do for him. 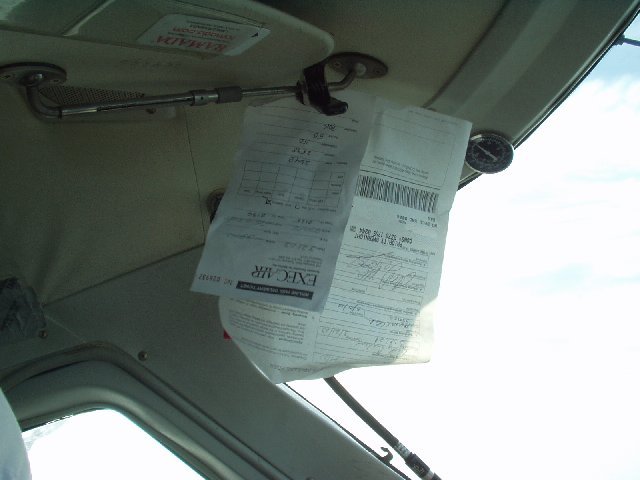 With the defroster turned way up, light papers dry from the sun visor arm, while the multi- sheet forms do well enough laid on the glare shield or the right seat.