My wheels had been off of the ground for five minutes before the word "victory" rolled through my mind. I hadn't been thinking in terms of winning or losing, of beating or being beaten, but suddenly I realized how badly the gray grinch of winter had been dragging me down. With a contented smile, I cruised along, savoring the morning. I watched as every detail of the snowy ground passed slowly below, and I basked in the novelty of a clear blue sky.

I was dressed warmly, but the cold was starting to work through the layers of clothing. I thought of a flight I made to the Albany area last summer, when I was so hot and uncomfortable that I couldn't wait to get home. The heat on that afternoon was more uncomfortable than the cold on this winter morning.

In the summer though, an airplane ride is just a matter of goin' flyin'. You arrive at the airport, drop the tiedown ropes and go. In the winter, even a simple flight is like launching a mission. I loaded my kerosene heater and three pieces of ductwork, the battery charger, and a snow shovel into my plow truck in preparation for this flight. Arriving at my plane, I set up the preheater contraption and then cleared snow and dressed the runway while the engine compartment warmed.

After half an hour of fussing in the cold and the wind, under a sun that seemed to offer plenty of light but little heat, the plane was ready to go. The engine started effortlessly, and after warming it some more, I taxied to the end of the runway where the flight faced one last hurdle. I had to shut the engine off and get out of the plane and turn it by hand to point it back up the runway, into the wind for takeoff. There wasn't enough width or traction to maneuver a normal turn.

There were lots of reasons to stay home, to stay in bed with the covers pulled over my head, but that would be capitulation. I hadn't flown the plane in a month, and if I let this opportunity pass by, the gray grinch would own my soul for the rest of the winter. The dull ache of winter exists mostly because we fail to assert ourselves.

As I planned this Saturday morning jaunt, I didn't regard it as the season's great match- up of good versus evil. The airplane needed exercise, and I needed my batteries charged. If commercial piloting is like driving a truck, then hobby flying is like riding a motorcycle; I needed to go for a ride.

You don't just fly an old airplane like mine, you hold hands with it. When lovers hold hands, gentle fingertips talk and listen, and it is the same with the airplane. Fingertips nudge the plane's path over the ground, but they also find themselves caressing the controls. Ears tell you what she is saying, but fingertips tell you how she feels.

It wasn't until I had established this conversation with the airplane that I realized how great a victory had been achieved. I had gone to the gray grinch's own playing field, beat him at his own game, and broken free of his oppression. Winter will not be any shorter for what I did, but it will be much more tolerable, knowing that I have the power to overcome its unpleasantness. 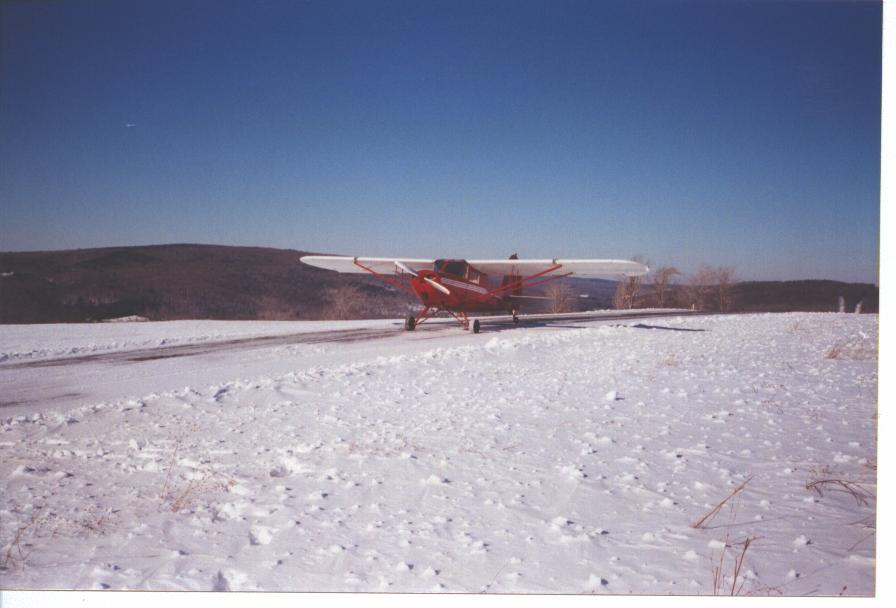 I posed the Commonwealth on a bare part of the airport after the flight. It was quite a pretty day. 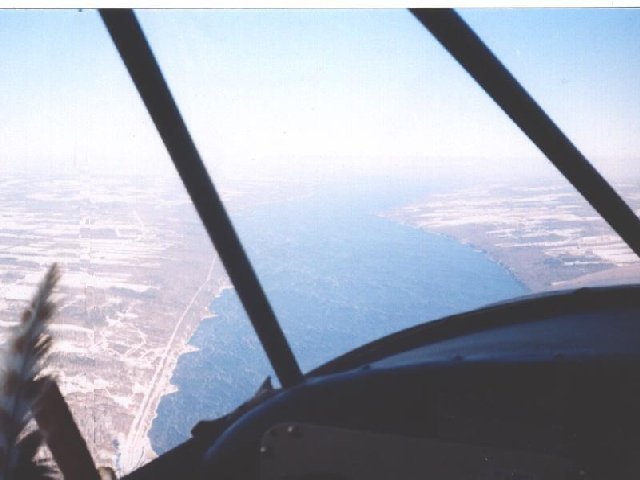 A view north on Seneca Lake, taken en route to my hearty winter breakfast (extra grease, please). Note the "steam" rising off of Seneca lake. This lake seldom freezes because it is straight enough for the wind to work it readily, and the incredible depth (600 feet in this area) provides a large heat reservoir. None the less, the 32 degree water was a lot warmer than the arctic air flowing over it, forcing such rapid evaporation.

The turkey feather in the far left of the picture has been right there for the six years I have flown the airplane. I placed it there after finding it on Larry Huntley's grass strip during my first foray with the airplane.