bobtilden.com
ON A SUNNY WINDOWSILL
January 30, 2001

For the last ten years or so I have had an expression to describe the darker months of the year. Darker, you may note, has an "R", just like January, February, and March. I refer to them as "the pits of winter, but sitting here in late January I can't decide whether we are now in the deepest part of the pits, or whether we pass that point in February or March.

Each of the months are worthy of nomination; January is the darkest, February is still cold, and March has only false hopes. Logically I would have to nominate the first week of February, based upon the loose conjunction of seasonal midpoint, cold, and lingering darkness.

I suppose then, that the middle week of January was just a practice session. It started with a Monday evening approach to Newark in a low fog, and finished with a Saturday morning departure from Newark through a layer of freezing rain aloft. A Sunday morning jaunt to Weedsport in my little plane left me satisfied, but uninspired.

It was a few days later that I realized that things weren't so bad, after all. The previous week's weather had been three poor nights sandwiched between two bad nights, but there were a few positive notes to the experiences. The Sunday flight was dull, but a whole lot better than staying on the ground.

Tracks in the snow at the Dundee airport triggered the change in my thinking. There were a few car tracks made in the days since the previous snow, but no airplane tracks were to be found. Nobody at Dundee had been inspired enough to break the January doldrums on this cold and cloudy weekend. Other friends at grass strips in the Syracuse area were grounded by the heavier snow that covered their fields. There were almost a dozen pilots gathered for breakfast at Weedsport, but I was the only one to arrive by airplane.

Every season has its charms I say, but in the winter we have to look a bit harder to find them. The airplane is happier because cold air is dense air, and the wings lift their burden much more readily. The propeller, itself no more than a spinning wing, is able to take a stronger bite into the air with each revolution. The engine too, is happier because each cubic foot of air that it breathes contains more oxygen to feed its fires.

Clouds are usually lower in the winter, and they are also flatter. There are lots of opportunities for humble little airplanes to climb into the fantasy world of blue and white on top of them. Finally there is the reality, fanciful as it may be, that one tank of gas flown directly south will turn the world below from white to brown. After one more tankful, the wheels can roll to a landing in lush green grass. I could be in summertime by suppertime... but I'd likely face a frosty reception from my wife upon my return.

So my Sunday flight was uneventful, a routine flight to one of the few watering holes that hasn't frozen over for the season. I flew low over the ice fishermen on Cayuga Lake, and I flew on top of the clouds at only 5000 feet. Down low, it was a monochromatic world of white snow, gray woods and gray towns. The visibility was good, but there was a cast of milkiness to the air, and at twenty miles or so, the white ground faded into the whiteness of the sky.

Above the clouds, the air was crystal clear and the sky a bright blue. Visibility in the dry air stretched for a hundred miles, if there was anything was to be seen. From my vantage just above the tops, the cloud deck seemed to stretch forever, and in the distant southeast I could see the higher clouds that marked a coastal snow storm that was leaving a foot of snow north and west of New York City.

Adventure and excitement are great, but let's not forget that there is much to be said for mere contentment. I rode along, my feet warmed by the airplane's heater, and the rest of me warmed by the sunshine streaming through the windows. The wings were happy and the engine purred like a cat on a sunny windowsill. It took me several days to realize that my flight had been a very comfortable place to sit and watch a bit of winter pass by. 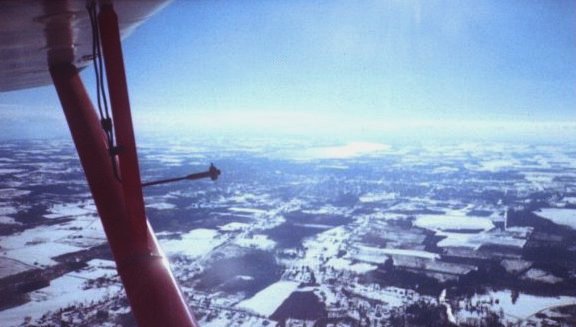 This picture looks to the south, and the north end of Skaneateles Lake is in the distance. Note how the earth and sky blend into a milkiness near the horizon. 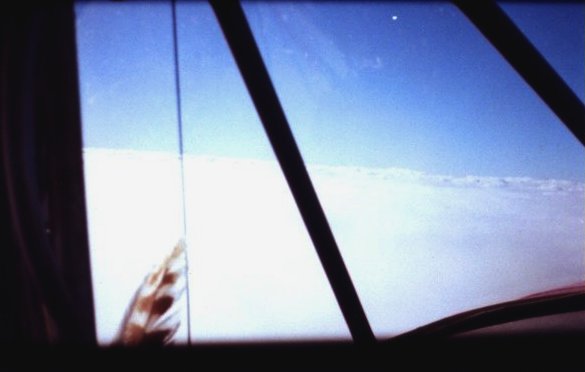 Again looking south, this time on top of a layer of clouds at 5000 feet over Cayuga Lake. Note the crisp horizon line in the drier air above the clouds. It is too bad that the sunlight made such a glare on the plexiglass windshield.

The turkey feather in the foreground was found on the runway of one of the local grass landing strips, and has traveled with the airplane and I for the last two years. Wild turkeys are so clever that Benjamin Franklin nominated them as the national bird.