I am neither the first nor the last to say it, and I have said it many times before, but I will say it again... the sky is a beautiful place to sit and watch. Last Friday morning's return flight to Elmira was well short of a revelation, but it reminded me once again of how nice a "dull day at the office" really is.

The elements of this story go back to Christmas time when I bought my mother a "magic picture frame". It sits atop her dresser along with the other pictures she has accumulated over the years, and its slightly heavier dimensions are noticeable only on a second glance. A closer look also reveals two wires running from the back of the frame, one a telephone line and the other a power cord.

Part of the frame's magic is that the picture within it continually changes. One picture gracefully fades and another appears in its place. As many as twenty pictures can stroll through its slide show, but the other part of the magic is that the slide show can change every day. Every night the picture frame automatically dials in to its home base to receive a new batch of pictures that I have posted from my computer. There are no controls on the picture frame, so that my mother doesn't need to do (or know!) anything to keep the pictures coming.

This sort of gadget goes hand- in- hand with digital photography, and I have been waiting for the cost of good digital cameras to come down into my range. This year, with a boost from the magic picture frame, a compromise level was reached. Last Thursday night was the first flight with my new camera, and it was a giddy feeling to be able to take dozens of pictures "for free". I took pictures of everything, trying to determine what the camera could produce.

It will capture city lights at night, but the resulting picture is a dizzy field of colorful wiggles because of the slow shutter speed required. The morning flight, at sunup, was great though. I took pictures as the planes were loaded and as we taxied out. As soon as I was turned on course, I set the autopilot and pictured the flight with the new camera.

It was a gray winter day, with absolutely nothing special about it. The temperatures had warmed quite a bit from the range of zeros that we had experienced for the previous weeks, and the sky was sort of a milky gray as a result. Clouds were here and there with no great organization. Just before takeoff, I captured the day's only rays of sunshine as they activated every scratch on the airplane's plastic windshield. En route I passed among clouds, was eventually engulfed by them, and accumulated enough ice to bother the airplane. Approaching Elmira, I dropped out of the clouds ten miles from the airport, and took more pictures on the way in, releasing the autopilot just a mile before landing.

Everything about the flight was unremarkable. Every flight is different, but within the main body of experience we consider as "average", this fit right in the middle. I never would have thought of taking... wasting... a single picture with a film camera, but of the 50 digital pictures I took, there were several that I will be happy to keep.

The sequence of pictures made a nice record of a dull flight which had a little bit of most everything included. One picture captured an isolated patch of sunshine illuminating a thin gossamer of cloud floating close to the ground, another captured hints of pastel pink clouds among a field of charcoal blues and grays. Yet another shows a sunlit raft of puffed- up clouds at my altitude, floating in the distance, yet framed by decks of flat winter clouds above and below me.

The ability to take an unlimited number of pictures allowed me to share this "plain ol' flight" with other eyes. In turn, it caused me to see the flight through those eyes, and it refreshed my appreciation for the every- day beauty that surrounds us... every day.

These pictures are a bit muddy. The higher resolution originals were accidentally erased. Sorry. 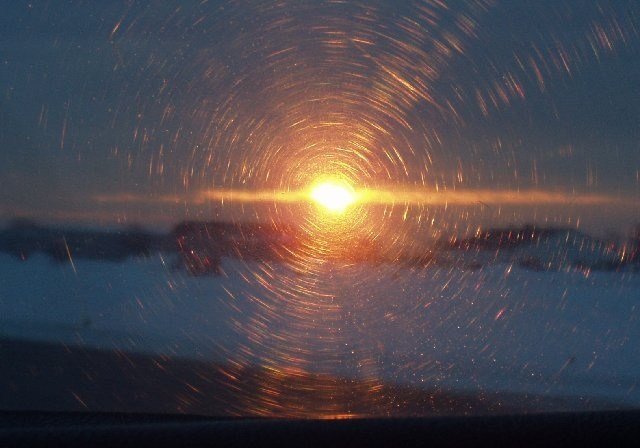 Any view of the sun is a newsworthy event during the Central New York winter. When viewed through an acrylic windshield, the sun spins its own spider web and becomes overwhelming. 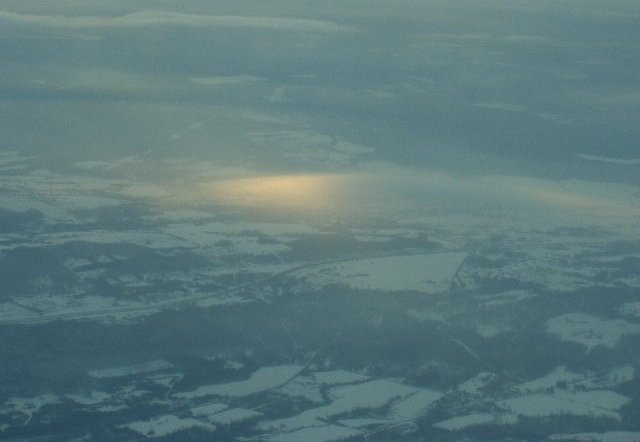 A few isolated rays of sunshine pass through upper clouds and strike a gossamer layer that is close to the ground. Note that the cloud covers much of the area below, but becomes opaque only where the sun strikes it. 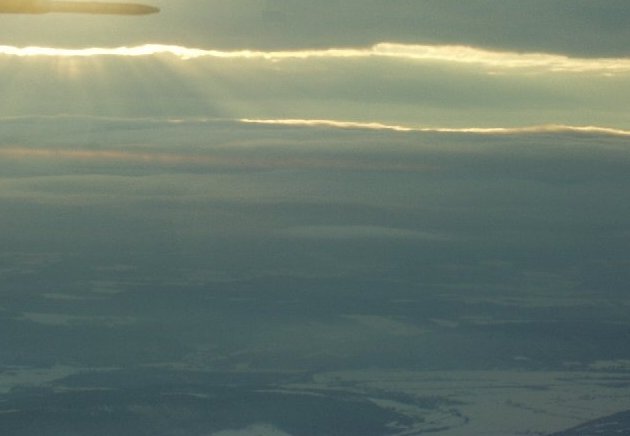 Sunshine slips through a break in distant clouds to spread a bit of morning light and color. 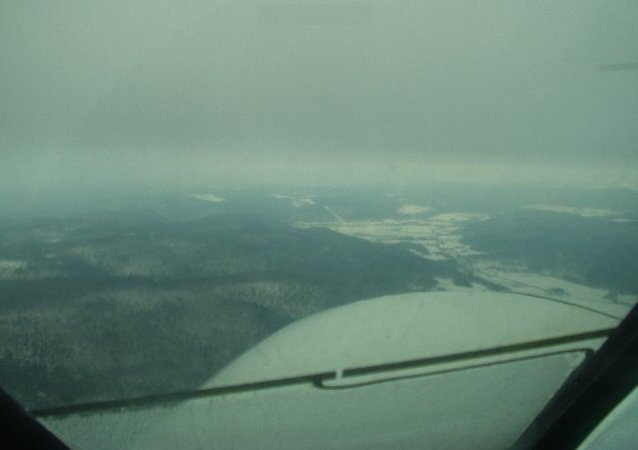 Below the dull gray clouds that covered Elmira all day, a long vector on a 210 degree heading to intercept the runway 24 ILS outside of Alpine. State Route 13 is parallel to the right, and Alpine junction with Route 224 is ahead where the valleys intersect.