One afternoon last week I told my wife that was going out to check my trap line. She had brothers who trapped many years ago, so she was familiar with the term, but she looked at me with a puzzled expression. "You know, at the airport" I said... She then understood that I was going up to visit my little red airplane and check the mouse traps that are set inside

Nothing good happens to a hill- country airplane during a winter like this year's, or last. The good flying days are interspersed with lots of bad days that leave the runway covered with drifted snow and crusty ice. In order to fly, the snow has to melt away and the resulting mud must then be refrozen. Weather, the good and the bad, is an ongoing parade of quirky circumstances and coincidences, but a good thaw without a stormy return to winter is not much to hang your hopes on.

In the short walk to the hangar, there was everything from open ground to four foot drifts. Where I had piled snow with a plow last month, hoping to be able to fly the next day, I was able to walk on top of the ridges. I sank deeply into the fresher drifts and the older drifts yielded only after my weight was upon them. It was a pretty day but the ground was ugly.

The plane sat in the hangar with snow drifted to wheel- top height. As I looked around, in the hangar and my tracks in from the road, I tried to imagine how many weeks it would be before the plane would fly again. I walked around, checking my traps as I promised, and trying to keep the bad thoughts from crossing through my mind. I looked away from the plane, but my eyes settled on my '46 Plymouth "project car", and the bad thoughts won their battle.

The Plymouth has been a project car for more years that I will admit to. It has always been "next winter's" or "next summer's" project. I feel bad because I remember when it was driveable, and if it never runs again, my soul will be sent to a mechanic's hell; it will spend eternity doing nothing more imaginative than squeezing the handle of a grease gun.

My greater fear though, was for the time I have here on earth. I certainly hope to outlive the fabric that covers the fuselage and wings of my airplane, and if so, it will be my responsibility to spend a year's discretionary time and money on an overhaul of the airframe. Furthermore, the engine is old enough that it ought to be overhauled at the same time. This is a commitment far more ambitious than my failed Plymouth project.

I was able to run away from my thoughts by focusing on more immediate concerns, things I could do something about. The engine had not flown for six weeks, and there was a real possibility that it would be another six weeks before it flew again. It is bad to ground- run an engine because the water in the blow- by gases condenses inside it, but it is bad to leave the engine idle so long that the film of oil runs off of things like the camshaft lobes.

I decided that the best thing to do was to run the engine for five minutes or so, and let all its parts sling oil around to each other. I climbed in, threw the switches, and pulled the starter while pushing the primer. The engine caught before it made even one turn, and with a little more prime, settled into a relaxed rumble.

From its spot in the hangar, the plane looks out over a valley and the hills beyond. I sat there amid the noise and vibration, one hand resting on the throttle and the other on the stick, and savored the sensations. It was as close as I was going to get to flight, and it was close enough to pretend for a moment. I recalled memories of many flights and the places "we" had flown.

Just sitting there, I was reminded of the satisfaction that the plane brings me, and I thought of the perspective that it gives me at work. My job is to transport boxes, and the notion of flight is only incidental to the task. There is beauty to be seen, but it takes the eye of a small plane pilot to pick it out from the distractions. To see beauty from the four- lane, you have to be conversant with woodland paths. I am trapped by flying, and my little red airplane always reminds me why. 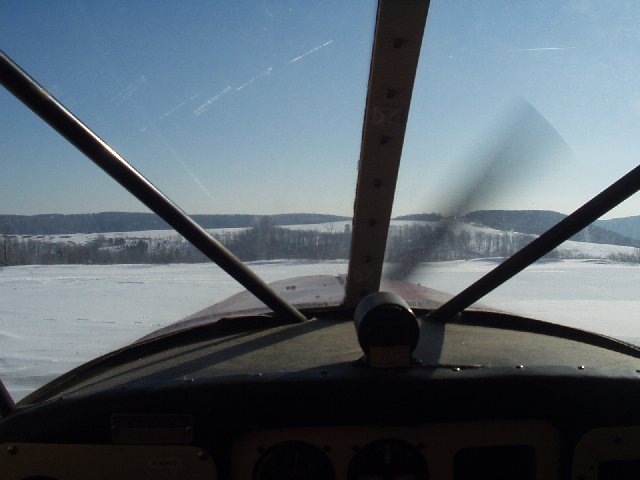 One of the many "redneck" jokes covers hill- country pilots; "You know that you are a redneck if... you have ever spent the evening taxiing around the airport drinking beer and listening to country music on the ADF". This picture is much what it would look like, and I couldn't help but think of that joke as I sat in the plane with my hands on the controls.

A picture of a good winter day, just outside of the hangar... If it was a bad day, it would have been snowing. The distant wind sock says that there is a south wind of about 15 MPH.