I would hate to be accused of making any complaints about sunny weather, but I think that most people would agree that all of last week looked a whole lot better than it felt. Each day was sunny, but as dusk gathered, I would look around and see that there wasn't much change in the snow cover. Places that were cleared of snow were a bit larger, but that was about all. I spent most of the week working on cabinetry, and had to run a heater to make the shop passably warm.

Saturday started to show a bit of promise, and late in the day I went up the hill to the airport to see how things looked. Much to my delight, there were several pilots there, sort of hanging around as though it was a summer evening. They had just finished digging the snow drifts from the hangar doors, and were hoping that the wind would die down as the sun moved lower in the west. Things were all set to go flying; there was a path plowed from the hangar to a makeshift runway that was short and narrow but adequate for people who were desperate.

Sunday dawned as pretty as promised and I gave quick thought to where I could go for breakfast. I could go to Dansville and choose between half a dozen restaurants, I could fly to Avoca and have a nice meal at Donna's Cafe, or I could go to Weedsport. Actually, my mind was already made up but I just wanted to savor the fact that I had a choice, even though the grass fields are pretty much closed. I knew that there would a bunch of guys gathered at Weedsport.

Getting an airplane from a standing start in the hangar, out to the end of the runway, and into the air is always tedious, and the chore was made no easier by our makeshift arrangement. Everything happened as it was supposed to, and I was soon cruising along and remarking to myself that "there is a difference".

I enjoy flying at work, but it is not the same as flying for fun. At work I fly someone else's itinerary, and their mission is to move packages in a straight line from on place to another... on time. All the flights are on an instrument clearance, and we are watched. The controllers expect us to be on course and at altitude, and have an ear for knowing when you have been caught unprepared. It sure beats workin' for a living, but it sure ain't flyin' either.

I flew along through smooth clear air and the plane handled just as though it was on tracks. It flew straight and level with no effort, and the slightest nudge would point the nose in another direction. Weedsport is northeast, and that is as specific as I care to get when I fly my own plane; I have no intention of figuring the exact magnetic course that is required, because I have no intention of flying in a straight line for that long. I wander, both to please my eye and to keep better ground beneath me.

The last time that I flew my plane was just before New Year's, and before that it was about Thanksgiving. I have flown it so little that I had started to confuse flying at work for "fun". There is a difference, and it was refreshing to be reminded of it.

Weedsport is a popular destination for lots of us folk with little airplanes, because the airport "office" is really a small diner. We can taxi our planes almost to the door, walk right in, and be greeted with familiar "hello"s. Sometimes there is quite an array- or disarray- of airplanes parked around the office, especially for the Wednesday lunches.

This was just a Sunday in February though, and I knew that a lot of planes, even some at paved airports, were trapped by the snow. I had the opportunity to fly though, and I was taking it with a clear conscience. I hadn't even bothered to rationalize that it was "Leap Day", somewhat of an extra day for the year. Leap Day is the day that can be set aside from the priorities that rule the 365 days of a normal year, and used for something special. It is sort of like finding a soggy twenty dollar bill in the debris along the edge of a parking lot.

Rosie and John had set their morning aside to help the rest of us celebrate, and they were hosting a Leap Day breakfast buffet in place of their usual fare. Their regular breakfasts are top- notch, but there were special things offered for this morning. Lots of people knew about it, and there was a good crowd. Half a dozen planes had flown in by the time that I left, and other familiar faces had arrived by car.

I stayed longer than I should have, even though I knew that the bright sunshine was starting to melt the frozen ground around my hangar. I would rather have spent the day with the airplane, but I flew home and found the other guys were just parking their planes too. I took my turn at the runway and they helped me pull the plane back into the hangar.

It was only ten o'clock, but already a splendid day. We sat around the hangar in the summertime chairs and talked about nothing in particular. We were just happy to be there again. For rusty pilots to take cobwebby airplanes out onto a short runway is just a bit of a leap of faith, but it was such a splendid way to celebrate Leap Day. 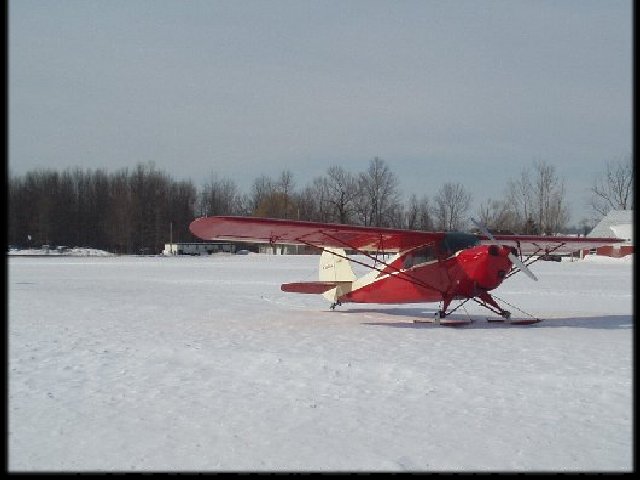 Larry had the most fun, arriving on skis. 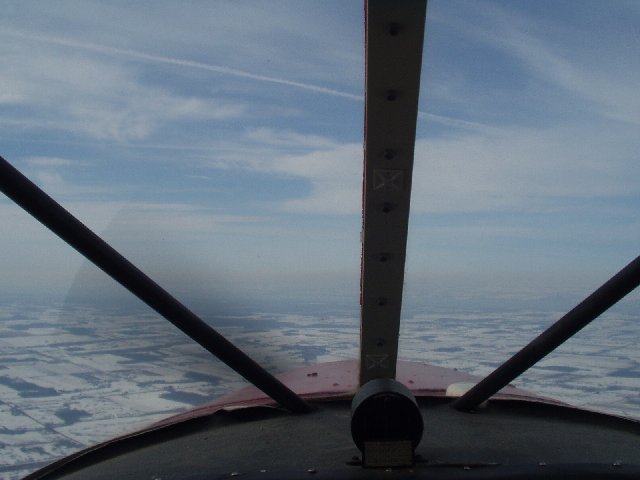 Returning from Weedsport. There is no mistaking the fact that it is winter outside, but an almost magical confluence of air temperature, sunlight, and cabin heat was able to make the plane comfortably warm.