bobtilden.com
CRICKETS IN THE BASEMENT
March 31, 2004

Last week brought us several milestones on our circular journey through the seasons of the year. Days became longer than nights when we passed the vernal equinox, and I left the long-johns on the hook at home on most of the nights. The date and time of the equinox can be calculated with great accuracy, but the long-john thing is much more subjective.

Some time around Halloween or so, the weather changes for the colder and the long-johns come out of the closet. By Thanksgiving they are a permanent part of the night's attire and remain so until about this time of year. I am not done with them yet, but they're on their way out.

There were other things too, the chorus of peeper frogs singing from every wet hollow, and flocks of robins picking through the greening grass. I heard several plovers..."killdeer"... out in the fields, and listened with great contentment one morning as "my" mockingbird sang his first song of the year for me.

This hearty fellow winters over on the north side of the Elmira Airport and I often see him throughout the winter. Early one March, I read from his stance and posture that winter's worst battles were yet to be fought, and he was right. Last December his body language told me that the recent cold would be forgotten by April. I suppose he was right again; January and February were so cold that I really didn't remember the spell in December. Frankly though, his spritely antics had me believing that he was telling of an easy winter ahead.

On this springtime morning the mockingbird sang his usual babble, and mixed it in with a long blue jay solo, a bit of cardinal, and a few bars of the robin's song. The day had dawned with a red, pink, and orange sunrise through clouds that were scattered at several altitudes above a misty morning. By the time that I arrived at Elmira, the sky was becoming organized and the year's first really nice display of puffy summertime clouds was forming.

The morning had brought forth one more marker of the changing weather, something that pleased me immensely because it relates to the comforts of the flight. We carry some strange freight on our planes, and sometimes I can hardly believe the things that people feel they need overnight. Last month I carried an electric lawnmower to Elmira, and I know I will see a rototiller or two soon. Cosmetic accouterments for the house and the car are regular fare, and so are barbell sets and other fitness equipment.

We often carry crickets. They go to pet stores as feed for snakes and they also go to bait shops. (A sticker reads "click it for crickets and other tasty treats... reptilefood.com") We see them all year around, but mostly in the warmer months. They are packed into boxes about half the size of a shoe box, with screening on two sides, and the boxes are often in bundles of four to six. From time to time the crickets get loose, but the bigger problem is the smell. They usually have a chunk of really old potato to chew on during the trip, but sometimes their catering is far worse. One morning a bunch of them were loaded right behind my seat, and since then crickets are put way in back with the haz mat when they ride inside the plane.

It is only the winter crickets that I keep inside though. Once the weather warms there is no reason for them not to ride in one of the compartments of the huge cargo pod that is attached to the belly of the airplane. They can be happy there and I can be happy that they're there too. On this morning I saw half a dozen boxes coming up the loader belt and suddenly realized just how nice the weather had become.

I knew that our new- found warmth was riding on a strong flow of southern air aloft, ahead of Friday's cold front. The morning's sun already had a hint of warmth to it as well. I smiled and told the loading crew to "put the crickets in the basement"... down below where everybody will stay happy. 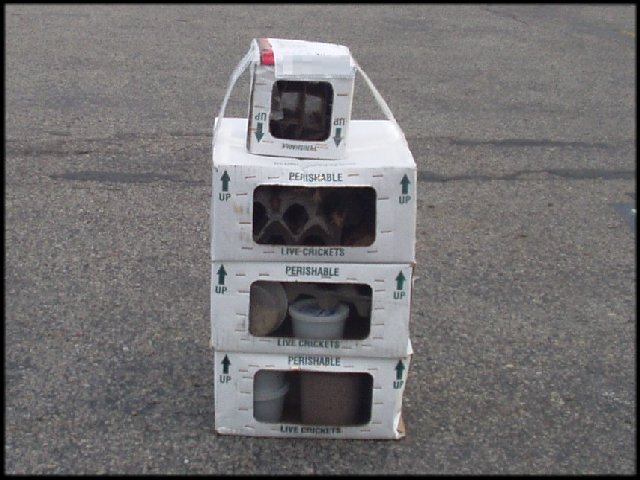 A typical stack of cricket boxes. 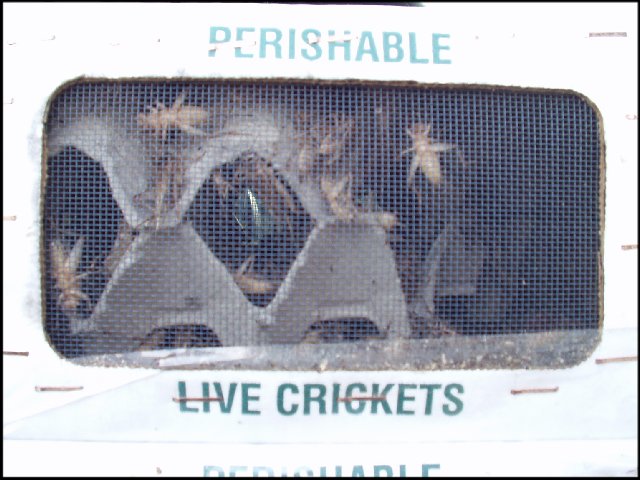 A close- up of the contents.