We are now well into April, and I would like to believe that spring has fought off winter's last serious challenge. Our days are now longer than our nights, and the clocks have been moved ahead. For months I have been anxious for April because of the way that my flight schedule fits around sunrises and sunsets.

All winter long I have opportunities to appreciate the dawn just as the sun first ignites the edge of the sky. As the spring season advances, I find the sun higher and higher as the weeks pass. With the change to daylight time though, I have another chance at it. The time change also brings me the last fires of sunset, as my evening departure is moved from dark into dusk.

I had eagerly awaited Monday evening's flight, but as the snowy afternoon wore on I started to think of other things that would be more fun. Things like staying home next to the fire for the evening seemed good. Monday night's trip was sort of touchy, and Tuesday wasn't much better. Wednesday looked as poor, but the plane easily climbed on top of the icy clouds. Under a clear sky, skimming just above a lush carpet of white, I watched the colors of the western sky fade into night.

By Friday the weather had cleared completely, and the sunset was boring in comparison. The sky had no clouds to catch fire, and the earth had no green fields to stand bold and lush in the orange light. No leafy trees or hedgerows cast long summer shadows across the landscape. Thursday was the special night.

A storm was making its way along the coast, and Atlantic moisture was being hurled inland. For most of the day, the radar showed long spirals of rain spinning towards us from the east, and in the early evening there were showers of cold rain heading straight towards us from the southeast. Drier air was in place above us, and the storm's moisture was dissipated into it.

We had clouds in great disarray. The sky was just like an anthill that was being stirred by a stick, as clouds at all altitudes seemed to scurry about, working to soak up the moisture. That is not the way it works, but that's how it looked. I can prove none of this though, because it was all in the half light of dusk.

I didn't even try to take pictures because I knew that they would turn out too dark to show anything, and the narrow field of vision could not adequately capture the excitement. The show was special for me, for my eyes only, as I plodded along with my load of boxes. This airplane is superbly designed for a mission profile which requires neither speed nor altitude.

The air was clear where there were no clouds, and I watched the lights from various villages wink out from around rafts of low clouds, and saw other parts of the landscape locked away behind walls of clouds and rain showers. For a while I flew just within the edge of a cloud deck, and watched the bright colors of the sunset filter through the mist. Long strings of clouds hovered higher still. Many had the puffiness of cumulus clouds, and had short gray trails of rain falling from them, silhouetted against the evening colors.

The airplane is such a special place to sit and watch the sky because you are surrounded by it, and the view changes constantly as you move along. Cruising straight and level on autopilot, there is plenty of time for great ethereal contemplations. Sometimes I look down, and think of sunsets I have watched from the ground; a hilltop among the summer songbirds, a beach with the swish or rumble of the surf, or a field next to a springtime pond filled with peeper frogs.

The sun throws a festival across the sky as it comes and goes, wherever you are. If you didn't feel that way too, you wouldn't have read this far. 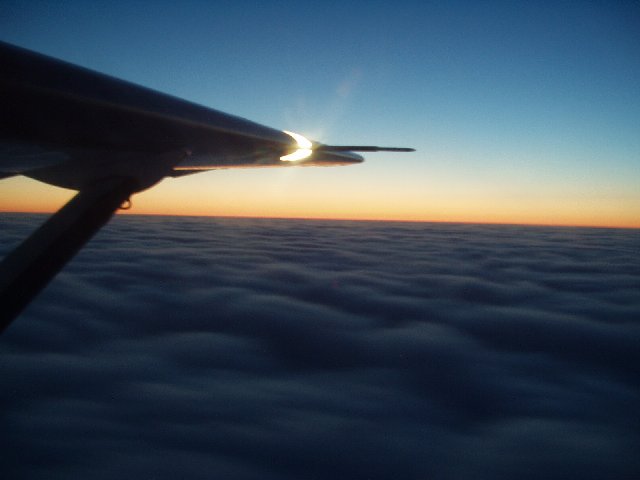 Wednesday's view at 5000 feet, sledding along just above the undercast, looking at the fading colors of the western sky.