Saturday was a late- breaking day. Clouds, visibilities, and a few rain showers played a cat- and- mouse game through early afternoon but then the skies started to brighten. By the time I was winging my way northeast to keep a very important date, I could see that the skies ahead were much clearer than around here. Winds were light, and seemed to diminish further as I flew into the new weather that was arriving.

By the time I reached my destination, the sky was completely clear and the visibility was superb. I entered the traffic pattern, swung around east of the field and landed to the west. As I skimmed past the runway threshold I could see that the grass was green and lush in the late afternoon sun, and that rafts of dandelions had started to bloom amidst it. It almost seemed that the plane sensed the soft welcome of the runway and landed itself without any input from me. Just as I heard the rumble of the tailwheel on the ground, the main wheels swished into the grass.

As I taxied in, I could see that the birthday party, my very important date, was already well attended and under way. Familiar faces stood outside among the familiar airplanes, and more were inside. Everybody was there but the guest of honor, who was the only person who didn't know that there was a party going on.

Several years ago I wrote about "Wilbur the Iron Man", the fellow who routinely flew his little Aeronca 250 hours a year, mostly on half hour hops to and from breakfast, lunch, or coffee at many of our local airports. I struggle to fly 50 hours in my plane, and many pilots aren't even that fortunate. Especially with Central New York's snow- belt winters, a consistent 250 hours a year is the mark of a dedicated flier. To paraphrase the advertising line, he loves to fly, and it shows. More significantly though, we love to have him around.

The occasion for the party was Wilbur's 80th birthday. The surprise was planned by his wife, and the Whitfords conspired by hosting the party at their airport. There were probably two dozen people in all, mostly the usual breakfast bunch, many with their wives. Also attending as an extra surprise were his son, daughter, and one of his grandchildren, all from out of town.

At 80, Wilbur has been retired so long that few people actually remember what he did, and his working years have faded into folklore. It is generally understood that he was a school teacher for a while after graduating from college, but that he spent most of his years traveling the east coast as the representative of a textbook publisher.

For the last year or so, Wilbur has been without a plane of his own and has made the coffee rounds as a passenger in some of the other planes of the familiar local flotilla. Soon though, as soon as the weather will cooperate for a long flight, he will go out to Oklahoma to bring back a Taylorcraft that is being held for him.

Many pilots would turn away from such a long flight in a 65 year old airplane with no radios, but Wilbur was a new pilot when the Taylorcraft was a new airplane. On an eastbound flight, he will probably have some amount of tailwind, and the flight might take 13 hours plus the time spent on four or five fuel stops. He will chug along low and slow, and his ready smile will find friends at every stop. I wish him soft breezes, lush grass, and plenty of yellow dandelions. 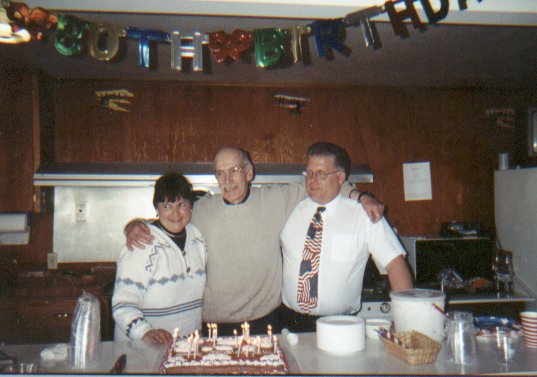