It should have worked out. I kept track of the weekend weather for days ahead, and Sunday morning was consistently forecast to be good flying. I had decided I would go to Avoca, because The coming Wednesday looked like it would present a plausible opportunity to fly to Weedsport. Good things happen to those who plan well.

I am still holding hopes for Wednesday, but Sunday was a bust. It was cold, windy, and raw by springtime standards, although anyone would have adored this sort of day in January. The ceiling and visibility were good, even though the unforecast morning showers turned into a steady light rain later. Since I was already at the airport by the time the first discouraging rain shower arrived, I decided to take the plane out for a short run before I went back home.

Frankly I was a little bugged. A long flight might have helped me get over it, but I was just as happy to keep the thoughts with me for a while longer. After takeoff I headed for Hornby, the township just to the west of the airport. I flew around and looked at farms that have disappeared without a trace, and I pondered their recollections in my mind. Kids not only think that they will live forever, but also believe that everything around them will always be there too.

I guess part of getting old is realizing that more and more of your youthful memories were staged in places that don't exist anymore. I have questions about my old days, and questions about the times of those who passed through before me. I never seriously quizzed Dad and his father, and Mom's father had so much information that I couldn't absorb it all. I would really like each of them back for an evening.

This current round of wishing started a few days ago when I happened past the cemetery near Hornby Forks and noticed that the Van Hoesen plot was overgrown with prickers and brush. Richard and Rachael were born in the early 1800s and died in the late 1800s; they were great grandparents of Mom's father, and are buried there with a young son.

I flew past the cemetery, and looked north up the road from the Forks. Once, like so many other country cross- roads, Hornby Forks was the shopping and social center for families for miles around. Now it exists mostly as distant memories that disappear one by one, each time that a pair of old eyes closes for the last time. I am told that the Van Hoesens lived up that road, as did their next generation for a while. Today there is nothing to be seen of any habitation.

I decided that I would clean the cemetery plot later in the day, using the time that I would have spent with a long flight to breakfast.

The experience was fully as recuperative and satisfying as flying would have been. The afternoon was appropriately somber, with a steady light rain falling from low gray clouds. The morning's weather had deteriorated, but it was just fine for me. I worked along, cutting and pulling, and listening to the songs of springtime birds that were undaunted by the October weather.

I found shards of flower vases, and a rusted steel flower holder. I wondered who had put them there, and when. I wondered if there was someone else around who had been meaning to clean the plot, but hadn't got to it yet. An unknown fourth or fifth cousin. I wondered how many people now consider Richard and Rachael to be "their" ancestors. I wondered how many have stayed around here and where the others have wandered to. A lot of genes are swapped around in 150 years, and there aren't near as many "strangers" out there as we might think.

I thought about all this and I wondered about the life and times of Richard and Rachael. I wondered too, what memories had been placed in the ground, below the two shallow depressions in the brambles and periwinkle.

A small airliner flew overhead, low but buried within the gray of the clouds. I could readily imagine everything the pilot was seeing, thinking, and doing as he was preparing his approach to Elmira. My hands though were buried in the earth of the ages. The mechanics of flight seemed so dull and insignificant when cast against the facts and speculations of those who have passed before us. 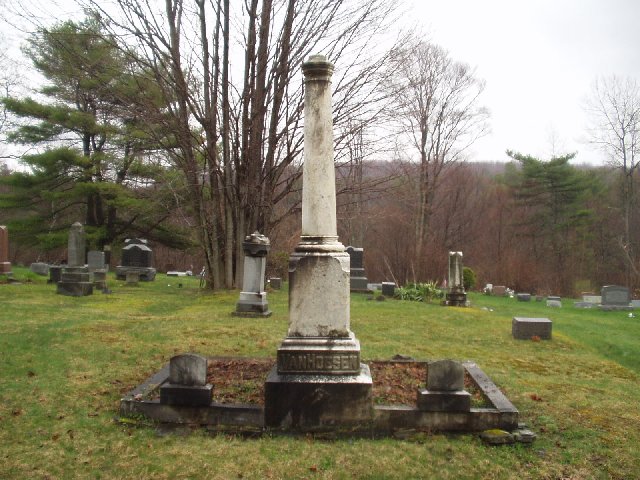 The Van Hoesen plot. The monument is on the fancy side, but not that fancy for the times. It has often seemed curious to me that old monuments in rural cemeteries can be quite grand compared to today's "wealthier" times. 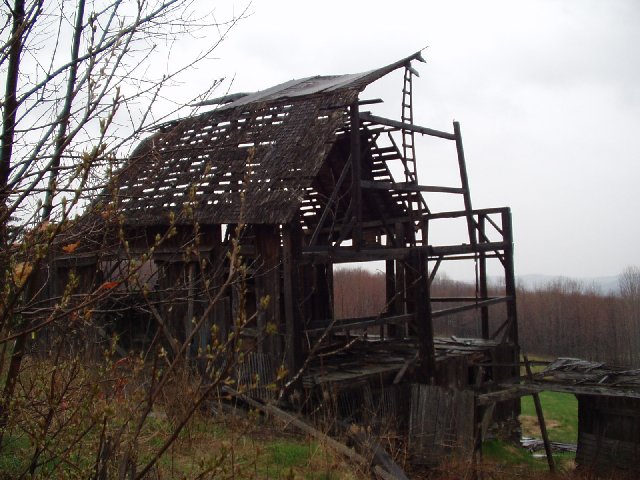 A barn that is not too far from the cemetery. Somebody built it years back, starting with stones picked from the hillside fields, framing it with trees from his woods and topping it with shingles likely rived at a local mill. Subsequent generations have had no use for it and it has gone to ruin.

the ladder that plaintively reaches to the top of the hay loft bothers me. Someone once climbed it to the top and proudly surveyed what he had built. No doubt it was climbed on other occasions and the bounty within and around the barn celebrated with a quiet and tired smile.

Does the ladder now suggest that modern economic theory "ain't all that great"? Does it stand in mute testimony that common people once occupied a much loftier position? Or does it simply say that times have changed; get over it.