I knew my plans were ruined, and I knew it even before I got into my airplane. I have years of experience with little planes, and I have grown able to recognize these problems before they start to unfold. The sky was an unbroken blue and the distant hills were the lush green of a wet springtime. There was a shining white sea of fog that separated the hilltop airport from the neighboring hills to the north and west, and a little sliver of fog flowed into the cleft south of the field. The tail of the windsock hung straight down, and if I stood still there were no sounds to be heard but the songs of the birds.

I rolled the plane from the hangar and faced it across the rays of the rising sun, on grass that was mowed just the previous evening. I paused to admire the strangely distorted silhouette which the plane cast onto the grass beyond it. The crispness of the airplane's shadow was amplified by the sparkling diamonds of dew all around its edges. If I had my camera, I could have taken a picture of that scene and returned home with proof that I'd had a lovely morning.

My plans called for me to make a quick trip to Middlesex for a Sunday breakfast and then return home for a special holiday- edition honeydo list, but gee, the weather sure was nice. The fate of the day's plans was sealed as I took off from the hilltop and skimmed above the fog that filled the valley right up to the foot of the runway. I Watched my shadow float within the fog just below, and marveled at the texture of the sunlit forests on the hillsides at the fog's far shore.

As I climbed unto the cool clear air, I watched the sights of a beautiful morning unfold beyond every window of the airplane. I wanted to go here, or there, or that- a- way, but all I could do was sigh; I couldn't go everywhere, and any direction was just as inviting as any other. I was frustrated that amidst such beauty I couldn't feel it, smell it, or drink it. I couldn't wrap my arms around it, to hug and hold it forever. The best I could do was to fly onward, over the ridges and valleys that stretched ahead forever, and acknowledge that some days are just too lovely be bound by plans made the night before.

I wasn't the first customer at the airport café, but I was the first to take a table on the porch, overlooking the meadow where we land and take off. The temperature was just climbing out of the forties, but there was no wind and the sun was warm on my dark jacket. I sat with a cup of coffee listening to the birds and the soft music playing. There were things I really wanted to do at home, but they would have to wait their turn; fun jobs brighten average days, but can add nothing to a day such as this.

Friends came and friends went. I passed two hours on the sunny porch, just visiting. One fellow had an airplane part for me to deliver to Larry in Tyrone, and another said "Hey... I owe Larry two dollars from yesterday... give this to him too". Coffee time eventually yielded to the paying customers as the morning pace picked up, and I took off and headed south. I was contemplating a stop in Avoca for "dessert" until I realized that my wallet gauge read "E".

I settled for a circuitous route to Larry's airstrip, stayed low, and slowed the plane way down. I wanted to gather as much of the morning as I could, and time was no longer a concern. What is the sense of speeding through the sort of perfection that comes so infrequently?

Landing at Middlesex had not interrupted the flow of a tranquil morning, and neither did the stop at Larry's. The day was quite well along by now, and as I walked from my airplane I marveled that the loudest noise around was the swish of my feet in the grass. When I entered his hangar I was greeted by the bright yellow shine of fresh paint on the Piper Cub that he is restoring. The sun had warmed the chill of the night from the hangar, and the bouquet of the fresh paint was rising from the plane's taut and straight fabric.

Larry has built one airplane from scratch, and the Cub is the third airplane that he has restored. I admired the Cub as I made a slow circle around it. His hangar is filled with neat stuff... stuff that is so neat that he is tho only one who knows what the stuff is, how it works, and where it goes. I had hoped that someday I could do the things he does, but I'll never get that far... It is a feeling that is as frustrating as not being able to "touch" a pretty day. Leaving, I smiled at the Aeronca fuselage in the rafters, waiting its turn for restoration after the Cub or the Funk is completed.

I dawdled my way home from Larry's, stopping at Painted Post, and spending some time visiting at my "home" airport after parking my plane. My short hop out and back for breakfast had stretched to seven hours by the time I returned to the house. My wife knows aviation weather well enough to sense days when plans will be ruined, and she extended me her full sympathy and understanding.

It was truly a perfect day, something which requires more than wooded hills, foggy valleys and a warm sun above cool, crisp, and calm air. 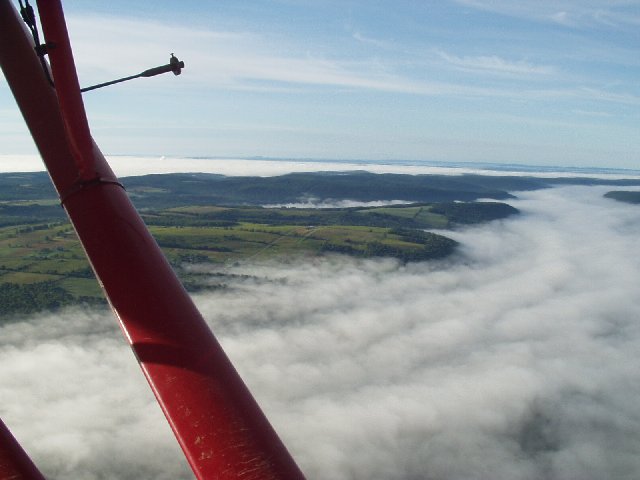 The building near the center of the picture is the hangar at my "home" airport. The runway is the shorter of the two lines which come down from the top of the hill; the longer line is the town road. This view is to the south, looking down the valley which carries NYS 414 from Watkins Glen to Corning, and the hamlet of Beaver Dams would be visible in the foreground if not for the fog. The fog running accross the the picture in the distance is filling the Chemung River valley from Corning to Elmira... and much further on each end.

This picture was taken in August of 2003, yet it is almost a duplicate of the day of the story. Valley fog is a way of life here. 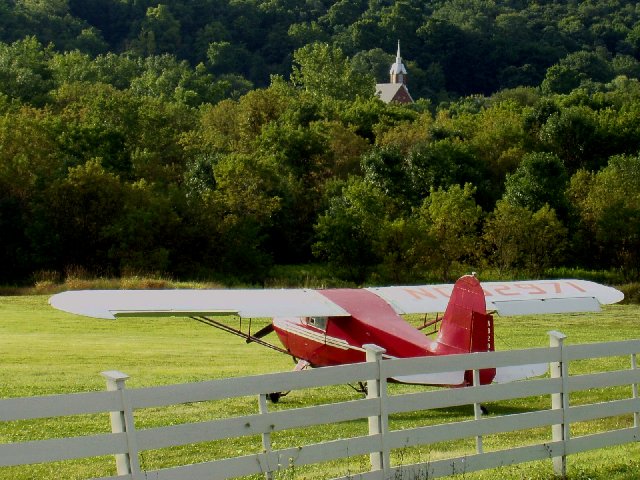 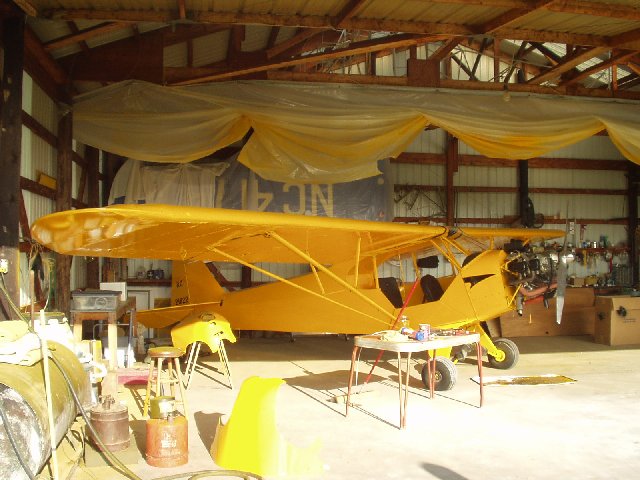 A late June picture of Larry's playhouse. The 1938 Cub dominates this picture, but a wing from the Funk hangs on the back wall, and the thin white steel tubes of the Aeronca fuselage are barely visible up in the rafters.