I have no knowledge of classical music, which is one reason I like to listen to it while I relax. "Big band" music is much the same; I don't associate or identify it with anything in particular. Oldies though, always take me on trips back to some place or to some person, and they often distract me. When I want to take a nap, nothing smooths the wrinkles and soothes the brain like the precise orchestration of the classics.

I was feeling very soothed last Thursday morning. I was stretched across the seats of the airplane, parked on the freight ramp at Rochester. The soft music played in my headset and the warm rays of the day's brand new sun mingled with the cool morning air that drifted through the open door. I was feeling quite content as I drifted off for my third catnap since starting work twelve hours earlier.

This will be part of my routine for four nights a week until August, and I have decided to call it my summer vacation. I will fly from Elmira to Rochester and watch the sun set. After an hour and a half I will leave for Newark and nap there for a few hours in a dark room full of recliner chairs and other sleeping pilots. Just as first light breaks the northeast horizon, I will leave for Rochester and watch the dawn gradually overtake me as I fly along. After another hour and a half layover, the final leg of the work shift will return me to Elmira.

Deep inside I have felt guilty about my regular assignment of Elmira to Rochester and back. In bad weather the route can be as challenging as any, and in good weather it is as beautiful as any. The problem was that it had no romance. It was too much like being paid to sleep in another city each night, and "...Oh, by the way... as long as you are going there, would you take along a load of freight?"

At the tender age of fifty- two I cut my teeth on the run from Elmira to Newark, and was disappointed when it was canceled in favor of the shorter run to Syracuse or Rochester. I really enjoy sitting in the airplane and watching the lights of the next city come into view, or watching the next change in the weather, or just hearing the different chatter on each frequency as I pass through different sectors. I like to sit in the plane and watch the world go by; it costs me money to do this in my own plane, but I get paid to do it in the company plane.

Last week was the beginning of the new schedule and it was as enjoyable as I had hoped. On one night the full moon rose in my windshield for an hour as I flew to the dog- leg turn I make near the Pocono Speedway. I rode along listening to Hank Sr. as the big yellow moon moved skyward, shrinking but brightening. On another night, most of that leg was flown in snow and clouds at 9000 feet until I abruptly popped into the clear, with the lights of Wilkes- Barre and Scranton ahead in the distance.

After turning near Pocono I am flying directly towards Newark, and sometimes I can see the floodlights of the freight ramp from there, 70 miles away. This is part of the slow- speed "Penns 1" arrival route which lays directly below the "Willliamsport 1" arrival used by big jets. I can often watch them appear in the top of my windshield and gradually shrink towards the horizon just as another one appears above. As we all get closer, we are on the same frequency and on most nights I listen as they are given vectors right or left to line up for landing to the north or south while I am told to keep coming straight ahead to land to the east.

I remember many nights when an airliner would overtake me near the Delaware Water Gap, yet I would beat him to the parking gate, taxiing in front of him as he moved across the airport to the passenger terminal. I smile, not because I got there first, but because I had more fun getting there.

Dawn is always an inspiring time of the day, and I was treated to a particularly beautiful cloudscape last Thursday morning. I thought it would be a dull flight because the sky was clear, but there was a raft of puffy clouds at my altitude just west of Seneca Lake. These clouds were the only obstruction between me and the first rays of sun that slide horizontally across the sky in shades of red, orange, and yellow. The clouds were backlit with the bright colors of dawn, and lit up as though they held a fire of their own. I was fortunate to get pictures of them as souvenirs.

There are so many contrasts in the ninety minute trip. One end is in the city and the other end is in the country, and the weather usually makes some sort of transition as well. The solitary flight is joined in Newark by other company planes and their solitary pilots; Half a dozen of us arrive from all over right about midnight. We greet each other with a few familiar jokes and retire for a quick nap in the pilot room.

So this year, I will do a lot of flying and go to Newark for summer vacation. I'll pack some extra clothes and carry some snacks in a small cooler. I always have a note pad and a camera, so more stories from the big city are likely, and by the time that this column is posted on bobtilden.com, I am certain to have several vacation photos to pass around. 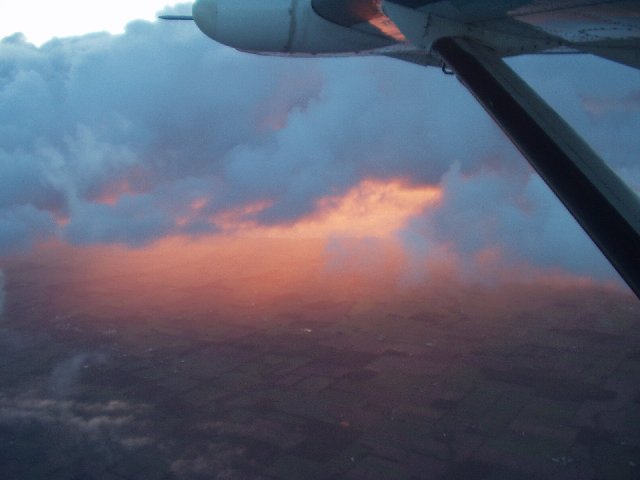 I took several picutres of this cloud formation as I flew along west of Seneca Lake; this picture was the best stand- alone example. The cloud in the foreground is the only cloud in the sky between the sunrise on the northeast horizon and me. It is backlit with red colors of dawn which are trying to work their way through and around it. As I flew along and watched the colors and the cloud change, it seemed as though the far side of the cloud was on fire, and the fire was eating its way through. 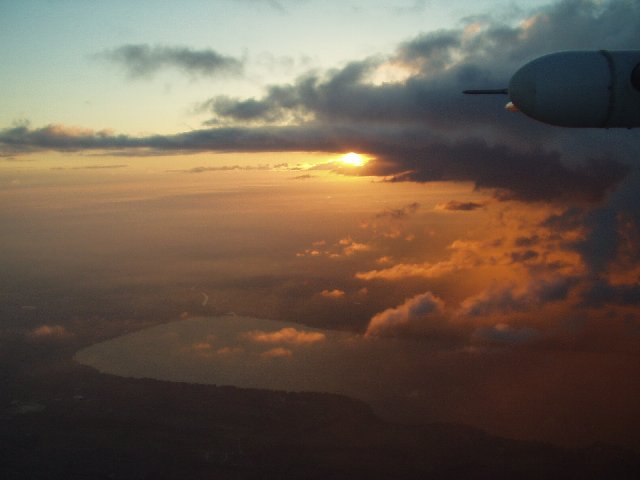 This was the grand finale. Finally the sun is up over the horizon just as I cleared the end of the clouds. The north end of Seneca Lake is in the background. 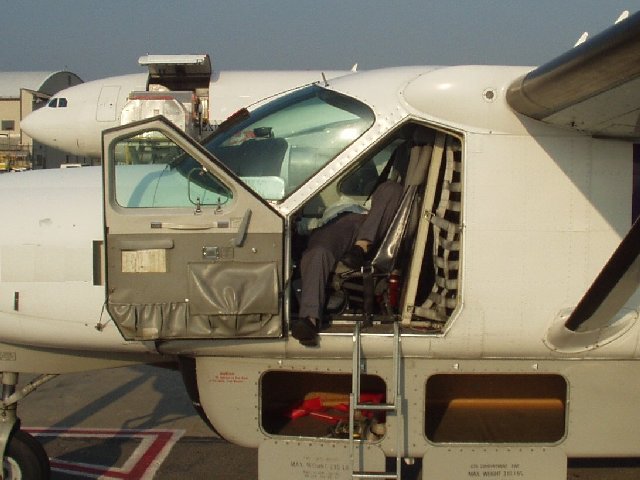 Perhaps I should title this as the grand finale, but it is not me that is laying across the seats, and it was taken several days later. The two previous pictures show the glories and glamour of flight, this picture shows the seamy underside of long overnight schedules. One of the other pilots is grabbing a half hour catnap, laying across the seats of his plane just as I was doing at the start of this story. It is sleep, but it is fitful and uncomfortable.