The fun was pretty much done, and I sat sprawled across the seat of my little plane, in T shirt, cutoff jeans, and bare feet. My left foot extended between the rudder pedals, and my right foot was up on the far corner of the instrument panel. My right elbow rested on my leg, and that hand held a map that I was using to shade my eyes from the sun as it drew lower in the western sky.

I certainly was no coiled snake ready to spring into action, but on the other hand there wasn't a lot to do. I watched for traffic, made an occasional sweep past the engine gauges, and kept the 310 degree heading that would take me home on this last leg of a five hour flight. The visibility was excellent, but the low sun ahead of me lit up the little bit of haze that was in the air and obscured the finer details of the view out the windshield.

I was returning from an overnight flight to Long Island, my first such trip in 10 years and the second in more than 25 years. I was apprehensive because my plane has no radio equipment, and people down there sometimes have such a different view of aviation. I was afraid that even though I was perfectly legal and proper, that I would be put through a wringer because my plane was so "different". My last flight to Long Island was disheartening.

Happily, I selected a "different" airport this time, and landed at the Bayport Aerodrome, just a few miles southeast of Islip. It is a well- kept grass strip that is home to more than two dozen little airplanes, many of them older than my plane. It was as friendly and tranquil as any rural airport I have ever visited, and a narrow border of woods made it difficult to believe that it is surrounded by closely- spaced homes.

Maybe the most interesting aspect of the place is that it is a "neighborhood" airport. A nondescript residential street narrows abruptly as it enters the woods, and shortly it opens into a small parking lot. An unlocked gate in a waist- high fence separates the lot from the airport, and all are welcome. I saw several mothers having a picnic lunch in a shady spot with their children, who were enjoying the airplanes as they came and went. It is so refreshing to see, of only for a moment, how the world of aviation should be.

I flew down on Sunday, after an uncertain forecast had turned to good. The problem had been the passage of a cold front, which turned out to be so benign that it was marked only with a few clouds and a wind shift that brought lots of clear air on light northerly winds. Monday, behind the front, was a perfect day for a flight "out east" that I had wanted to make for thirty years.

I departed Bayport and headed east for an hour, flying low along Long Island's beautiful barrier beaches. Even with fifty mile visibility, the line of almost- deserted surf and sand stretched as far as I could see. In the smooth air the plane almost flew itself, and I sat like a kid in the window, watching the waves wash the beaches, looking at the sandy dunes that make up the body of the barrier islands, and admiring the variety of Great South Bay. With its fertile soil, abundant moisture, tempered climate, and endless interface with the ocean tides, the Long Island of centuries past must have been about as close to easy living as one could get.

The quiet and isolation was suspended for a few miles as I passed the Hamptons, but resumed quickly as I continued to the eastern tip at Montauk Point. As Long Island's easternmost tip slid below my wing, I was tempted to continue towards Block Island which stood in plain sight only fifteen miles distant. Perhaps next time I will have that opportunity, but this time I turned northeast and took the picture of "Long Island from Montauk" I had always wanted to take.

Gardiner's Island lies in between the two forks at the east end of Long Island, and for a long time I have wanted to take a peek at it. It is a domain that was granted to the Gardiner family by King Charles I of England in the year 1639, and has remained in the family since that time. There is a manor house, thick woods, open meadows, fresh ponds, and tidal marshes and basins. It is little influenced by man's hand.

I continued on to Orient Point, the tip of the northern fork, and took a picture of Long Island's north shore as it stretched to the western horizon. I took another picture to the east, with Plum Island in the foreground and the Gull Islands making a line towards Fisher Island and the barrier beaches of Rhode Island to the northeast.

My final picture was of the Connecticut shoreline from Orient Point. This marked the end of the sightseeing flight and the start of the trip home. I knew there were more sights to see because I planned to follow the Upper Delaware River from Port Jervis to Hancock, but the crossing of Long Island Sound marked my departure.

As I lounged sideways in my airplane, clicking off the familiar landmarks of home territory, I mused about all the things I had seen on my eight hour round trip. I have the opportunity to make only one or two of these flights per year, and these precious moments invariably create an array of lasting impressions. The view from the airplane so often answers one question only to pose yet another; the sights pique my curiosity and draw me into them. I guess that's what keeps me hooked. 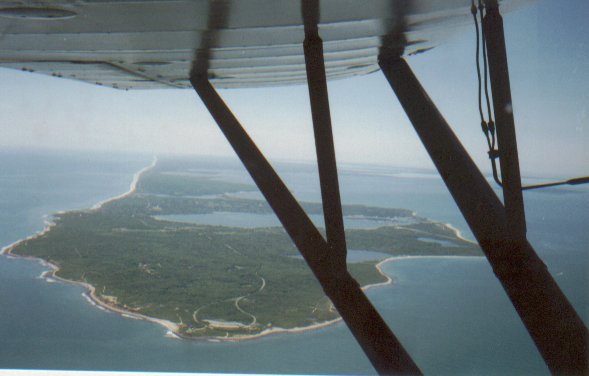 This is the picture of "Long Island from Montauk" that I had wanted to take for so many years, however it is neither the first nor last time that this scene has been photographed. To me, the wing struts in the foreground create a sense of place and moment; they are unmistakably the struts of my airplane, and I was there to enjoy such a sight on that beautiful day. 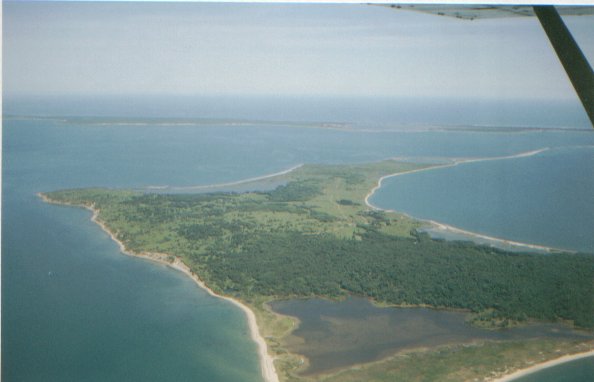 It is hard to take a good documentary style picture with a cheap camera from the side window of an airplane, but this is pretty fair. It is of Gardiner's Island, and shows the large tidal pond at the north end, and the woods beyond. The manor house is at the right- center of the island, south of the woods and at the end of the sandy road that is barely visible coming up from the southern tip. In earlier times the island was also home to the manor staff and their families, and the island was largely self- sufficient in terms of day- to- day items. Nothing was visible of those activities. 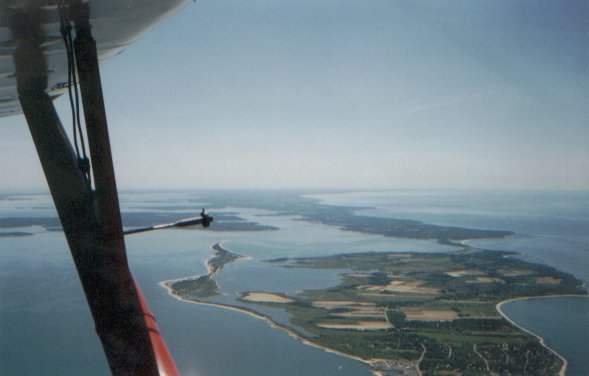