I would have to say that the delights of flight were at a low ebb last week. There was nothing scary or troublesome, but there was nothing much to counter- balance two sleepless nights caused by weather delays into the City. A friend and I had planned to meet at a Saturday breakfast in Cooperstown, but the forecast of good weather did not come true. I tried to cheer myself with a shorter flight to Avoca as a consolation, but was turned back by rain, mist, and low clouds.

Sunday, the first day of summer, dawned clear and crisp. It was a refreshing day more appropriate for the first day of autumn. I could have flown anywhere and had a wonderful view of the earth and the sky, but all that my morning would allow was a trip over the hill to the breakfast at Painted Post. It was a good flight and a good visit, but too little of both.

Sunday evening rolled around and I exercised my Father's Day prerogative of a sunset flight. I don't get to make low- and- slow evening flights all that often, even though they usually offer the best sight-seeing. I thought I would go to Hopewell and re-take several pictures that the computer recently lost, but I didn't have quite enough time to complete the round- trip before dark.

I wandered up to Penn Yan, across Dundee to Seneca, and then southwest to Monterey, before crossing east over Hornby en route home. It was peaceful and relaxing, but I thought it had fallen short of my goal. I was looking for some sort of inspiration, something to but a little up-tick at the end of a flat week.

As I drove home, just after leaving the airport, a doodle-bug turned onto the road ahead of me at an intersection, and then stopped at the house on the corner. I stopped beyond it, and got out of my car, camera in hand. I asked the driver if I could take a picture of him and his machine, and he consented after a brief exchange of good natured humor; I suspect that the conversation was his way of verifying that I wasn't from "the Government".

The term "doodle-bug" refers to a wide range of homemade farm tractors that were built in the 1930s or so. Most of them were created from modified cars or trucks, and they represent a level of ingenuity that has been all but smothered by our present lifestyles. This particular doodle- bug was based upon a late 1920s model A drive train, and had a hydraulic manure scoop on its back end.

Farmers were our nation's pool of back-yard engineers, their talents rising naturally from their need for machinery which matched their particular needs and budget. "Waste not, want not" was an expression which applied to more than just food and clothing, but to machinery as well. Good parts from a broken machine parked in a hedgerow could keep another machine in repair, or be used to create something else entirely.

As I continued my drive home, I realized that the most interesting scenery of my flight had been the patterns of our land's cultivation... the work of our farmers. The low sun had set the small furrows of freshly fitted fields into sharp relief, and revealed their graceful drapes of hummocks and swales. The patterns of newly emerging crops stood out clearly.

Freshly cut hay laid in long lines across some fields, and other hayfields had their smooth-shaven surface broken by shadows cast behind the new bales that were awaiting pick-up. Sloping fields were often broken into contours, with different crops in rotation among the sections, and each crop offering a different color or texture to the eye. Even in the woods, the patterns of reforested trees took on the texture of broad swaths of corduroy.

It was a pleasure to view the miracle that our farmers have produced for us over these past few weeks of spring... and over the last few hundreds of years. An otherwise dull and disappointing week of flying was redeemed. 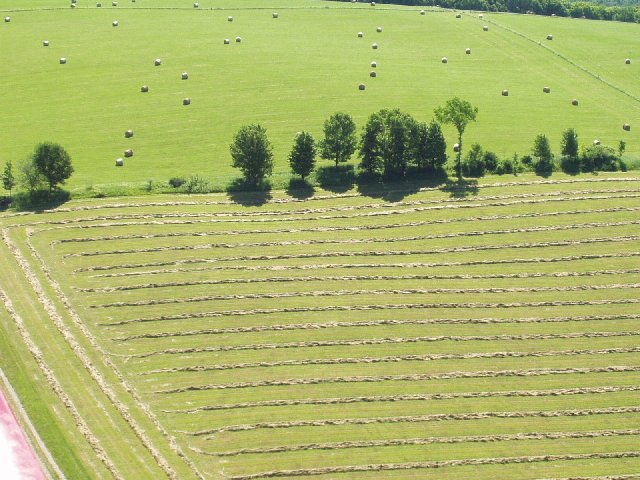 Just south of the airport, on the next hilltop, I passed these hayfields on the return from my morning flight; one has been baled for about a week, and the other is almost ready to bale. 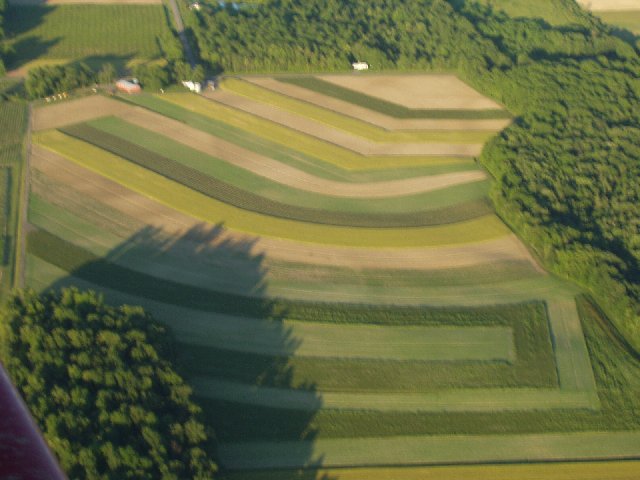 Contours south of Penn Yan. Year after year, season after season, I have marveled at this field, and a few sharp readers will recognize it as the same field which was pictured in National Geographic Magazine several years ago. 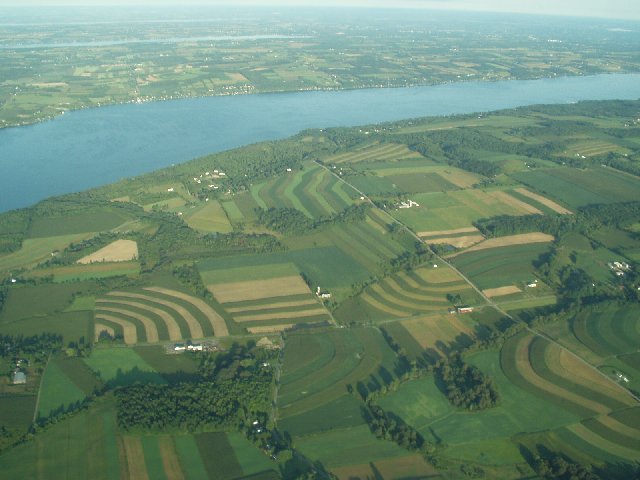 This picture was taken southeast of Syracuse in August 2003. It looks to the west, and it is my recollection that Otisco Lake is the closest of the lakes, folloowed by Skanateles and Owasco. 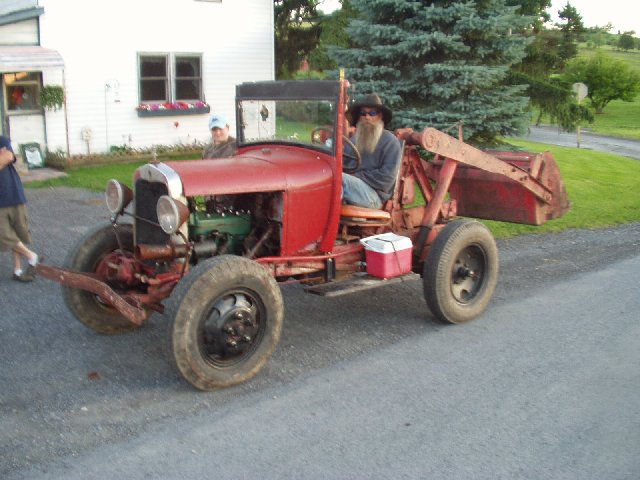 This is the doodlebug and its driver. 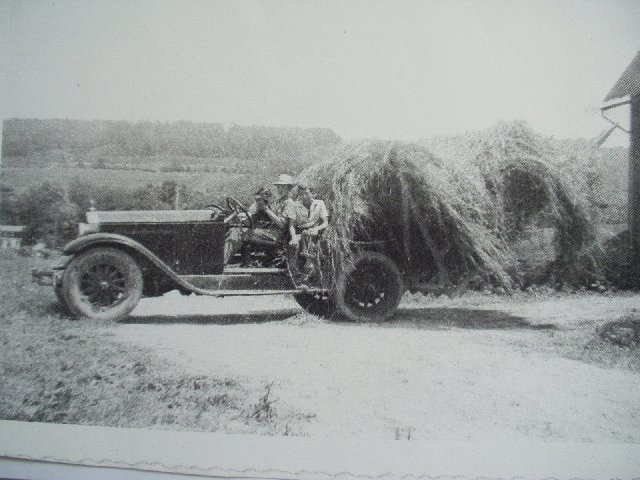 A Doodlebug in action... I received this photo at a family reunion in August of 2006. It is a "buck rake" at work on the Hayes dairy farm on the hill just east of Montour Falls NY in 1944.

The design and construction was a collaboration between the Hayes brothers and Mark Martin, a local farmer who had a flair for tinkering, on Skyline Road, just south of Burdett. It is based on the chassis of what was then considered "an old Buick"