I would hate to think of this conversation as being the highlight of my Saturday, and fortunately it wasn't. There were several of us sitting at a table overlooking the runway at Cooperstown, watching the planes come and go. For the most part, the planes were the wholesome old taildragger types because this fly-in always offers a free breakfast to all pilots who arrive in a vintage airplane. A free meal does a good job of bringing out us wholesome old types.

A big Waco bi-plane had just landed, and conversation had lapsed while each of us admired the smooth flowing classic lines of a rare airplane. We listened raptly to the deep purring rumble of its radial engine. It had fresh fabric and paint, and stole the show as the first glints of sun broke through the low clouds overhead. The plane taxied to our left and disappeared behind the crowd, which included a tall young woman who also had smooth flowing classic lines. On a leash, she was holding the aforementioned dog.

A short conversation followed, and it was decided that the dog was about all we could handle; scratch it behind the ear and it would lay down next to the recliner with a sigh while we took a nap. Just a few generations ago, when flying was new and pilots were young and adventurous, old- pilot humor was not nearly as rampant.

It was very much a day for old pilots though. Over the years I have noticed that the percentage of tailwheel airplanes at a fly-in increases dramatically as the ceiling and visibility drop. Part of the reason is that the older planes are slower, and pilots have an easier time picking their way across a misty landscape. Another factor relates to the experience level, and the fact that many of the old slow pilots have been picking their way around their local area for decades.

When I left home, the weather was good, and forecast to remain that way until late afternoon. By the time I crossed Route 81 though, there were quite a few clouds below me. The clouds became thicker as I headed east, until they finally knit into a solid undercast ten miles short of Cooperstown. I back- tracked to a point where I could descend through a hole in the clouds, and proceeded to follow the valleys south and east, zig-zagging my way to the airport.

All of the others had to do the same thing, and one of the guys was telling how there was a big hole in the clouds below, and that all he could see was water. He laughed as he said "I knew it was Schuyler Lake (more properly Canadarago Lake) because of the island in it". From there it was a simple matter of following route 28 to Milford and then up Cherry Valley to the airport in Westfield. Familiarity with the terrain is far more valuable than all the other "informational resources" that can be purchased at any price.

Older guys can often afford to wait out weather problems better than younger pilots, but the biggest factor, I think, is that "scud- running" is not taught to new pilots. At this point in time a it is almost a taboo to talk of such a thing. Recently I read a letter to the editor of a glossy- paper magazine, concerning an earlier article about visual flying in poor weather; it scolded the magazine for "encouraging recklessness...".

I had started the day with no enthusiasm for anything, and went to Cooperstown because I had promised another Commonwealth owner that I would meet him there. As I flew home though I was reinvigorated, and I marveled at this wonderful mode of travel. I had wiggled around through some murky sky to get to the airport, but those ten minutes were a lot less stressful than traveling ten minutes on a crowded four- lane. I even found myself singing, something few people can muster when half- lost in traffic on a strange highway.

In all, I had a wonderful morning. I had the chance to gaze idly down upon our rolling hills and a rolling cloudscape as well. I stretched the plane's legs a bit with a flight that was longer than the usual, and met up with a mix of old friends and new ones. I was reassured to discover such a vibrant airport as Cooperstown tucked into a rural valley.

It was quite a morning for the old dogs, and it made me proud to see so many planes lined up in a row, all sitting back comfortably on their tail ends. Some of them were shiny and well groomed, and some others simply looked well exercised. Possessing the wisdom of the years, they sat patiently, waiting to ramble back across the hills and valleys to home again, and understanding the futility of trying to keep up with the younger critters. 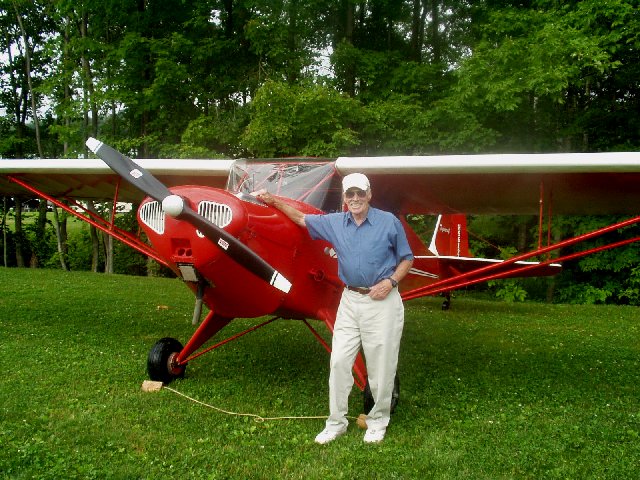 The old dog himself, Wilbur the Iron Man. Wilbur has been flying longer than seventy five percent of the earth's population has been walking.

There is a story about him in the Gone Flyin' book, read it through this link.