Saturday evening found me contentedly polishing the propeller on my airplane. I stopped for a moment and gazed at the sun that was setting in the northwest, and admired the splendid view from the hilltop airport. I listened to the day's last scattered songs of the meadow birds, and wondered through it all what has changed?

I had never in my life polished a propeller, and never before could I have imagined doing such a thing happily. In five years I have only washed the plane four times because I know that a dirty plane flies as about as well as a shiny one. Life is so much simpler when appearances are not a big priority.

I have been flying more this summer though, and I recall two times in the last few weeks that I found myself thinking that the plane really should look nicer. Two weeks ago I went out to Bob Dart's airport at the west end of Chatauqua Lake so that my plane, a 1946 Commonwealth, could visit with a few of its siblings. We were able to park three of them into a close echelon formation for a photograph, and I felt that I really hadn't groomed the plane in a manner appropriate for the occasion.

Three airplanes of a type are not usually a strange sight, but there were only 300 or so of these planes built, and it is a good guess that there are only thirty or so still flying. They were planes that were too fancy to sell in the quantities that Piper sold its Cubs, and to sum up a number of slight imperfections, they were not quite as versatile. Just as in any of the industries, there are only a few companies that survive, and all the rest fade away as footnotes or as "interesting stories".

A few lucky airplanes carry on through the years though, and make interesting stories for their owners month after month. In the middle of June I took a picture of our State's eastern tip at Montauk Point, and just two weeks later I took a picture of its western extreme at Lake Erie. Saturday morning I parked the company airplane at its spot at the Elmira Airport and hastened up the hill to my airplane so that I could make the short hop over to Middlesex for breakfast.

I sat at a shaded table on the porch that overlooks the wide grassy swath of runway and watched the planes come and go. It was a gorgeous day, sunny but cool, and the air was clear and still. Planes would drone overhead, reduce their power, and circle down for landing. Other planes would start up, weave through the array of scatter- parked planes, and taxi to the far end of the runway for takeoff. Each would roar past with a wave or a wiggle of the wings, climb out of the valley and head its way home.

One of the local planes caught my eye though. I know that this airplane is no princess, but it was clean and neat, and as its engine shut down the fresh bright shine of the propeller seized my attention. I have to believe that this sighting is what started the slow- turning wheels of thought that drew me back to my airplane that evening.

The next morning, Sunday, I went to Cherry Ridge Airport near Honesdale PA, just over 100 miles away. The plane required almost three hours to make the somewhat roundabout round trip, just as it would have if it were dirty. I received an immediate reward for a clean airplane when a fellow walked up to me and said that he had once owned a Commonwealth, and wanted to look at mine just for old times sake. I didn't have to make apologies for the evidence of the hangar birds that roost over my airplane.

Cherry Ridge has an airport restaurant which is open for breakfast, lunch, and weekend suppers at this time of the year. It is small and folksy, with ten or so tables and a counter. It sits on a rise adjacent to the runway, and large windows afford an excellent view of everything that goes on. It is a dream destination for old pilots who get good vibrations from old planes.

The trip home was very direct. Rather than follow roads and rivers, I cut cross- lots with just a compass heading and the anticipation of finding the Susquehanna river near Tioga Center in about half an hour. As I droned over the hill- country farms of northern Pennsylvania, I pondered a fear-monger's recent pronouncement that planes like mine- and people like me- are a "gun pointed at the very heart of America's domestic security".

From my altitude, high enough that the world looked perfect, but not so high that I lost the detail of its countless nooks and crannies, I looked hard for something that would be worth threatening. I could see hundreds of square miles, only the tiniest fraction of this huge earth, and the only target I could imagine was the minds of the people below; an easy task with a news media that stresses shock over substance.

The reality that nobody dares to report is that "life goes on". Every life is touched with sorrow or tragedy, and ends with death, usually of a normal sort. In between there is plenty of time for little victories and simple joys. Irrational fears are easily kept at bay by staying active, even if only to shine a propeller. 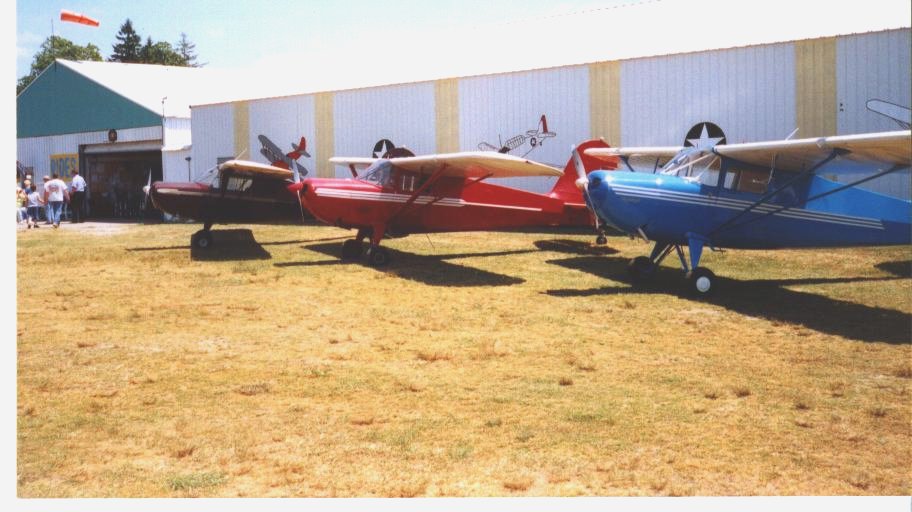