I really wanted to write something about airport security and the fate of our species this week, but fun got in the way again. I hope that the planet holds together through another week of bureaucratic bumbling, as a fortune is dissipated trying to deliver the unattainable. Rather than playing to ignorant fears, true leaders would forthrightly state that travel is safer than it has ever been, and there is no abrupt change in procedures that will produce anything more than confusion.

For better or worse, aviation has always been regarded differently than other forms of transportation or recreation. Given this mystique, I'm sure that some people would regard it as scandalous that when I took off last Sunday morning, I didn't know where I was going. Even though I had been out of bed for an hour, I still hadn't made up my mind where to go. There were seven choices under consideration, and three of them required an initial heading to the northeast. I found myself heading that way.

I decided that I would fly to Greene, NY, northeast of Binghamton. The kicker was that I could continue on to the White Birch Airport near Hancock if nothing at Greene interested me. Both destinations required that I either swing wide around Elmira's approach corridor or that I fly down Cayuta's narrow valley low enough that I would be of nobody's concern.

On this calm and cloudless morning I chose to swing wide, and went to Cayuta Lake before setting a course direct to Greene. Using the lake as the starting point for the trip also kept my straight- line course far enough from Binghamton's airspace. As I crossed over the thickly wooded hills east of the lake, I pinched a crease in my map from there to Greene, and quickly settled into the routine of fly'in. I sat contentedly and watched the landmarks slide past, and made sure that the compass and altimeter stayed sort of where they belonged.

It took almost an hour to reach Greene, and looking down at it, I suspected that I would find something to eat after a short walk down to the main road. Moreover, it looked friendly. The runway is a particularly wide stretch of grass, next to a corn field, footing a river, and running past a nice house with a pretty garden. I brought the engine back to idle and glided around for the landing.

Walking through a neighborhood that you have just "dropped into" always offers such interesting slices and snippets of life. A young boy rode a 4- wheeler, a man worked in his garage, and a chainsaw could be heard working in the woods. The corn was freshly tasseled and fragrant, birds sang, and an occasional dog would dutifully announce my passage. Morning is the springtime of the day, and the cool of the night hadn't fully been banished by the strengthening sun. Quiet little zephyrs would alternately bring me warm air from the ground or cool air from the woods as I walked along. All was well in this little part of the world.

I arrived at the main road, to find nothing but a "stop- and- rob" convenience mart as a breakfast choice. Initially I was cool to the idea of eating a breakfast sandwich along the curbside when an inspiration struck. I bought two sausage muffins from the rotating display rack (even the handwriting on the label was fake), a cola, and a creme doughnut for a picnic by the river.

Returning to the plane, I taxied to the north end of the runway and parked in a corner, creating quite a pretty picture of the plane in the grass with the woods and the lazy mid- summer Chenango River in the background. From the runway there was a path past a flat- bottomed tin boat to the river, and I found a choice rock on the shady river bank for my picnic spot. It was so wonderful that even my wife would have endured the flight for the chance to sit there.

Initially I thought that the still river would be my only company, but soon the occupants of this neighborhood began to announce themselves. Maybe it was the catbird that spoke up first, boldly babbling from the far shoreline. Shortly I heard a splash and turned to see a kingfisher fly into the woods, trailing his raucous call behind him. A Blue Heron landed silently and stood like a statue, peering into the shallow water. There were others too, water spiders, an occasional fish flop, lots of other birds, and a fisherman drifting down the river.

As I sat, the morning grew older and the cicadas started to sing in the treetops. Down in the shade next to the river it was still cool, but I knew it was time to move on. I walked to my plane, started it up, checked for traffic, and took off.

Nobody would have thought twice about a fellow taking an aimless Sunday morning ride like this on a motorcycle. Believe it or not, it is just as natural and normal to do it in an airplane too. 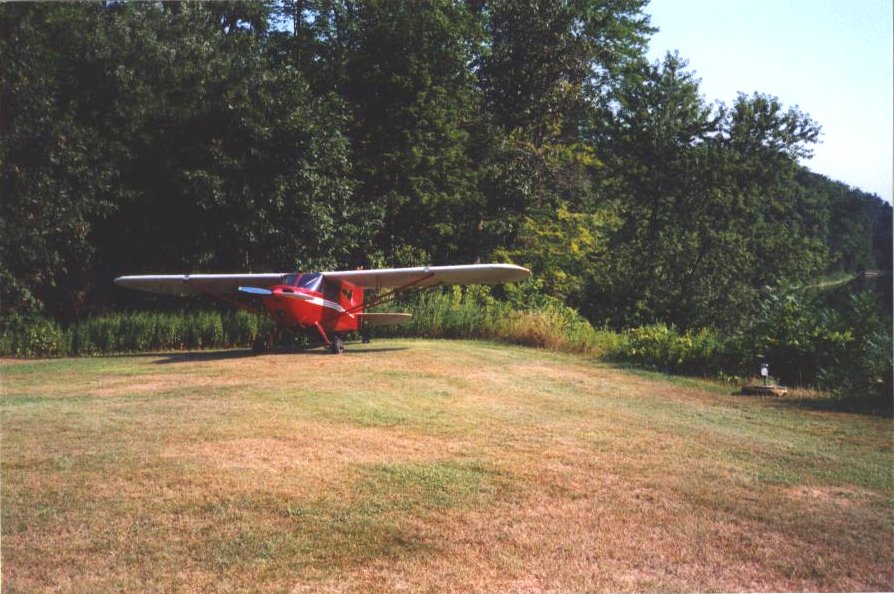 The plane parked at the northwest corner of the runway. The river is just visible to the right of the plane. 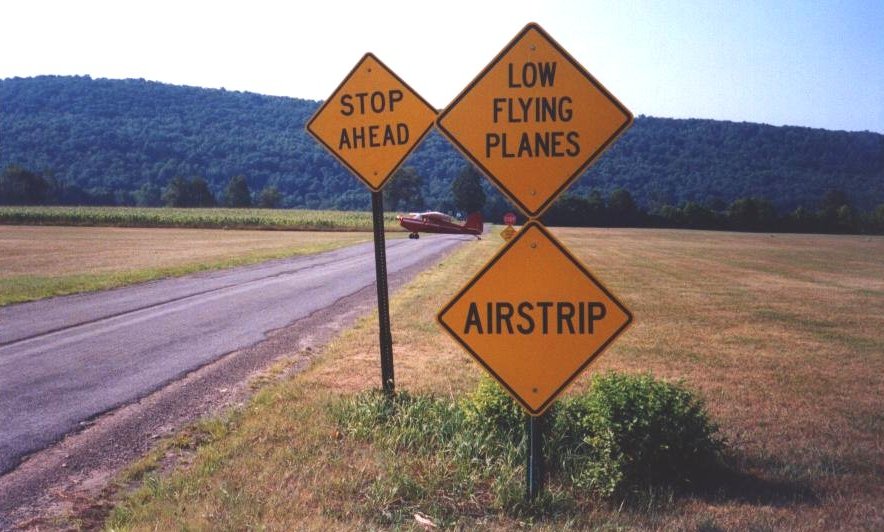 This is life as it should be. A lightly used road and a lightly used runway both need the same piece of ground. Lo and behold, it is possible for responsible adults to share it! This is the north end of the runay at Greene... and this is also photographic proof that my tires have rolled upon pavement!
Plane Talk Archives
Return to Home Page
E- mail Bob Tilden at rdtilden@yahoo.com