Last week started out a lot like summertime. It was hazy and uncomfortably warm even well after dark. As I climbed away from Rochester, I met a lazy egg- shaped 3/4 moon as it rose above some clouds that were off to the east. It cast a friendly glow of oranges and yellows through the haze and cloud tops, and seemed to have the "come hither" lure of a candle flame.

I thought whimsically and romantically of "the August Moon" but then I wondered "so what??" I couldn't connect the thought of an August moon to anything much at all. Figuratively, I shrugged my shoulders and flew along, watching the moon rise higher and turn whiter until it disappeared behind high clouds in eastern Pennsylvania.

My first surprise was how far I could push the power lever before the turbine temperature got too high. The cool air allowed the engine to produce more power, and it gave the propeller and the wings something much more substantial to work with too. A Cessna Caravan will never be an F16, but neither was I working the same old plow- horse I had become accustomed to.

I knew that the air temperatures en route to Newark would be below freezing at 9000 feet, but I expected that the clouds would have dissipated after sundown. As I neared cruising altitude, I flew into clouds, and the plane started to accumulate a layer of ice. For twenty minutes I sat in awed disbelief as I watched the wings and windshield ice up on an early August night. If it were January, I would have sought an ice- free altitude.

The ice on the wings formed a rough but almost transparent covering because it formed from water droplets that froze while they dribbled backwards. When I shined a light across them they sparkled. Ice also grew thick enough on the light cover in the edge of the wing that light sparkled onto the instrument panel inside the plane. The long pitot tube protrudes from the wing adjacent to the light, and a shimmery layer of ice showed on its stem, too.

All in all, it was a sparkly night, just what should be expected from the air behind a cold front. Once past the lake- effect clouds, the cities of the Susquehanna and Chemung Valleys spread their lights across my path. Just by swinging my head I could see from Binghamton to Corning. Wilkes- Bare and Scranton in the Wyoming Valley cut a bright swath through the sparse hill country lights as I crossed them, and I could see the lights of the Newark Airport from the Pocono Raceway.

The return trip was much the same six hours later. The lights of cities, villages and busy river valleys reached up to me with bright enthusiasm as the eastern sky started to glow. Nearing the Great Lakes I again flew into the clouds and again gathered a coating of ice. As I completed my descent into Rochester I could smell the fresh tang of wintry air entering the cabin of the plane.

I had been looking through the crisp air of autumn and for a fleeting moment reveled in its scent. I had watched the plane ice up just like it was wintertime, and I recalled the snowstorm I had found over Yates and Schuyler Counties in late June. It is mid summer... time for tomatoes and corn, not snow and ice.

I think that the warm and sensual moon earlier in the week was taunting me, saying "here I am, on top of a cloud and across a misty abyss... catch me if you can". Maybe there will be no summer. Maybe the rain will stop only when it turns to snow.

Maybe this summer we have been mooned. 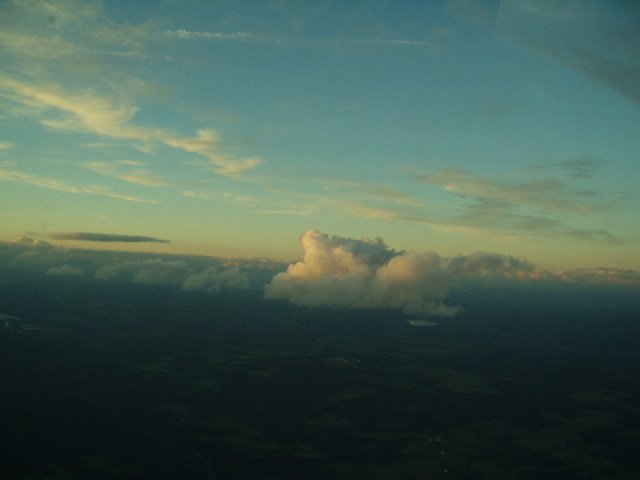 The sun was low as I climbed away from Elmira, and I caught this cloud among others. I thought that the clouds would be completely gone by dark. 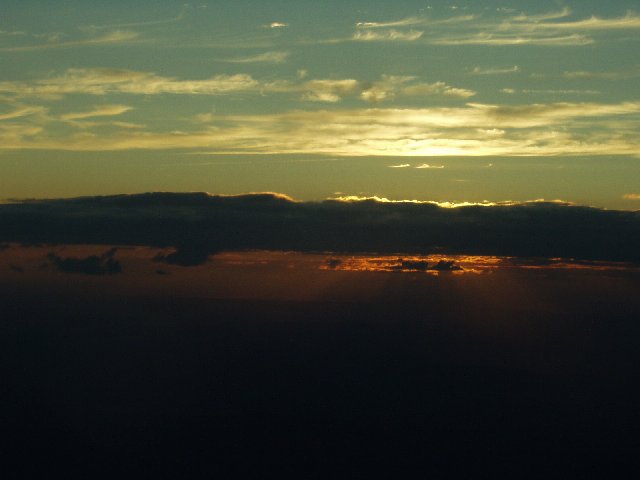 A few minutes later, I took this picture as the sun dropped behind a deck of clouds at the horizon. 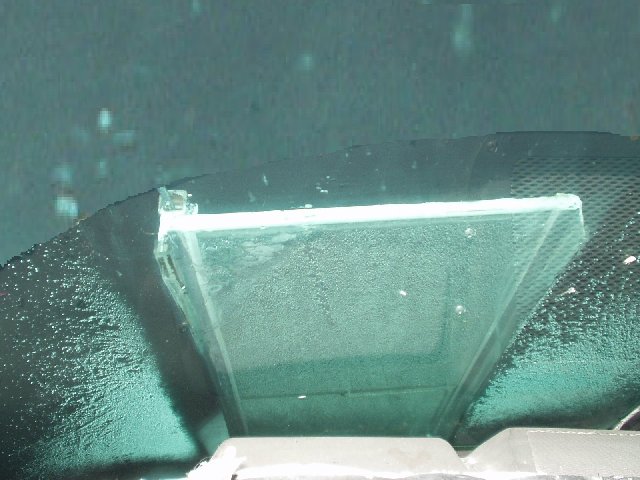 Two hours later, this picture shows the ice that was forming on the windshield and deice plate as I cruised over the Finger Lakes area at 9000 feet. The picture was taken with a strobe light, and I have altered the top part for clarity; originally it showed a reflection of a very tattered glareshield. 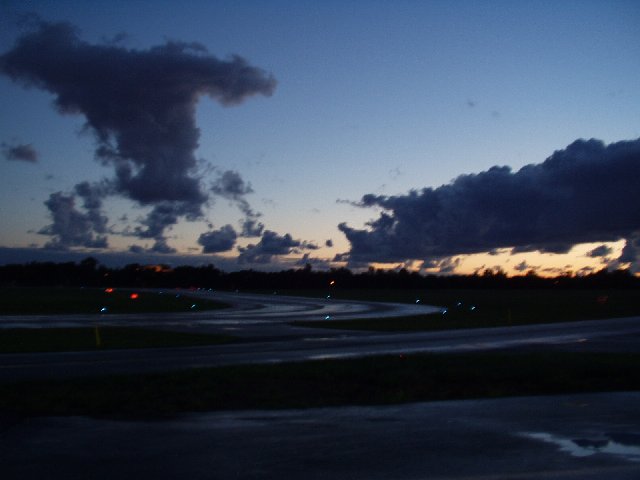 Back on the ground at Rochester at daybreak. The clouds say that a fresh load of cool crisp air has filled behind the cold front. The taxiways show that there have been sporadic rainshowers over night. The entire day that followed had sunshine interspersed with scattered rainshowers spawned by the warm lakes.