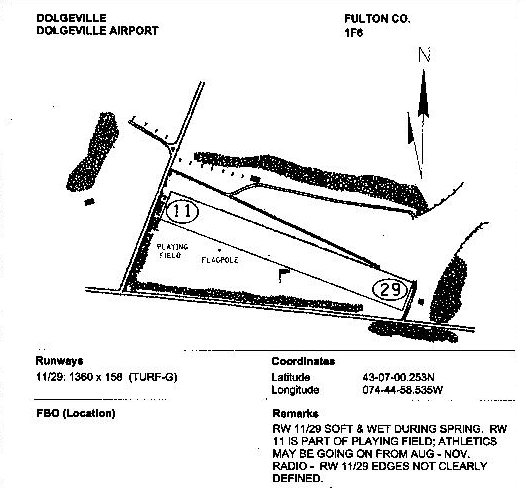 Last week I was intrigued by an entry in the airport directory for Dolgeville , NY: "Runway is part of a playing field. Athletics may be going on from August to November. Runway edges are not clearly defined."

As I read the entry and looked at the airport diagram, I silently wondered if his airport was here on earth, or just another of those marvelous places in heaven. If I could believe what I was reading, This town had something of a recreational park adjacent to it, and flying was considered to be just another form of recreation. It seemed to violate the unwritten law that aircraft operations must take place "somewhere else, inside of tall fences". On a broader scale, it seemed to violate the human propensity to make life more complicated than it needs to be.

Dolgeville (pronounced more like dowlg'ville) is a large village at the southern edge of the Adirondacks, about 25 miles east of Utica. Up on a hill, less than a mile from town is an airport, an open field that is owned by the Dolgeville Athletic Association. Approaching the 1300 foot length of their playing fields for landing, I couldn't help but wonder why a sports group shared their fields with an occasional airplane.

The story goes all the way back to the 1930s when the New York (baseball) Giants would play an exhibition game with another major league team at Dolgeville every autumn. It was a thank- you of sorts to the village that made Adirondack baseball bats. A 600 seat stadium was built for these games, and people came from all over to watch. Since some of the spectators came by airplane, the association received approval to use their field as an airport. The ball games are gone, the Giants are gone, but the airport designation has remained.

In past years there have been several airplanes based there, but presently there are none. Annual traffic seems to be on the order of a few dozen planes a year, except for the military helicopters which sometimes visit for training on dark nights for a few hours at a time. Perhaps the airport's most noteworthy visit was in 1961 when the pilot of a DC-3 freighter won a thousand dollar bet, making a successful landing and takeoff there.

The people who use the field are as accustomed to making room for an occasional airplane as they are accustomed to making room for any of the other users. Among the activities are a large youth soccer league, high school football practice, clam bakes, steer roasts, graduations, receptions, and reunions. The local snowmobile club will be using the field for drag races next weekend.

Sunday was a busy day for me, because it was the first time in my life that I purposefully set aside a full day for doing nothing but flying nowhere. I had breakfast in Dolgeville and walked a short tour of the town. I admired the huge shoe factory below the mill dam on the creek, and was saddened to see that it was now vacant after more than a hundred years. Walking back up the hill, I drank from a strong spring that flows from a pipe at the roadside, and noted that the woods had a sweeter smell than "our" woods. I recalled it as an "Adirondack" smell, but remain unable to determine why it is different.

I landed at two more airports during the day's four hours of flying, and found two more that I want to visit. I spent most of the afternoon at an airport picnic among friends, and returned home ten hours after leaving. Just as I had planned, I spent the whole day with the airplane, but it is hard to say that I had flown "nowhere". 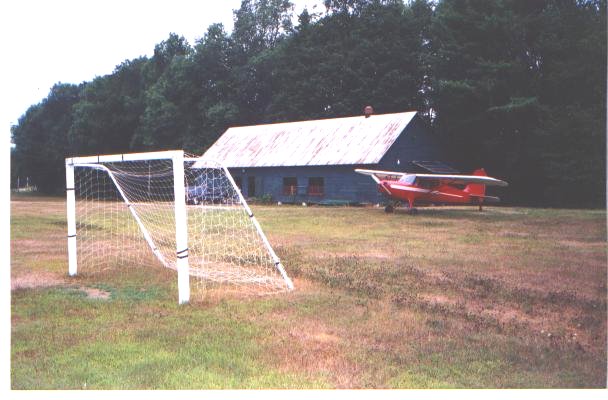 The airplane is parked on the north side, near the Association's communitity building and the soccer goals. 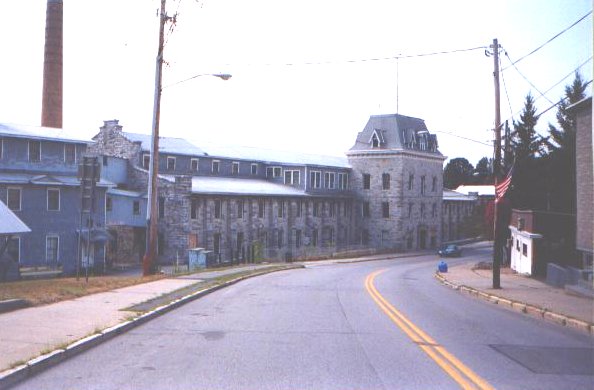 This picture has nothing to do with airplanes, except that the aerial view of the village is dominated by the former Daniel Greene Slipper Company. The factory is an impressive group of buildings clustered along the river, but was closed a year ago.
Plane Talk Archives
Return to Home Page
E- mail Bob Tilden