bobtilden.com
PLANE TALK
February 24, 1999
GOOD DAYS ARE WHERE YOU FIND THEM

Winter. Gray. Once upon a time I lived in a place where the day after a storm would dawn bright and blue, the new cold air having traveled over dry land for 300 miles before reaching me. It was still cold, and winter, but it was often sunny.

I didn't understand my aunt when she talked about the interminable gray of a western New York winter. I heard her words, but with no experience, there was no comprehension. Even the early settlers suffered from what they called "Genessee fever," the depression caused by too many gray days for too many months.

A week ago Saturday was a classic day, gray and snowy in the morning, breaking into a mix of sunshine and snow squalls for the rest of the day. I spent several hours picking my way around the worst of the squalls that afternoon, and my recollection is of blue sky and speckles of sunshine.

Looking in one direction I could sometimes see to the edge of the earth, but off to one side, there might be a lonesome squall, a puffy buildup of cloud, seemingly supported by the column of snow falling beneath it. Wispy veils of snow might be falling from other clouds, and other quadrants might have clusters of squalls. In the opposite direction, there might be a wall of dark gray, seemingly stretching from the hilltops to the heavens. Take your pick, take your view.

At the beginning of the week the weather treated me to several hours of aeronautical serenity. A friend called and stated that we both needed to go flying somewhere... "anywhere, your plane or mine . . . ." Neither of us had been anywhere "fun" for several months, and this looked like a good chance to take care of that problem, and also visit for a while. After some discussion, we took my advice of several weeks ago, and decided upon Tunkhannock, PA.

We left from Dundee in his plane, after deciding that I would fly down and he would fly back. There wasn't much flying to it though. I climbed to 3500 feet, leveled off, set the trim, and sighted a course that would take me just a bit south of Alpine Junction. The air was absolutely smooth and clear. Visibility was 50 miles, and crossing the valley between Spencer and Owego I could see the hills near our destination, straight ahead on course.

We sat in the front seat of the plane and talked, just as easily as if we were in a tavern. The engine droned in the background, and the scenery of the wintry hills slid below us. To the distance on the right, our randomly carved topography gave way to the regular ridges and valleys of the Alleghenies. It wasn't a cold day, nor warm either, but the sun made things quite pleasant.

The little airport at Tunkhannock is just like every airport should be. A paved runway of very modest proportions, right next to town, with a restaurant and shopping adjacent. Its not a busy place, but there are pleasant people and perhaps two dozen small airplanes there. Call it quietly popular. In the summertime, they offer an aircraft campground complete with showers. It seemed to me that there are a bunch of pilots there who know how to have fun with their airplanes.

Gray winters? As a matter of statistics, I suppose so. With the flying I had last week, though, you have to make room for the reality that there are plenty of nice days, too. Even in the pits of February, there is good flying to be found. 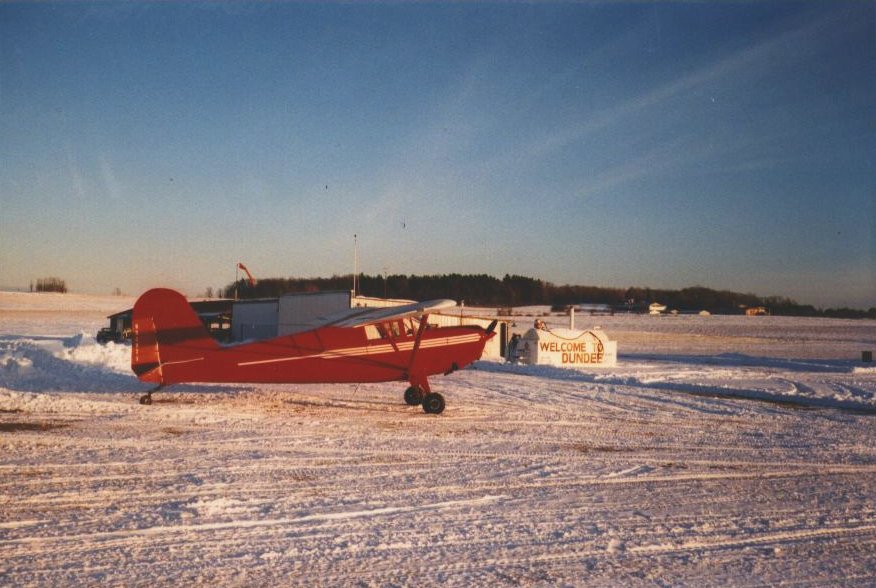 These picturres were not taken on the day that I wrote this story, but they are representative of a good day in the winter. In the picture above, the shadow says that it is mid -afternoon, yet the ground shows no sign of muddiness despite the bright sun. My recollection was that it was quite cold that day. The wind sock shows a light breeze from the north. 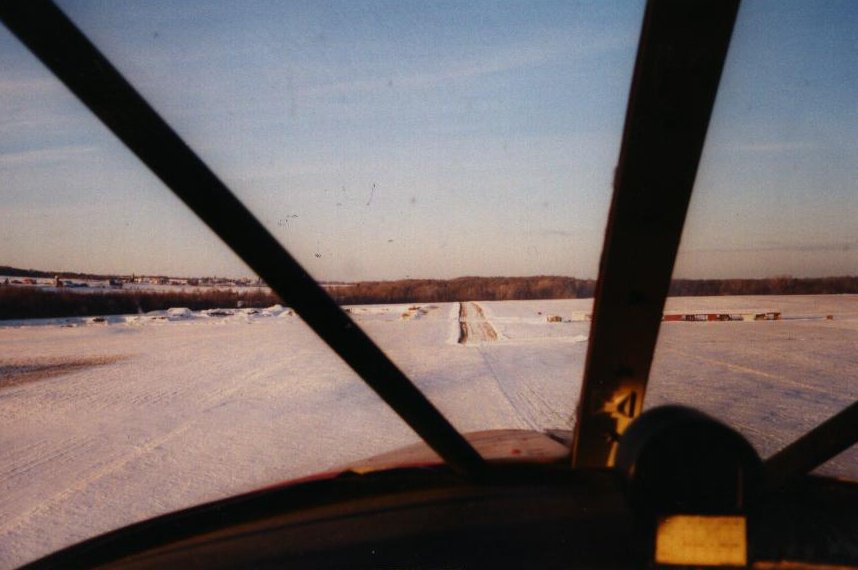 Lined up for landing to the north at Dundee Airport on that mid winter afternoon. The grass runway is about 2800 feet long.