I'm not an artist, so anything I might say on that subject cannot be held against me. Furthermore, as a self- acknowledged ignorante, I am free to trample through all sorts of traditional boundaries and definitions. I have seen plumbers and electricians who are artists, and welders and machinists, too. Their work is fluid, technically correct, and visually pleasing to see and feel. Last week I admired some practitioners of the riggers art.

Riggers, generally, are people who move things that aren't meant to be moved. House movers come to mind, but riggers also move things like giant factory machinery, and set large prefabricated objects into place. Airplanes are usually moved by pilots, but moving a large airplane down a highway calls for people with an eye for the rigger's art.

For months I had wondered how the aircraft haulers were going to move the Warplane Museum's C-46 transport plane from Genesseo to the Elmira Airport. Long ago, the outer wing panels, tail pieces, and engine assemblies were delivered to the lot next to the restoration hangar, but the largest single task was going to be transporting the fuselage to its new home.

Too tall, and perhaps too long, to be placed upon a trailer, the plane's fuselage itself was converted into a trailer. The wing center section was detached from the fuselage (a task that required drilling out more- rivets- than- you- can- imagine) and a specially built pup trailer was placed where the wing had been. The fuselage, suspended from two slings, was placed as close to the ground as possible and an interconnecting framework of steel I beams and wooden blocking was welded and bolted between the airplane and the trailer.

With the fuselage on a set of road wheels, another weldment was created which joined a "fifth wheel" trailer hitch to the points where the horizontal tail surfaces had been bolted. The plane was hitched to a truck and towed down the road backwards for 70 miles. The wing center section, a long and wide trailer load in itself, followed a day later.

I was intrigued to watch the crew reassemble the C-46 over a three day period. The work took place on the Museum's parking ramp next to our hangar, and the plane faced directly towards us as it went back together. The head-on view during reassembly revealed a new aspect of airplane design to me.

For some reason, my mind's eye view of the C-46 had always been its fairly bulbous lateral profile, and I even joked that it looked like a baby blimp as the tow truck pulled it through the airport gate. The plane's demeanor took on a jaunty air though, as the nose was raised to its proper position as the wings and landing gear were reattached. When the outer wing panels were bolted back onto the plane, it suddenly struck me that this plane was the embodiment of all the "happy airplane" pictures that were typically seen in children's books and other whimsical representations in the late 1920s and 1930s.

The C-46s fuselage tapers gracefully into a blunt nose, and the flight deck windows are set into the taper, rather than breaking the smooth lines for a more formal windshield. The wings, viewed straight- on, suggest a graceful upwards sweep. The first lines for the C-46 were drawn at the Curtiss factory in Buffalo in the mid thirties, as a passenger airliner. It was a time when popular technology was closely linked to the concept of speed. Gigantic steam locomotives were covered with streamlined fairings and headed the nations fanciest passenger trains. Everything from automobile fenders to pencil sharpeners took on the streamlined look of graceful speed. It was Art Deco.

The C-46 led an inglorious life, even though it was the largest twin engine transport plane of the era. It spent its life slugging it out in military and civilian transport routes where its payload, interior volume, and range were best appreciated. It was the plane that flew the "hump" over the Himalayas from Burma to China, and the Marines appreciated its capabilities in resupplying its island bases as they island-hopped through the Pacific. As the Curtiss CW-20E passenger airliner, its performance was eclipsed by other designs before the end of the war, and few were sold.

Are the lines of this battered old bird a product of the Art Deco movement? From my vantage point as a certifiable ignorante, I say yes indeed. It is bulbous, but only because its function demands it. Its form is the classic bullet-shaped streamline of the era. Look closely when you get the chance; there is barely a straight line on the entire airplane. Art Deco was inspired by the easy speed of airplanes; it is illogical to expect that this sweeping design movement shouldn't have fed its influences back into airplanes.

Many people might balk at the use of the word "artful" in the same sentence as "C-46", but perhaps the museum will display their airplane in its level flight attitude, rather than sitting on its tailwheel. In its shining repose, we should be able to view the plane as it saw us during its 30,000 anonymous flight hours. 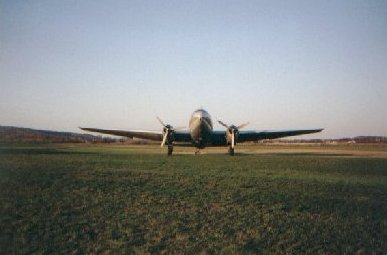 I took these two pictures of the museum's C-46 two years after after I wrote the article. Maybe I was crazier then than now, but you have to see the small air intake at the nose of the plane as a mouth that is saying "oooooooh! in order to visualize the "happy airplane" that I did. 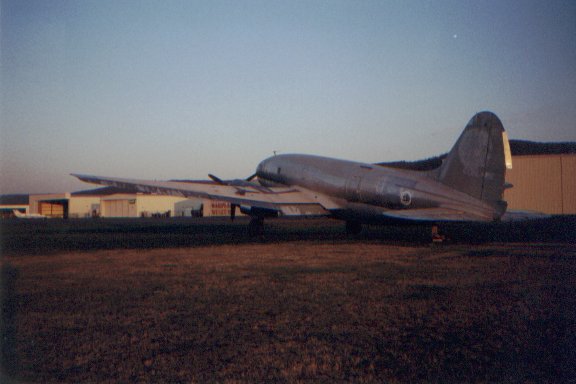